a voice of the many
by Douglas Messerli

Appearing in Japan in 1931, the silent film by Yasujirō Ozu, Tokyo Chorus was unavailable in the US until 1982, and was released by Criterion only in 2008. 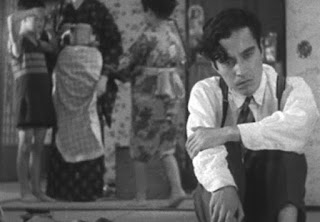 For that version of the film, composer Donald Sosin created a new score. But for inexplicable reasons, every time I attempted to activate the music on the Criterion disk, it failed to function. And I finally watched the film in complete silence. Seeing the film that way, however, made me even more aware of Ozu’s brilliance as a director, since what his simple images conveyed was, perhaps, even more emotional that if it had been accompanied by music.
Although, clearly this early comedy is not one Ozu’s great works, it nicely dovetails with his later concerns about family life and the relationship of father to son, an issue which would haunt Ozu’s films. And like Ozu’s later works, much of the action is show from the perspective of its hero trying to calmly sit on a tami mat to receive his simple tea or dinner. Ozu’s works are filled with eating scenes, and his 1931 work is no exception, as its late scenes occur in a small restaurant, owned by the former drill commander at the military academy hero, Omura Sensei (Tatsuo Saito) tortured the movie’s hero, Shinji Okajima (Tokihiko Okada).
Indeed, the very first scene of this film shows the gangly boys under his command, generally goofing off between maneuvers, with one of their members arriving very late. The narrative then fasts forward to a scene in the Okada household, wherein Okajima’s son and daughter are playing, the son, in particular, dissatisfied with his current toy of a ball. He wants a bicycle like all of his classmates have, and needles his father to get him one, which forces Okajima—a poor insurance worker—to have the boy ask his mother, a stay at-home woman, Sugako (Emiko Yagumo), who is nursing yet a younger child.


On this particular day, Okajima is expecting a bonus, and with his wife’s blessing will spend it to buy the bicycle, a small trinket for his daughter, and a new necktie for himself.


Bonuses are handed out, as each clerk tries to discover the figures without their fellow clerks knowing the amount, a stock comic scene that includes several trips to the bathroom, one clerk losing his letter in the urinal.
With the news of salary bonuses, however, also comes the news that one, more elderly employee,  Rou-Shain Yamada (Takeshi Sakamoto) has just been fired, evidently for selling two policies to customers who soon died afterwards, one of an accident, the other of an illness. Struck with the unfairness of the situation, Okajima demands his fellow colleagues stand up for their elderly co-worker. Yet none of them is willing to stand up to their boss, and when Okajima bravely attempts to do so, he is summarily fired, his bonus revoked.
The remainder of the movie concerns the trials and tribulations of this suffering family, as the young boy, with childlike anger, reacts to the disappointment of having no new bicycle (the family finally determines to buy him one despite their lack of money), and the mother and her other children must now undergo even deeper poverty. When Okajima’s daughter suddenly grows ill, and the family cannot pay for the require hospital visit, Okajima secretly sells all of his wife’s beautiful kimonos. The gentle scene in which Ozu portrays her sadness (an incident which brings her to tears) is quickly balance with her and her husband’s recognition that to save the child’s life they have had no other choice.
Further indignations greet Okajima and his family, as other children refuse to play with their son, his wife must make due with meagre dinners, and the young and dashing Okajima is thrown into the world of Tokyo’s thousands of unemployed. At one point, having met up by accident with his old military tormentor, Sensei, he is forced to carry banners announcing the existence of the elder’s restaurant.
When Okajima’s children and wife spot him, Sugako’s humiliation is made apparent, as she chastises her husband for falling to such a low position. But, when he announces that his old drill sergeant has also promised to find a position for him, she joins in with her husband’s attempt to draw more customers to Sensei’s eatery featuring curry rice made by his wife.
Somewhat like the 1950s Hollywood film, White Christmas, Ozu’s movie invokes Okajima’s former classmates to band to together to help save their former tormentor’s investment, celebrating a large dinner in the small restaurant and each paying their share, with the formerly late arrival again arriving long after all the others. The event is a great success, during which Sensei receives a message that, through his ministrations, Okajima has been assigned to teach English at a school in another prefecture.
Although it is clear that Sugako and Okajima are not exactly happy to leave Tokyo, they do so in good spirits, promising to return to Tokyo when they can. And so Ozu’s “comic” film shifts gradually into a darker film where, as in so many of his works, the loving characters must face up to the difficulties pre-World War II Japan was facing, along with the realities of keeping their families out of harm’s way.
Ozu’s characters generally sacrifice and even suffer in order to maintain a kind of familial status quo which often works against the more harsh realities of the culture at large, which helps to make his films—despite their often assertive belief in Japanese cultural traditions—something with which we can all relate, particularly those who, over the generations, have come to the US to make a better life, no matter difficult, for their own children. In order to succeed, Ozu seems to reiterate again and again in his films, one must often sadly give up one’s youthful dreams.

Los Angeles, Halloween, 2016
Posted by greenintegerblog at 9:41 AM No comments: