Originally, Jacques Demy wanted to film his 1961 Lola as a musical  in color—presumably much like later did in The Umbrellas of Cherbourg and The Girls of Rochefort—but did not have the budget to do so. No matter, since the large-screen black and white picture has a beautiful silvery-like luster, and the tale reads, as Demy himself commented, like a “musical without music,” the sailors almost dancing through the streets and Lola (the wonderful Anouk Aimee) even warbling her “Lola” song (written by Demy’s wife Agnès Varda) in the manner of a French Marlene Dietrich performing The Blue Angel’s Lola Lola. Moreover, as in the musical genre—the genre he used in nearly all of his films—recurrence and coincidence are rampant. 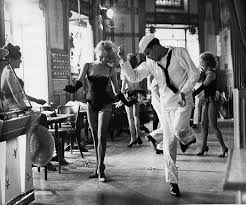 Indeed, nearly all of the characters in this bittersweet tale are connected in one way or another without quite knowing it. The café the young male hero Roland (Marc Michel) spends much of his time is owned by a woman whose son, Michel, has suddenly left his Nantes home years ago. Roland is still nursing a kind of broken heart for a young girl named Cécile (Aimee) whom he knew as a young boy, and, quite amazingly meets another young Cécile (Annie Duperoux),, about age of childhood sweetheart, in a bookstore with her mother, and offers to loan her his English-French dictionary. Soon after, in the street he actually does reencounter the original Cécile, who now, as a dancer, calls herself Lola, having just temporarily returned to Nantes.
Although Lola is momentarily involved with an American sailor, Frankie (Alan Scott), she invites Roland to dinner, revealing that she has a small son and that her lover, coincidentally the same son, Michel, of the café owner, left her, feeling unable to financially support her; she is still very much in love with him, however, and hopes that someday he might return. Describing her “first love” as the most intense, she tells Roland how she first met Michel  as a 14 year-old-girl when the then sailor took her to the local amusement park for a joyful afternoon.
Roland, having just lost his job, has taken on a shady task, as we later discover, to travel to South Africa and smuggle back diamonds into France; but, falling in love all over again with Cécile/Lola, he wants to start anew, and is ready to cancel his travels.


When Roland brings the young Cécile her dictionary, the girl’s lonely, widowed mother, Madame Desnoyers (Elina Labourdette), attracted by the handsome young man, invites him to dinner also, which he accepts. Her daughter, how feeling trapped in her mother’s machinations, is, just like Lola, picked up by a sailor (who happens to be Frankie, Lola’s current lover), who takes her to the amusement park for the afternoon, thus following the older Cécile’s experience.


A number of critics, such as The New York Times’ A. H. Weiler originally found this kind of writing as being “manufactured” and “unauthentic.” And, obviously, if Demy were pretending to be a realist, such events would seem more than ridiculous. But as we now know Demy’s world is a highly theatrical and  romantic one in which falling in and out of love is the only thing that truly matters. If, as Weiler argues in 1962, Demy’s work seems to be a kind of soap opera, over the years we can now recognized that his films were truly one grand soap opera. But that genre, here, results in far better filmmaking than any gritty realist tract or mindless epic adventure.
For Roland and Madame Desnoyers, alas, love lets them down, the former being rejected by Lola because of her intense “first love,” and the later because Roland will not take the widow’s bait. For Lola, fortunately, Michel (Jacques Harden) has indeed returned and has been driving around Nantes for several days in search of her, almost comically crossing the paths of all the other figures, including his longing mother. Accordingly, while Roland sadly is on his way to crime, Cécile/Lola drives off into the sunset with her son and now wealthy lover. The young Cécile escapes to Cherbourg where she intends to become a hairdresser.
For those that have seen Demy’s other works, however, we know that in The Umbrellas of Cherbourg Roland has become a wealthy Parisian jeweler, who steals away Catherine Deneuve from her lover played by Nino Castelnuovo. In The Model Shop, Michel leaves Lola, now in the USA, for a female gambler, Jacqueline 'Jackie' Demaistre, (Jeanne Moreau), who in Demy’s Bay of Angels leaves her wealthy husband (presumably Michel) and falls in love with Jean Fournier (Claude Mann). Even some of Michel Legrand’s beautiful love tunes from The Umbrellas of Cherbourg appear already in Lola.
In short, if first love is the most intense, second or even third love seems to be more successful. If nothing else, in Demy’s world, love is something that must constantly be sought and gained again and again.