art on a shoestring
by Douglas Messerli

Ronald Chase (screenplay, based on a novel by Georges Rodenbach, and director) Bruges-la-Morte /
1975
It’s hard to imagine that only three weeks after finishing shooting for his film version of Lulu, filmmaker and designer Ronald Chase flew to Bruges in order to film his even lesser-budgeted film, based on a novel by Georges Rodenbach, Bruges-la-Morte. The crew was forced to pay for their transportation and food, and the shoot was limited to two weeks. 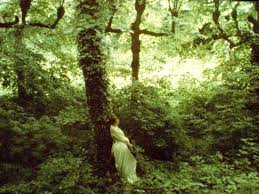 The small budget he had raised came mostly from the New York City Opera, which was planning to use the images as a scrim set for its upcoming production of Erich Korngold's Tote Stadt, which like Bruges-la-Morte is a story of a man obsessed with his dead wife, who discovers a young woman who looks exactly like her and, in the process of trying to woe her “back”, reveals how he had contributed to the death of former wife.


While Chase’s Lulu used music reset to images, Chase’s and Frank Caruso’s Tote Stadt used images set to the music. The film, however, although filled with significant images, is much more conventional in that it does rely equally on dialogue and features professional actors Richard Easton, Nickolas Grace, and Anthony Daniels.
The images of Chase’s film are quite beautiful, and several scenes, particularly those which feature several of the characters, including the dancer who the hero believes looks like his wife, would remind one of the art of Belgium artist James Ensor.
In several respects this work, although set in what appears to be the late 19th century (Rodenbach’s novel was published in 1892), may remind viewers, to a certain degree, of Alfred Hitchcock’s Vertigo. Certainly, the husband’s attempt to transform the young dancer into his dead wife cannot help but call up James Stewart’s attempt to remake Kim Novak into his dead lover, Madeline Elster.


Yet, unlike the great work of 1958, Chase’s film, despite its beauty, seems slow and moribund—a bit like the husband himself, whose every action is repeated daily, from the positioning of the flowers on the table and the lump of honey in his coffee to the medium boiled egg he carefully consumes. This is clearly not a man who permits himself the entertainments of the theater in which the young dancer performs. He is, clearly, one of the living dead, the reason why his wife finally determined to leave him just before her own demise.
This film, finally, is just too, too careful in its artistry, making the world the hero inhabits too much like the treasure-box of the house in which the he resides. If nothing else, the young dancer at the center of this movie serves as a healthy antidote to the death-obsessed husband. Yet it is only when the performers enact scenes from their surrealistic production of Robert le diable does Chase’s work temporarily come alive.
It is hard to dislike an independent film, however, that has done so much with so little in money and time. The film was shown Ghent Film Festival of 1978, and later became available in a DVD edition.