the dimwit
by Douglas Messerli 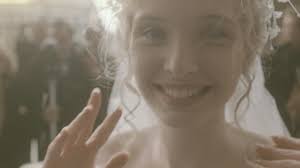 It’s fascinating that, although some critics find Krzyzstof Kieślowski’s White is the weakest film of his Three Colors trilogy, others, like Roger Ebert, Dan Kois, and Stuart Klawans find it the best. If nothing else, it is most certainly the funniest of the three, although in a quite lovingly sardonic way—if those two words might possibly be linked. It is also a film about revenge, or as the director himself put it, “humiliation.”


In the very first scenes of the film it is the hero’s, Karol Karol’s (Zbigniew Zamachowski), humiliation as in series of short scenes a pigeon shits on his jacket and a few minutes later, within a courtroom, his wife successfully sues for divorce, the judge forcing him to stutteringly admit (Karol has been unable to learn French) that his marriage to Dominique Vidal (Julie Delpy) has been unconsummated. In the settlement, Dominique takes all, the hair salon they together ran, and all of his credit cards, leaving Karol (Charlie in English) to play a Polish tune on a comb for coins in the Metro.
There, however, he is met by another Polish exile, Mikołaj (Janusz Gajjos), who offers him a strange job: to kill someone who wants to be dead but doesn’t have the courage to do it himself. But in order to fulfill the offer, Karol must return to his homeland. With no passport or money, Karol hides in a large trunk which Mikołaj carries on as part of his luggage.


Back in Warsaw, the trunk never arrives; it has been stolen, and when the robbers open it in an outlying dump yard, they discover the hiding Karol, attempting to rob him but, upon finding he has no money, beating him instead.
The irony of Karol’s first statements upon finding himself in the bleak white landscape, says a great deal about the dark humor of this film: “Home at last."
The miserable fool finally finds his way back to the hairdressing salon where he once worked, now run by his brother Jurek (Jerzy Stuhr); when he notices that the salon now has a neon sign, Jurek responds “This in now Europe,” setting the tone for the changes in Polish life that the rest of White chronicles.


Karol goes back to work cutting hair, but also finds a job as security guard to a group of men who plan to buy up land outside the city and sell the parcels back to others who, they have heard, are planning a large Ikea-like warehouse in the area. They openly discuss their deal in front of what appears to be the sleeping guard, whom they describe as a “dimwit.”
If Karol is a kind of dimwit, he soon proves that is also very clever, as he secretly buys up some of the sites himself, forcing them to buy them from him. When they attempt to threaten him, he claims that if he dies, he has willed it all to the Church.
Karol also again encounters Mikołaj, who again offers money for the murder of a depressed man, revealing that he, himself, is that man. Buying a gun, Karol shoots his friend—but it is a blank, giving his friend a second choice. Suddenly Mikołaj has changed his mind, and wants to continue living. Indeed, he goes to work for Karol, who has now opened up a seemingly shady import-export business.


It would appear that Karol has now reached the “equality” that he has sought, and which is at the center of this White section of Kieślowski’s triptych. But the now-changed man is also determined to get revenge, to humiliate his wife for her lack of love and refusal to ever join him in Poland. The metaphor, of course, is the relationship of Poland—they had just joined the European Union at the time of this film, and the rest of the continent—a subtheme, as well, in Blue, where the dead composer was working on a symphony about European unity.


Hatching a deeper plot, Karol finds the body of a Russian, which he claims to be himself, sending a letter to his former wife in which he wills her a large sum of money if she will return to Poland for the funeral.
Angrily, she does so, the two meeting and, finally, consummating their former marriage. But soon after, she is arrested for the supposed murder of her husband, and is imprisoned.
The film closes with Karol visiting her in jail, as she, like he in Paris,  unable to speak the language, attempts to communicate with him through hand signs. Karol simply closes his eyes as if to suggest a closure to the affair and that it is time to move on.
Now he is truly equal—with the all the sinister implications of that word. If she has been evil to him, he has now been the same to her as well. “People don’t really want to be equal,” Kieślowski argued in an interview. “They generally mean that they want to be more equal.”
This film, with its “idiot savant,” has a long tradition in Eastern European and, in particular, Polish literary history. And the director’s dark view of the human race is perfectly at home in what Roger Ebert has described as an “anti-comedy.” Yet, strangely, the movie makes few judgments, preferring instead for the viewers to make their own perceptions about the character’s behavior. Besides, we will see the couple briefly, again, in Red, just as we saw them for a few instants in Blue, and, in that sense, perhaps they are more linked to the characters to those films than it would first seem.