the gulf
by Douglas Messerli

When Howard asked me the other day what I was watching, I responded “A French-produced film in Japanese by Iranian director Abbas Kiarostami.” He simply shook his head, a bit in disbelief. 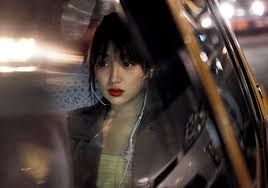 Despite the fact that the director had to work with a series of translators, Kiarostami’s 2012 film, his final work, is quite convincing and moving. A bit like A Taste of Cherry, this work concerns someone near death who discovers a final joy in living. In this case the elderly hero is Takashi (Tadashi Okuno), a retired sociology professor, living on the outskirts of Tokyo. He has lost his wife some time ago, and is now good to family members only for help in writing promotional fliers and other small tasks; his neighbor, who has long been secretly in love with him, spies constantly on his comings and goings. Just before the particular night with which Kiarostami’s movie begins, he has met up with an old student, Hiroshi (Denden), who now works as a kind of high-class pimp for several call girls, and has promised his former mentor a young girl, who is also a sociology student at the university, who works nights to bring in money to pay for her education.
The poor girl, Akiko (Rin Takanashi), is not only attempting to balance school with her nightly activities, but is trying to break off a relationship with her garage mechanic boyfriend, Noriaki (Ryo Kase), who has become increasing controlling and is now demanding that they be married.
Noriaki is angry because, having not told him of her life-style, Akiko has obviously been lying and turning off her cellphone during evenings so that he cannot reach her. Indeed, the film begins with Akiko’s voice on her cellphone as she attempts to convince Noriaki that she is in another establishment with her friend Nagisa (Reiko Mori) instead of being in the café out of which Hiroshi works. She is not very convincing, even though part of what she says, that her grandmother is visiting and that she must cram for a test the following morning, is true.


Now, having promised her to Takashi, Hiroshi has entirely different plans for her, despite her insistence that she is dead tired and has other obligations. In fact, it becomes immediately obvious, in Kiarostami’s film, that Akiko’s entire life is being controlled by men. Even a photo taken of her to attract clients has begun to show up all over the city, allowing her no privacy in her life.
Hiroshi shuttles her off in a taxi, while Akiko plays back her cellphone messages, most of them from her pleading grandmother waiting for her at the Tokyo train station. Demanding the taxi driver take her past the station, she spots her waiting grandmother, which brings tears to her (and our) eyes. There is no place for family loyalty and love in her current life.


Falling asleep in the taxi, she finally shows up at Takashi’s small apartment, on top of a small restaurant and bar where he is seen purchasing food for a dinner the old man has planned for them.


The two fall into a comfortable conversation, but soon after she retires to the bedroom expecting him to join her. It is clear, however, that all Takashi has been seeking is a dinnertime companion and conversation. He stays up along, drinking wine and listening to American love songs, including the film’s title-piece “Like Someone in Love.”


Having little to do each day, he offers to take her to the university (where he also taught) and even waits for her to finish her exam, so that he might drive her to a bookstore for a new text.


Almost from the moment she leaves the car, he notices Noriaki coming out of the shadows and trying to prevent Akiko from entering the building, a quite violent encounter; but, fortunately, she escapes into school building.
Observing the waiting elder, Noriaki insists that he enter the car, where the two have a somewhat testy conversation. Presuming that Takashi is his girlfriend’s grandfather, he attempts to talk about his love for Akiko and ask, offhandedly, for permission to marry her.
Without revealing his true identity, Takashi attempts to dissuade him from the idea, arguing that Noriaki does not yet know enough about love, suggesting that only when he can stop demanding Takashi tell him where she is at all moments, will he be truly ready for a relationship.
After finishing her test, Akiko, obviously surprised by Norikai’s presence, joins them in the back seat, the boyfriend saying he will off along the way. Soon after, however, the boy hears a ping in the steering mechanism, and asks the elderly man to pull over. Looking under the hood he sees that the fan belt is about to break and argues that he should stop by his garage so that he can immediately fix it.
Noriaki calls ahead to order up the part, and expertly repairs the car, but at the last moment another customer pulls up, recognizing Takashi has his former professor. Although Takashi can assure Akiko that he has kept their secret, she cannot be certain that the other man will not now explain to Noriaki who the driver of the car has really been.
In fact, she has reason for fear, and soon after she enters the bookstore is confronted again by the angry boyfriend, who this time brutally belts her in the eye. We do not see their encounter, only observing a crying Akiko after the fact, who calls Takashi, who, having just returned home, drives back into the city to pick up, taking her once again to his apartment for safety.
By this time we certainly realize that, if Takashi has not fallen in love with the young girl, he has taken on the role of her protector, and proffers her a different kind of love that she has apparently not had since she has left her small village.
By this time, however, Noriaki has followed them to Takashi’s house and loudly demands that Akiko come out. Takashi quiet locks the door, but hearing a loud noise outside, goes to the window only to be hit by a missile Noriaki has hurled through the window. The screen goes black.
Obviously, we cannot know what has happened to the old man; has he simply been hurt or has he been killed? One could argue that perhaps he deserved his fate, having procured the young girl for his own selfish reasons and intruded himself on the lives a two younger people who needed to work out the problems in their own lives. In a sense, his behavior with Akiko has not been so very different from his neighbor’s constant intrusions upon his own life. Yet we cannot but see the sad irony of the situation, and certainly Akiko might now fear for her life.
If nothing else, the great director reminds us, once more—both through the visiting grandmother and Takashi—that, even with all their wisdom, the old cannot truly “help” the young after a certain age. The problems they face will always be of another time, or, as one of the Jets of West Side Story argues against the ministrations of Doc, “You were never my age!”
This elegiac film reveals the gulf between young and old, along with the helpless isolation and loneliness of the individuals on both sides. Any attempt to reach out can only be perceived as a simile, “like someone in love,” instead of actually offering a direct commitment. As even Takashi realizes, through the ridiculous sophistry of the famous Doris Day song, “Que sera sera / Whatever will be will be."