borders that can’t be crossed
by Douglas Messerli

Director Chantal Akerman takes Joseph Conrad’s fiction, Almayer’s Folly, and transforms it from a tale of colonial angst into a kind of feminist fable about how the patriarchal forces conspire to destroy even the women (and, in this case, girls) they love. 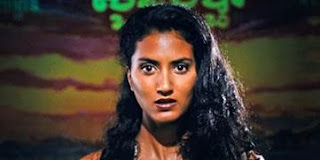 Indeed her film of 2011 begins with a murder, as a former servant of Captain Lingard, Chen (Solida Chan) walks slowly into a dive where Daïn, a former small-time smuggler and now a karaoke-like performer (lip-synching the words to the tacky Dean Martin ballad “Sway), is on stage with his girlfriend/wife Nina. Chen suddenly mounts the stage and kills Daïn. The backup girls swaying along with the lyrics all scatter, except one, who, almost as if drugged out of her mind, continues her pointless maneuvers, until someone finally gets through to her, announcing that Daïn is now dead; she takes up the microphone and quietly and quite impressively sings, a capella, Mozart’s Ave Maria.
We have no idea who she is, and what is her relationship to the performer. But by featuring her so immediately at the start of her film, Akerman makes clear that the remainder of the film will be her story, not that of the title character’s nor even the singer’s with whom she was performing.


The woman we first encountered is Nina (Aurora Marion), the daughter of Almayer (Stanislas Merhar) and his Malaysian wife. And in the very next scene we are introduced to her again, this time as a kind of wild child at play in the river with young boys. Soon after, she is called to come home by her mother, Zahira, the maltreated wife of Almayer; and immediately after she and the girl go on the run, trying to escape Almayer and his vising guest, Captain Lingard (Marc Barbé) who has come to take Nina away to assure her of a proper European education.
In the novel we learn that Lingard is an entrepreneur and explorer who has used Almayer’s belief in the existence of secret goldmines to his advantage, even insisting that Almayer marry the Malaysian Zahira until Lingard finds the mines and brings home great riches. Little of this, except for his role as marriage broker, is made clear in Ackerman’s film, and we are left to speculate upon what the relationship between the stronger Lingard and the weaker Almayer might really be; indeed the film seems to hint at a kind of homosexual kinship, particularly since the two Dutch males share handsome faces and lean bodies, and we quickly perceive that Almayer, in particular, is disgusted by the dark-eyed sensuality of his wife. For him, women are idealized as gentle, broad-faced beings, presumably individuals capable of daily hearing out the woes of their male companions.


At no point does Akerman make clear what is essential in Conrad’s work, that Almayer has built his “lavish” house on the Pantai River because of hearing that the British were soon to conquer the river, and that he intended to welcome them while serving as a lucrative trading post. Locals have come to describe the place as “Almayer’s folly.” The invasion never occurred, the goldmines were never discovered, and all Almayer now has is his daughter. Now when he and Lingard track down Nina and Zahira, even she is taken from him. The loss of her daughter drives Zahira mad.


Yet, as I mentioned earlier, this film is not about them, but about Nina, who as a girl of mixed-blood is tortured by her teachers and schoolmates, is reprimanded again and again for her demeanor, even the very way she walks. Although she excels in her studies, any normalcy of experience, certainly any joy she might have, is expunged from her life until Lingard, who pays for her education, dies. Expelled from her school, Nina wanders the streets, taking in a world that has been previously removed from, even eating the hot native dishes she has been denied. Finding a boat, she returns home, to the delight of both her father and mothers. But she remains in a state of near-catatonia, hating the man who, like Isaac, dared to sacrifice her on the altar of his European-based gods.
Like a zombie the teenage girl now wanders the jungles, encountering Daïn, who she promises to meet in the night. During a typhoon-like storm, he nearly drowns, but she saves him, while killing a companion who might have reported her to Almayer, embracing him in a kind of sex marriage. By the time Almayer discovers the couple, she is passively committed to a man that even she knows can never truly offer her anything she might seek. But then, as we see in the very first scene of the film, her life has already been stolen, and she is now little more than an automaton used by others for their own purposes.
Devastated by the loss of his daughter, and recognizing that she will never find happiness, Almayer can still not quite comprehend how he has destroyed her through his belief in European cultural superiority. In fact, although he cannot recognize it, in Akerman’s film, it is he who is the savage.
In Cinemascope critic Eva-Lynn Jagoe describes the final scenes quite brilliantly:

What we witness in Akerman’s final, extended shot is
Almayer’s tortured oscillation between opening and shutting,
knowing and not knowing: we watch him understand something,
deny it, confront it again, shrug it off, not be able to control
the spill of tears that have irrevocably exposed it to his
consciousness. It is as if he is trying to create his own
montage, and cannot make the film cut, jump to another scene.
His folly of not knowing, of not opening the door to an
understanding of his motivations and his manias, turns, at the
moment of recognition, into a madness that condemns
him to a harsh and unavoidable downfall. Thus he
says, twice, “Tomorrow I would have forgotten my daughter.”
Not “I will have forgotten” but “I would have…”

What in Conrad’s hands was an adventurous love tale—in his version Daïn was a Malayan prince—is in Akerman’s imagination a tale of domination, the men, quite literally, sucking the life out of the formerly vibrant young girl, as well as her mother. The colonial world and other such patriarchal systems, Akerman suggests, create borders you cannot cross.