looking to live
by Douglas Messerli

Michelangelo Antonioni’s film Red Desert, like several of his other works, has virtually no plot. One could describe a series of events through which its characters move, but to do so sounds a bit like describing a day of shopping or a day at the office: “first I did this and then I did that.” Take a look at the Wikipedia description of the film’s plot as a case in point. 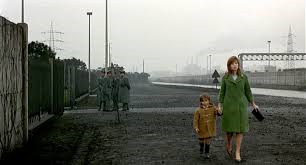 Everything that truly matters in this film lies within its images, in the brutal (and yet, at moments, beautiful) industrial landscape near the Italian town of Ravenna, in the way Monica Vitti as Giuliana stumbles across the barren wasteland with her young son, Valerio, or how she sits musing on a small staircase sitting stool, the terrifying vision of a large quarantined ship suddenly skirting the family fishing shack. The world of Giuliana and her husband Ugo (Carlo Chionetti), even in its overly-bright painted colors, is clearly a sick one, a society to which Giuliana is now suddenly unable to adjust. Even the houses and streets of the nearby town seem coated in chalk.
If Giuliana’s recent automobile accident has left her physically unhurt, it has permanently affected her psychically, and no matter how he might try, her husband will never be able to regain her trust or love.


Enter an equally lost soul, Corrado Zeller (Richard Harris), a would-be industrialist, like her husband; but this former mineralogist—having simply inherited his father’s business—is equally weak and is just as confused about how to deal with “reality.”
For most of his life he has simply wandered the world, and is now seemingly searching for competent employees. A bit like Giuliana, he intends to run a business without being sure what it actually is. It is little wonder that he and Giuliana immediately link up. As he puts it:

You wonder what to look at. I wonder how to live.
Same thing.

But, of course, it’s not the same thing. Corrado seems even more disconnected to the world around him in his incessant wanderings than does Giuliana in her locked up world, filled with smoke and poison gasses. And even though the two share a one-night affair, he clearly cannot provide her with a way out of the hell her husband and his generational peers have created.
As several critics have pointed out, Red Desert is one of Antonioni’s bleakest films, simply because the central woman figure in this work has no strong male figure to who she might, even temporarily, turn. At least in L’Avventura, she could roam the country with an attractive young man at will; here she is trapped in an industrial landscape where yellow gasses are belched into the air. If there is a kind of beauty to the industrialism—the kind of beauty that Demuth and other early 20th century American artists found in the American industrial landscape—as she tells her son, only the birds survive this poisonous air, since they can fly above it.


The film leaves her and Valerio very much trapped below.
If in Antonioni’s previous films, the crises the character’s faced were existential, the figures of The Red Desert face a kind of cultural malaise that no individual can seemingly escape, a kind of world the director will feature, as well, in his next film, Blow Up, wherein even reality is difficult to discern. At least Giuliana recognizes that her world is a sick one, while the hero of Blow Up is even uncertain about what is real and what’s an illusion. If nothing else, Giuliana has the evidence, and shares it with us.