Abbas Kiarostami (writer and director) Shirin / 2008
by Douglas Messerli
Abbas Kiarostami’s 2008 film, Shirin might be described as a film without a film, or a work of “film effects.” Throughout this almost two-hour movie, we see nothing but an audience of mostly women, head on, as they watch and react to a film on the screen which we never see but can hear.
The story, a kind of melodramatic version of Tristan and Isolde concerns a 12th century Armenian princess and later queen, Shirin, who falls in love with a Persian prince, Khosrow. He is equally in love with her, but in order to save his kingdom he must ally with the Romans, marrying a Roman woman. Each time the would-be lovers come close to one another something happens to keep them apart; finally Shirin even gives up her kingdom in order to live in Persia, although her love can never be consummated, and she and Khosrow die without ever knowing each other’s love.
This is what we might call in the US, a “woman’s pic,” and we observe several of the dozens of women watching it in tears or, at the very least, with their faces in great consternation. Almost all of them, except French actress Juliette Binoche, are Iranian women, and Kiarostami presents us with several types, each of whose reactions are somewhat different from the others.
Strangely, even without being able to view this film—or perhaps one should say because we are unable to view the film—we must imagine it, perhaps, as my case, as a splendiferous color spectacle, laced with Persian miniatures. However we might conjure it up, the only things we have to work with are the dialogue, the music (a historical film score by Morteza Hananeh and Hossein Dehlavi) and visual clues from the faces of the audience members. 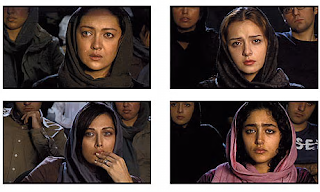 In some respects, the central characters’ love for each other is not unlike our own relationship with the missing images; we desire to see the missing film, and so must create it for ourselves, crafting it in our own image of that desire
Apparently, Kiarostami filmed these women (some say in his own home) by simply asking them gaze at a series of dots above his camera. Even he had no idea what movie he might pretend they were watching, and only at the last moment chose the famous 12th century tale.
It reminds me some of what the Iranian-born sculptor Siah Armajani once told me about his childhood film-going experiences. A local theater owner would gather pieces of American and British cinema that had been cut from the films for purposes of censorship. He’d then link these pieces together in a loop and, while showing them, create a dense narrative for his mostly youthful audiences against the evils of the West. “Never before or since,” Siah sighed, “has film been so immersive and exciting. We had to imagine those narrative connections which these strange ‘forbidden’ images only hinted at.”
In a sense, Kiarostami’s work requires the same sort of process, while even further cleansing his art of images, as if to explore how to make art without the actual art. And in this manner, the filmmaker has perhaps made one of the purist and theoretical works of cinema ever, forcing us to become directors of his story.
Los Angeles, New Year’s Eve, 2016
Reprinted from World Cinema Review (December 2016).
Posted by greenintegerblog at 9:41 AM No comments:

getting it all by giving in
by Douglas Messerli

Jacques Feyder, Robert A. Stemmle, and Bernard Zimmer (screenplay, based on a story by Charles Spaak), Jacques Feyder (director) La Kermesse héroïque (A Carnival in Flanders) / 1935

It may be hard to imagine a proto-feminist film, directed by a man, coming out of France in 1935, but that’s very much what Jacques Feyder’s Carnival in Flanders is. 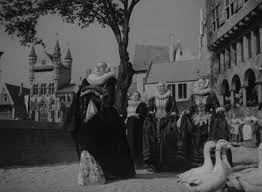 Ready to celebrate their annual carnival, the Flemish town of Boom, is busily preparing decorations in the square, while the small city’s Burgomaster and his associates pose for a painting by the local artist, Julien Breughel (Bernard  Lancret), who is in love with the Burgomaster’s daughter Siska (Micheline Cheirel); at the very moment that Breughel asks for Siska’s hand in marriage, however, her father (Jean Murat) is completing a deal with the butcher (Alfred Adam) to marry her in return for regularly purchasing his livestock—an agreement which his strong-willed wife, Cornelia (Françoise Rosay) finds to be obscene.


In the midst of these events, two emissaries of King Phillip II, suddenly charge into town announcing, via a letter, that the next day The Duke d’Olivarès (Jean Murat) will be camping there for the night with his soldiers. Recalling the Spanish pillage and rape of citizens in Antwerp, the town leaders are horrified, and determine to hide out during the visit, the Burgomaster himself determining to play dead.


Perceiving that the men of Boom will do nothing to protect them, the women,  headed by the Burgomaster’s wife, declare their own war, wherein they plan to readily woo the rowdy visitors with wine, food, and sex.


The Spanish arrive, and to their delight the beautiful women, dressed in their best gowns, gladly give of themselves and their larders, while their men hide and cower. Some of the women give of themselves so willingly that it looks a bit like collaboration rather than accommodation. In one case, The Lieutenant apparently even finds a willing homosexual encounter. But others, like Madame la Bourgmestre, entertain with such wit and resourcefulness, that she wins over the Duke and even gets the corrupt priest (who boasts, in a kind of dark comic moment, he has been an interrogator of the Inquisition at Toledo) to marry Siska to Breughel. So pleased is  the Duke with the villagers that, as he leaves, he grants the entire city a year without taxes, which the Burgomaster’s wife immediately attributes to the work of her husband.
Alright, these early feminists used the sleights of their sex to get what they wanted, but they have, nonetheless, shown their power and control over their menfolk. In this somewhat inverted Lysistrata, the women not only take control but get awarded through the love of the far more virile Spanish, for their actions.


Feyder was vilified by many for his themes; and, two decades later, Truffaut singled the film out in a broadside against some French classics: “In this regard, the most hateful film is unarguably La Kermesse héroïque because everything in it is incomplete, its boldness is attenuated; it is reasonable, measured, its doors are half-open, the paths are sketched and only sketched; everything in it is pleasant and perfect.” One must remember that only a year after this French-German sponsored production, the Nazis were in Paris, and collaboration would become a real issue. Both the film’s director, Feyder, and its lead, Rosay fled to Switzerland.
But watching it yesterday, I truly enjoyed its lusty implications, and applauded the women of Boom for their abilities to save their otherwise exemplary lives by simply using the ploys of their gender. Moreover, in its reliance on the tradition of Dutch painting, this gentle comedy tells us more about life in 17th century Flanders than reading many an historical tract. Surely it was a patriarchal, bourgeois society, but in Feyder’s joyful rendition it was allowed to enjoy itself if only for a night.