the magical unicorn
by Douglas Messserli

Wolf Mankowitz (screenplay, based on his novel), Carol Reed (director) A Kid for Two Farthings /
1955


Even if Carol Reed’s 1955 film A Kid for Two Farthings is, at moments a bit too sentimental, it is nonetheless a great lost film—at least for Americans. In Britain, even if it was a highly criticized film, it was one of the 10 most popular movies of the year of its release. In the US it is hardly remembered. 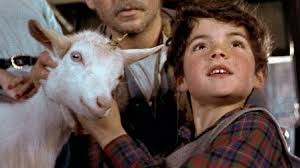 Much like Reed’s Oliver Twist, in fact, this film is about a young boy growing up within a large and robust London Jewish community, where he is basically scolded and ignored but yet loved. The real parent to the young boy, Joe (the wonderful child actor Jonathan Ashmore) is the pants presser Kandinsky (David Kossoff) who loves the child and provides him imaginative possibilities, despite (we find out later) his own abandonment of just those treasures. Add to the mix, Kandinsky’s assistant, Sam (Joe Robinson)—an obsessed muscleman, seemingly addicted to images of other world champions of the muscle-world, which might have easily suggested he was gay in another film—who is here in love with a beautifully, newly dyed-blond, Sonia (Diana Dors). For my taste, she’s a bit too much like Jayne Mansfield, not my ideal of a dutiful wife, but for Sam’s she’s just fine.


In the midst of the bustling market scene of Petticoat Lane, the young Joe grows up, with his father missing in a dream world of South Africa—he and his  mother living over the Kandinsky store—with the boy’s deep love of animals, chickens and other birds, who somehow cannot survive in this environment. Kandinsky, speaking metaphorically of survivors (with a heavy reference to the survivors of the Holocaust) inspires the young, easily believing child, with visions of unicorns, whom he declares have died off because of abuse, with just a few surviving—of course, given his father’s travels, existing still in Africa.
The gullible child, after his latest chick dies, goes on search in this writhing market for a unicorn, finding it in a one horned, scrawny goat, which he buys for a few farthings, bringing it home after a series of adventures, to find that, in fact, the poor animal can indeed create miracles. After four years of a potential relationship, Joe does finally buy a ring for his lover, Sonia. And to pay for it,  despite his beautiful “male physique” commitment, he determines he will participate in a series of fake wrestling meets to pay for it. The only problem is that this Adonis, despite his lovely muscles, is not a successful wrestler, nor a born killer, as is his would-be competitor, the ugly Python (Primo Carnera). Like a British version of Anthony Quinn, Camera is a tough, who probably could easily destroy the pretty boy Joe, who wins his round with the Python by fighting a fixed fight with before his scheduled grudge battle.


Meanwhile, the lovely goat/unicorn seems to produce other wonders, actually conjuring up a real Patent Pants Presser for the elderly Kandinsky and other wonders. Perhaps this miracle unicorn is actually a wonder; but clearly it is Joe’s own belief in the world which accomplishes such amazing changes. Kandinsky makes a deal with Sonia that, if he wins the match, he will make him partner in his business if the fiancée is willing to give up her dream of a diamond ring and a new bedset she’s purchased on time; and, of course, against all odds, Joe wins the wrestling match with the Python, and she is perfectly ready to make the new commitment, which brings the eletric pant presser to his door.


Even if it’s not quite believable, how could you dislike a movie such as this gorgeously-framed color film? It reminds me a bit of Frank Capra’s remake of his beloved Christmas tale, Pocketful of Miracles, but here the miracles seem real: the magical goat dies, and the always passing Rabbi, with his own horn in hand (a gramophone that plays music), passes at the very moment that the totally caring Kandinsky secretly buries the boy’s pet. It’s not really magic, novelist and screenwriter Wolf Mankowitz makes clear, but it’s as close in this world it’s as you can come to it. And if that makes anyone tear up about the possibilities of the whimsical, so much the better. Maybe we can truly also hope for his father’s return home—but that’s another movie. There are enough miracles in this film that I can’t even wish for more.