When I first saw François Truffaut’s The Wild Child in 1970, I recall being unimpressed; its quiet documentary-like style, taken mostly from the journals of the 18th century Dr. Itard—who took in the child and attempted to civilize him—appeared charmless and uneventful, almost as if I were watching an educational study. 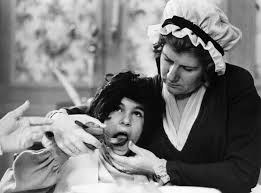 Seeing it again yesterday, after a span of 46 years, I was emotionally moved and even shed  a few tears. I do recognize that I have grown a bit more sentimental with age, but I believe that  the movie seemed so different this time around because I could fully sympathize with both the doctor and the child, even though Truffaut distances them through his black-and-white, silent-film like cinematography (particularly in its use of the iris to close scenes) and tells the film’s “story” in a quite dispassionate voice that makes clear that it is the expression of a written text. The costumes are those of another century. Yet what we see expressed, particularly through the terrified and confused  “wolf-boy’s” eyes, is completely in the moment.
Beautifully performed by Jean-Pierre Cargol, a gypsy boy the director found in the streets of Montpelier, and quietly “directed in front of the camera” by Truffaut himself, this enfant sauvage somehow represents all of our collective memories of coming into the world in which we are gradually tamed and civilized. Like Truffaut’s character of The 400 Blows and several other films—in fact The Wild Child is dedicated to the actor, Jean-Pierre Léaud—this child must, at times, be punished, even though the error of his ways is truly not his fault; as the doctors speculate, he was meant to have been killed and left in the woods, but miraculously survived.
But Victor, the name he finally takes on for his own, is far more wild and scarred than Antoine Doinel ever was, and many authorities of the day speculated that he was permanently deranged.


At first, when Itard receives permission to take him into his own house, it almost appears as if the boy is beyond help. The child seems not even to be able to hear at first, because, like Helen Keller as a child, language has no meaning to him: he cannot connect the quiet noises adults make with anything of significance since his is a mute language of grunts and groans. He must be taught to dress, to walk, to wear shoes, taught how to eat and drink. Yet by learning those very acts, the child—Itard and the movie’s audience gradually perceive—does have intelligence and the ability to learn. He even learns to say one small work in a high squeaky voice, “lait”—although he refuses to say it before he receives the milk, only after, clearly being unable to see language as a tool of transaction.
Itard also perceives that the boy has an innate desire for order and uses that to connect images and the real objects, and finally words and the objects themselves. At one point, he even  tests the child’s ability to comprehend justice by insisting that the child’s correct answers are mistaken and threatening to punish him in another lock-up. The boy screams and strongly resists the threat, proving that, indeed, he recognizes what is unjust.


But he is still somewhat like a trick-dog; he knows the correct movements without comprehending what accomplishing them means. To push those boundaries, Itard, sometimes ruthlessly overworks him in his attempt to have the child make connections—so much so, at times, that even his gentle housekeeper, Madame Guérin (Françoise Seigner) must remind him that the boy should have more time in his beloved outdoors.
One must remember that this film was made at a day when many of us had newly romanticized wild and near-naked living styles, and Truffaut was highly criticized for what some saw as his own notions of education and child-care. Mireille Amile, for example, wrote: Itard’s “civilizing mission” was unacceptable. “How can the rebel of The Four Hundred Blows place himself alongside the oppressor, even as sympathetic as Itard?”


Their presumption that Truffaut shared all of Itard’s viewpoints, I believe, is rather absurd. Ways of raising children before the later Victorian and modern idealization of childhood, were simply different than ours, and Truffaut is portraying Itard not cataloguing his own attitudes.  Children were often represented as little adults, not growing human beings. Moreover, Itard himself, clearly recognizing that he was working with a sentient being, was under the gun so to speak; if he could not post demonstrable results, he was fearful that the government would take the boy away and, very likely, as Itard’s colleague, Professor Philippe Pinel had argued for, place him in an insane asylum.
After all, Itard did take his housekeeper’s advice, even letting the child play alone outside, with both of them fearing that he might return to a savage state in the forest where he could be killed by a wild beast (he’d clearly had to fend them off previously, as his scars demonstrated) or even be killed by a human hunter mistaking him for prey.
But even before this, we must remember, Itard had taken the child to a nearby farm, where Victor learned to drink milk, and took joy in being pushed about in a wheelbarrow.
In short, Itard was no villain for trying to civilize his new charge as quickly as he might, if for no other reason that he wanted to protect him.
It is Truffaut, moreover, which directed the acting child how to demonstrate the confusions and frustrations that so touch us about the character. And when, finally the child does stay away for an entire night, it is natural that we fear for his existence, just as do Itard and his housekeeper.
But the boy’s return says it all; even if he is not wholly domesticated, he can no longer live in nature, but must learn to survive in the civilized world, so that by film’s end we do quite know whether or not to celebrate or cry. Yet every day, we do, in fact, celebrate the little indications that a wild baby is gradually learning to imitate us: its first steps, its first words, the first sign that she or he comprehends the lessons being taught at school. To learn all of these things in a few months is quite impossible, and yet Victor made some radical changes. Perhaps we should just applaud all three of the central figures of this not always gentle film.