Jean Renoir (writer, based on a play by René Fauchois), Jean Renoir (director) Boudu sauvé des eaux (Boudu Saved from Drowning) / 1932
The first of Jean Renoir’s masterworks, Boudou Saved from Drowning, was based on a boulevard farce by René Fauchois. I’ve never read that play, but it’s certain that Renoir’s work, which takes it regularly out of the Lestingois home and bookshop, is far superior in that, through those maneuvers, it connects the bourgeois activities of the Lestingois family to the Paris at large. 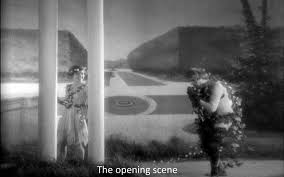 Both husband and wife are represented as sweet-meaning fools, Madame Lestingois (Marcelle Hainia) being a woman more interested in money and order than anything else, and the gentle bookseller (Charles Granval) having illusions of being a great humanist. In fact, as we see from the beginning of the work Lestingois is simply an old lecher, fawning (quite literally) on his maid, who readily accepts his attentions, probably with illusions that she might eventually replace her mistress.
Yet, as critics have pointed out, Renoir’s sweet satire does not openly mock these figures as much as he simply points out their own self-delusions, and to do that even more effectively, he deposits Boudu (Michel Simon), a man with no delusions and no social restrictions whatsoever, into their home after Lestingois valiantly saves the tramp from drowning.


Once in their home, this pagan (not at all like a hippy, with whom Pauline Kael compared him: most hippies were rejecting their own traditional upbringings, while Boudu has had so such past) wreaks havoc simply by clumsily lumbering through their well-kept quarters, sleeping on the floor, spitting into the bookseller’s sacred volumes, wiping his grubby hands on Madame Lestingois’ undergarments and seducing her while simultaneously attempting to entice the maid, Chloe Anne Marie, into his arms. Renoir presents him a bit like a Charlie Chaplin figure, who instead of desiring to become respectable, is irredeemably wild. It is really Boudu, not Lestingois—as he sees himself—who is a kind of Pan, the god of the wild and the purveyor of panic.
Indeed out first glimpse of Boudu is in the forest, so to speak, in the woods of what appears to be the Bois de Boulogne, tending his beast, a ruffian dog which escapes his arms and goes missing. Is it any wonder that when he loses his charge and, accordingly, has lost his purpose, Boudu wants to drown himself. He has no desire to be “saved,” let alone be reformed. Even Emma Lestingois realizes this in her deliciously comic comment that if they are going to attempt to save tramps, they should be from their own class. Boudu is truly classless because he is classic, a type that has appeared time and again in films. He reminds me, for example, of the inveterate hobo played by Walter Brennan in Capra’s dark comedy, Meet John Doe, who describes anyone living indoors as “healots.”


If in the end, it appears that in Boudu Saved from Drowning might have been converted to the bourgeoisie through his marriage to Chloe, Renoir delightedly shows Boudu’s return to nature through a second “drowning”—by intentionally tossing the entire wedding party into the river. This time we recognize that this creature of nature can swim quite wonderfully, as the other cultural “swimmers” must be saved at the very moment he lustily swims to shore, divesting himself of his societal attire by trading clothes with a scarecrow before heading back into the wilds. Disorder has been restored.