Jean Renoir | Partie de campagne (A Day in the Country)

as the sun breaks through the rain


Filmed by Jean Renoir in 1936, A Day in the Country apparently was never completed, evidently because of bad weather. Others have argued that Renoir always intended this work to be about 40 minutes long, and planned to end the film as it does, in a rainstorm. Whether or not he was planning a scene in Paris is open to speculation, but the work certainly does not suffer without it.
Indeed beginning and ending this film at Marlotte, where Jean’s father Auguste used to come to paint, seems perfect, and the almost inconsequential series of events it details, accordingly, have a kind of magical and celebratory quality. 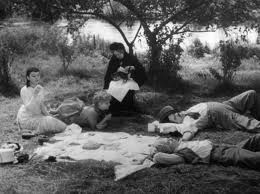 The filming itself, however, was rumored to have been a dour affair, with numerous quarrels and much drunkenness. Perhaps the fact that Renoir made this work almost a family affair—himself playing a patron of the inn, his son Alain taking on a minor role, as did his lover Marguerite, while his nephew Claude was the cinematographer—created some of these tensions, but the film, in its quiet nostalgia, certainly does not reveal these frictions.
A city family, like so many others who visit the country on weekends, suddenly arrives at a small inn, where the father (André Gabriello), mother (Jane Marken), grandmother (Gabrielle Fontan), young daughter Henriette (Sylvia Bataille), and her dumb-witted fiancée, Anatole (Paul Temps) all plan to celebrate a picnic in the grass, despite the growing darkness of the clouds.


While they are swinging nearby, Mother and her young daughter are quickly spotted by a couple of local boatmen—styled to look very much like Laurel and Hardy—who decide to lure them away from the menfolk by presenting the two men with fishing rods and proposing a boat trip to the women.
It works almost perfectly, with, oddly enough, the Hardy-like figure Henri (Georges D’Arnoux) taking up with Henriette, and the more daring Rodolphe (Jacques Brunius) boating with the almost equally flirtatious mother.


We see very little of the mother’s sexual encounter, but we watch Henri gently touching the girl as her hand pulls his hand away, and she turns from him before joyfully giving herself up to a kiss and lovemaking. The scene has to be one of the most quietly beautiful seductions ever represented on film. Critic Peter Labuza describes it nicely:


And then comes the encounter. A few playful grabs
rejected, but then, suddenly, a kiss. Is it romance? Is it
rape? Is it the thrill of passion? A fear of it? The first
time I viewed A Day in the Country, I felt angered
by this scene’s inscrutability, that Renoir would
contain so many contradictory emotions. Revisiting it,
however, Sylvia Bataille’s reaction seems to contain
the universe of emotions — as André Bazin described,
“In the space of a few frames she expresses all the
disenchantment, the pathetic sadness, that follows the act
of love.” It is as if her entire past — and then her future —
becomes clear.


The rain begins and Renoir closes the scene slowing moving with the river downstream, and then speeding off.


Years later, on an autumn day, Henriette revisits the island with her clownish husband, Anatole, who is now taking a nap. There she reecounters Henri and quietly expresses her daily memories of their brief time together. As Anatole wakes up, Henri hides until the couple leave.


Renoir’s lovely featurette was finally released by its producer in 1946, ten years after it was made. The film was first shown in the US in 1950.
Los Angeles, December 12, 2016
Posted by greenintegerblog at 8:02 AM