the most beautiful slum in the world
by Douglas Messerli

A favorite “underdog film” at the Telluride Film Festival in 2015, the Irish-Cuban film Viva went on to be the Irish nominee for the Oscars. While it was excluded from the final list, it still remains an amazingly powerful small film, despite its rather formulaic story. 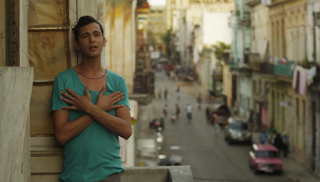 Yes, this is a gay tale about a young Cuban boy, who, after losing his mother in death and losing his father to prison as a toddler, survives as a neighborhood hairdresser, often going unpaid by his equally poverty-stricken elderly woman neighbors. He picks up a bit more money by working on the wigs of a local drag club at night. And when things get really tough, he picks up mostly tourist customers on the Malecón as male prostitute.


Jesus (Héctor Medina) may be slightly built and rather effeminate, but he is also savvy about surviving, and realizes that his second profession doesn’t last for long. And since he’s inherited a varied collection of major female singers on record from his mother, he becomes fascinated by the performing drag queens, particularly his boss, Mama (a terrific Luis Alberto García), and more to get on in the world than any innate desire, he’s interested in giving the drag club routine a try. When one of the performers goes missing, he auditions for her place in the show.
Putting on a short skirt which, as one nasty queen notes, reveals his cock from Cienfuegos, he becomes (after a quick glance at a nearby magazine) Viva. She’s not very good, but Mama knows a needy hire when she sees one, and casts him for a single performance. Again, she’s not a natural, and more customers leave than remain through his performance. Yet Mama needs Jesus for her wigs, and gives him one more chance. Another performer, Cindy (Luis Manuel Alvaarez) gives him some good advice: interrelate with the audience. Even if you don’t like to the look of someone, make him feel that you love him.
Unfortunately, Viva, performing much better, chooses the glance of a stranger to the bar, who ends up slugging her in the lip. She has not recognized her own father, come back from his prison stint.
An ex-boxer, Angel (Jorge Perugorría) is a homophobe, and even more upset that his own son has turned out to be a drag queen. We all know what will happen next. As he moves in with his son in the small run-down apartment, he won’t permit the boy to perform, so in order to bring food to the table, the boy has no other choice but to return to prostitution, an odd predicament which he does not share with his father.
Angel attempts, on the basis of his old reputation, to involve himself in the local boxing club as a coach; but even he knows he’s far beyond his prime, and thus, although we hate his character, we feel for him as well; and so does Jesus, who does his best to cook up dinners of rice and beans, while still keeping up his job of dressing the drag performers wigs.
Cuba, with its poverty-stricken beauty, a country filled with individuals who make do with the very little they left, is caught, in-between clumsy, hand-held camera maneuvers, in the lens of cinematographer Cathal Watters. Even Angel, poised on the balcony of his son’s squalid apartment comments: “It’s the most beautiful slum in the world.” Perhaps no one in Cuba might say that—the film was scripted by Irish writer, Mark O'Halloran and directed by Paddy Breathnach—but it’s an apt statement. And the movie, which now begins to wallow a bit in the tension between Jesus’ new Daddy and his drag-queen Mama, is equally on target.


Yes, we all know where this movie has to go. Despite all the absurd sacrifices of his boy and heart, Jesus comes to love his father (who, of course, we found out, is in the last stages of cancer) and works hard to please him, despite his rough exterior. We even cannot help but to tear up a bit when, after yet another drinking bout, the pugilist becomes hospitalized—although I must confess, I couldn’t wait for him to die so that Jesus might return for his big comeback as a real star drag queen just dying to let all hang out.
Fortunately the movie awards us with that last treat. But all along it has also been awarding us the beautiful performances of its actors and setting, which leave the Irish director and writer a bit in the dust.
But then, these Irish folk didn’t take the film through the dirt and carnality that others might have. For all the sexual activity going on, Viva’s heart is as pure as John Waters’ Hairspray and Pecker. The lip-synching broads really do sing their hearts out, and we have no choice but to totally love them—even though we all know, as Cindy declares, “it’s just an illusion.” So too is Havana; maybe even more so if it becomes a new tourist destination.