the evil you do
by Douglas Messerli

While Pier Paolo Pasolini’s Mamma Roma was awarded the International Critic’s Prize at the Venice Film Festival and received Italy’s Silver Ribbon, the 1962 film was not well-received, with many critics criticizing Anna Magnani’s over-the-top performance, and some audiences finding the work immoral.
Seeing it the other day, however, almost 55 years after it was made, I found it just as Gary Indiana describes it in an essay accompanying the Criterion release, “among Pasolini’s most audaciously shaped and satisfying movies.” Over the years, it now appears less of a neorealist “slice of life” as it is a sort of contradictory statement about the relationship of the Italian postwar world, where the rich and pious are represented as frauds, while the poor and peasant aspirants to the bourgeoisie, like Mamma Roma (Anna Magnani), are portrayed as Christian saints. 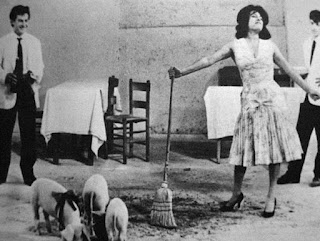 Pasolini, as we know, was an agnostic Marxist, but still carried with him, in nearly all of his films, the Christian ideology, which pushed his films into different directions than almost any other filmmaker of his day. If his early work appears to be grounded in realism, it is in fact related far more to the theatrical tradition, which is why Magnani is so good in this role. While hardly anyone has much to say in the Rome of Pasolini’s imagination (Mamma’s son, Ettore [Ettore Garofolo] being almost a mute, and the others figures mumbling) Mamma is constantly shouting at the top of her lungs, lecturing the various passersby in one long ongoing speech as if everyone in the world was her audience. She truly is the “mother of us all,” using language itself to alter the society in which she is entrapped.
Even as the film begins, at a wedding party where her former pimp, Carmine (Franco Citti) is marrying the young Bruna, Mamma steals the show by bringing three dressed-up pigs to the affair, symbolizing not only her own feelings about Carmine, but joyfully celebrating the event. She is now free, is planning a new life, one which will take her abandoned son Ettore from the country back to Rome where she plans to move into a suburban neighborhood and run a vegetable stall to better provide for her him.
The problem, inevitably, is that the past will not let go of her, as Carmine shows up
again a few days later, his marriage having failed, to demand that she return to the streets. And although she is determined to help Ettore find a job, her methods are those of a street person, as she manipulates a local restaurant owner by hooking him up with one of her street-walking friends. To shift Ettore's interests away from a local woman with a child, she arranges the same whore, Baincofiore (Luisa Loiano), to make love to her son.


Although she clearly desires, in short, to live a reformed life of the middle-class, her earthly laugh and booming voice will always mark her as a woman of the streets and the peasant class, which put her in conflict with her insipid aspirations. And it is precisely that past that will also be the undoing of her son.
Even Mamma becomes aware of how the past effects the present and the future, telling Baincofiore “The evil you do is like a highway the innocent have to walk down.”
Her “innocent,” of course, is her son. Throughout the film Pasolini shows Ettore as a kind shuffling, lumbering beast, despite his suit and tie, who aimlessly sleepwalks through a life through which Mamma forcefully strides. An attempt to teach him to dance the tango (one of the most beautiful scenes of the film) results in her landing, as she puts it, on her butt. Ettore cannot succeed, even in his job at the restaurant, because he is a brute with no ability to think. Yet, it is these very brutes of peasant stock, whom the director most desires and loves; and it was just such a figure, a ragazzi picked up at a local bar,

who eventually killed him. Pasolini clearly thought of these born-losers as being as close to saintly as any humans on earth. If they are fools, they are fools the way Erasmus spoke of Christ in The Praise of Folly. Throughout the film, Ettore and his friends, mostly petty thieves, are represented in poses and momentary tableau vivant as figures out of religious and classical art.
As internet film critic Jim Clark has observed, many of the images of Ettore are alarmingly reminiscent of Caravaggio paintings, particularly his Bacchus and Boy Bitten by a Lizard; the last scenes of Ettore, imprisoned on a punishment bed (letto di contenzione), clearly references to the death of Christ on a kind of horizontal cross.
And throughout Mamma Roma, despite her sufferings and inner despair, it is Mamma who remains genuinely funny in a world of general bleakness, and it is only she who almost endlessly laughs.
If these scenes can be tied to neorealism I lack a perspective on the everyday. No, Mamma Roma’s world is a highly artificed one, a world of make believe which protects her, for the most part, from the terrible pain of those with whom she lives. Pasolini upended Rossellini’s Open City by using the same actress in a very different way. If she is a bit manic, one might argue that she is the only character in Pasolini’s film who truly seems alive.