murder for sport
by Douglas Messerli

Richard Murphy (screenplay, based on the novel by Meyer Levin), Richard Fleischer (director) Compulsion / 1959
Compulsion, directed by Richard Fleischer, is certainly not a great film. In its attention to the actual events surrounding Leopold’s and Loeb’s 1924 murder of an innocent 14 year-old, Bobby Franks, Fleischer’s film focuses far more on the psychological problems of two villains than on the actual series of events, except for an early scene when, just for the fun of it, they rob a fraternity house and attempt to rundown a drunk on their way home. But the rest of the film demonstrates their emotional immaturities through their relationships with their siblings and parents, their fellow students and teachers. Leopold’s attempt to rape a fellow woman student ends in failure. And we never see the actual murder, only its aftermath. 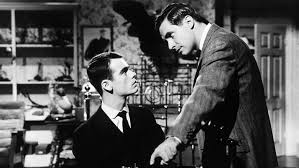 Unlike Alfred Hitchcock’s Rope of a decade earlier—a far less faithful rendition of events—in which the homosexuality of the figures is made quite apparent, their ideas are discussed a greater length, and Loeb’s macabre toying with discovery becomes the focus of the film—Fleischer’s version seems at times to slink around the corners of Judd Steiner’s (intensely acted by Dean Stockwell) and Artie Strauss’ (audaciously performed by Bradford Dillman) relationship, presenting the pair more patently as two rich kids with brilliant minds but with juvenile patterns of behavior. Their murder of the boy is almost characterized as a lurid prank.
In Rope the discovery of their ghastly deed is almost an accident. That their former professor, played by James Stewart, simply finds their behavior as suspicious and the absence of a guest as odd and, accordingly, returns to their apartment to challenge them, has always seemed to me as highly unbelievable, almost as if it is an tacked-on ending. In some senses, he hardly care; we know that they did it, and are far more interested in seeing how the two attempt to get away with their deed. 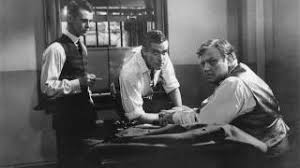 Compulsion, on the other hand, is almost entirely driven by the Perry Mason-like search for evidence by District Attoney Harold Horn (E. G. Marshall). The glasses, which will ultimately  track him directly to Steiner, at times seem to get lost as Strauss, in open collaboration with the police, steers them in several false directions, which includes digging up the street in front of his family’s grand house. And it is only when the cub reporter, Sid Brooks (Martin Milner) and Horn enter the scene that Fleischer’s movie begins to come to life. Horn’s subtle manipulation of entrapment of the boys is fascinating to watch
But it is the rather didactic end, wherein the lawyer Jonathan Wilk (Orson Welles), based on some of the 2-day long summary by the real Leopold-Loeb lawyer, Clarence Darrow, that the film comes something truly worthy of watching. As film lecturer Kevin Jack Hagopian describes it:

Orson Welles’ portrayal of the Darrow surrogate
Jonathan Wilk borrows the spirit (and some of the
very phrases) of Darrow’s epic closing, and
strains it through Welles’ own towering style. His
final speech to the judge, at fifteen minutes in length,
is one of the longest by a single character in the
American cinema. Welles wisely underplays Wilk,
making him world-weary and inward-turning,
banking the fires Darrow himself had let roar up.
Wilk is the calm center of a film that seethes with
the unspoken fears of a postwar era that had already
known mad bombers, lipstick killers, spree murderers,
and silent stranglers, each wearing the winning smile
of the boy next door.
Pleading guilty for the boys, Darrow, believing he could not find 12 men or women in all of Chicago—after the press had stirred up such hatred for the young duo that they literally stood in the shadow of the gallows— who would not want to hang the young murderers, demanded the case be heard by a single judge, and after the State rested its case, argued quite brilliantly against the death penalty, particularly given their ages and brilliance, despite their sociopathic immaturity. 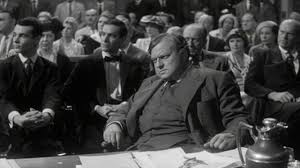 The judge gave them life imprisonment, and for his good actions throughout his long term, in 1958—in part because of this film and testimony by men like Erle Stanley Gardner and Carl Sandburg—Leopold was freed, although he attempted, unsuccessfully, to sue the film’s makers for their unflattering portrayal of him. Loeb, not such a model prisoner, was killed in a prison knife-fight in 1936.