the good son
by Douglas Messerli
Tadao Ikeda and Masao Arata (screenplay, based on a story by James Maki [Yasujirō Ozu]), Yasujirō Ozu (director) 一人息子 (Hitori musuko) (The Only Son) / 1936

The first image of Yasujirō Ozu’s 1936 talkie, The Only Son, is a sentence, a kind of maxim: “Life’s tragedy begins with the bond between parent and child,” which could, in fact, serve as a prelude to nearly all of this great filmmaker’s works.
The next “scene” shows us the hard-working widow, Tsune Nonomiya (Chōko Iida) at work in a silk production factory in the rural town of Shinshū in 1923. When she returns home to her son, Ryōsuke (Masao Hayama), apparently near the end of his elementary school studies, he reports to her that many of his peers are going on to Middle School, and it is clear that he would like to join them, while recognizing that she is too poor to pay for his expenses. He also perceives that his future in the rural outpost in which he lives is going to be bleak. 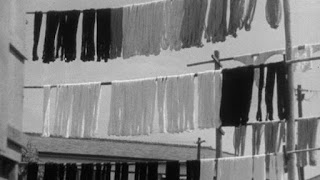 Ryōsuke’s teacher Ōkubo (Chishū Ryū) also stops by the house, revealing his happiness that, as Ryōsuke has evidently told him, he will be going to Middle School in Tokyo; he, too, is soon planning to return to Tokyo. It is important for the child’s future, he argues, that the boy have further education.
When Ōkubo leaves, Ryōsuke is punished for his lie, but his mother realizes the truth of the teacher’s words, and is pleased by her son’s desire to continue his education. And she soon relents, saying she will simply find a way to make it happen.
The film suddenly shifts to Toyko, thirteen years later, to a scrappy suburb of the city, where Ryōsuke works as a night-school teacher, hardly making enough to feed his wife and new baby. After all these years, Tsune has saved up enough money to visit him, and when she arrives, you can see her disappointment about the location of her son’s modest home, and her surprise and hurt that he has not told her that he is married and has a baby. But, like the visiting parents in Ozu’s masterful Tokyo Story, she swallows her pain, and expresses her joy in finding a new daughter-in-law and grandson.


Ryōsuke (now played by Himori Shin’ichi) quickly borrows money from friends in order to buy dinner and a pillow for his mother, while knowing that he will have a difficult time paying it back and realizing that it is several days from his paycheck.
In order to entertain his mother, he takes her to a movie (a talkie), the first she has ever seen, and together they visit several public shrines. But she, tired from activities, seems disinterested in the film, and quickly falls asleep. The next day, they together visit his former teacher, now running a tonkatsu restaurant, his own dreams of becoming a professor also clearly having been dashed.
That evening, with little money left, Ryōsuke and his wife introduce the older woman to the Chinese-style Ramen noodles which the poor eat.


While touring with her in the neighborhood the next morning, he sits in a field with her, admitting his own sense of disappointment and defeat. It is very difficult, he explains, to survive in such a large urban environment. For the first time, during her visit, she outwardly chides him, angry for his being such a defeatist (while not openly expressing what we know, that part of her anger surely is that she has herself given up so much for her son). She admits that she has been forced to sell their home, and has for years been living in a factory tenement.
Out of money, the married couple try to imagine how they might continue to entertain Tsune; but  Ryōsuke’s wife reveals that they have some more money since she has just sold her kimono, and the family plans to spend the day together enjoying city life.
In their neighborhood, however, a young boy playing under and around a horse, is kicked and must have immediate medical attention. The family cancels their plans and help to rush the neighbor’s boy to the hospital. The boy will survive, but will need weeks of attention. O-Tusne observes her son quietly handing over the envelope of money Ryōsuke has planned to use for their outing to the boy’s father to help with the child’s medical bills. She later tells him what she has seen and praises his kind act.
Now, having seen, so to speak, “how things are,” she is ready to return to her village and job. Before she leaves, Ryōsuke promises her that he will find a way to return to school in order to find a better job as a teacher.
And back in Shinshū we see her gossiping with a friend about how proud she is of her successful son, so pleased with him that she can now die happy.


Yet Ozu’s last shot of her, as we see her sitting alone during a break, we see her gazing sadly into the future. And we can only wonder whether Ryōsuke will be able to keep his promise or ever find a better job.
Many of Ozu’s works are bittersweet, just as the film I mentioned earlier, Tokyo Story. But The Only Son, made when Ozu returned to film-making after to the Japanese-Sino War, seems particularly bitter. For all the “good” people of this film cannot find the lives that they deserve, and suffer, so it seems, for all the others who somehow found a way to get ahead. If nothing else, the unjust society in which they find themselves is unable to reward all their hard work. It now sounds so familiar.