sacrifice and blame
by Douglas Messerli

Yasujirō Ozu and Ryosuke Saito (screenplay), Yasujirō Ozu (director) 風の中の牝鶏 Kaze no naka no mendori (A Hen in the Wind) / 1948

Yasujirō Ozu’s A Hen in the Wind is hardly his most appealing work. Not only is the film—about a war-time wife, Tokiko (Kinuyo Tanaka) who, in order to pay for her son’s medical bills, becomes a 1-time prostitute—melodramatically conceived, but its patriarchal attitudes are nearly unbearable. 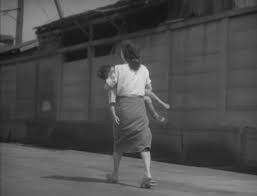 We all know that when Ozu was repatriated from the war, he turned to subjects primarily dealing with family life. But generally the tensions between parents and children are quite fairly represented. Here the tensions are quite one-sided, as the returning husband, Shuichi (Shūji Sano) becomes furious when his wife confesses her behavior, eventually violently throwing down the stairs.
She survives, and he ultimately forgives her, but in his determination that they should never speak about it again, he is still blaming her for her own sacrifices. Even though he has discovered that she visited the brothel only once—and we know what he doesn’t, that her customer could not even get an erection—she is still blamed for the event.


Moreover Ozu does not even permit his character to defend herself. At no time does Tokiko report just how difficult it was to raise a young son alone, or express the fact that she often went hungry to feed Shoichi (Hohi Aoki), that she had attempted and failed to sell her last kimono,  that she often carried the sick child home on her back, or that without immediate money she would be unable to put him in the hospital to be cured. Rather, the director has her endure her husband’s charges in quietude, almost as if she deserves them. And given the family dynamics, it is clear that she believes he is justified.
Critic Joan Mellen felt that this violent moment showed that Ozu “brilliantly and honestly confronted the post-war moment,” showing how Japan—like the heroine—had become prostituted to the sleazy values of the Occupation.” Yet for me he seems the director blames those who stayed behind with few alternatives, instead of t  he young warriors who brutally went off to war. If these represent his conservative family values, I certainly wouldn’t want to share his family life. But then Ozu never married or had children.
The work kept reminding me of how Nora, in Ibsen’s A Doll’s House, was attacked for having made sacrifices to save her husband’s Torvald’s life.
But Ozu gives poor Tokiko, who unwillingly sacrificed her own body to save her son’s life, no choice of even leaving; she is more trapped in their poverty-stricken homelife if the mid-20th century than even was in the previous century’s norms. But then, it is also apparent that Shuichi would never be able to care for their son, and that Tokiko’s only choice, if she were to leave, would be to continue a life of prostitution, becoming more of a Mizoguchi figure than an Ozu one.
Speaking of A Hen in the Wind, Ozu himself described it as “a bad failure.”