Despite the stunning beauty of Zhang’s Raise the Red Lantern, as well as the film’s strongly feminist themes, and the excellent acting of all those involved, there is something missing here that fails to make it the great cinema that it aspires to be.
Perhaps its simple story of patriarchal power and how that system destroys not only the women under it, but the humanity of all involved, is just too easily graspable after the first few scenes, and the director lavishes too much time on repeating it again and again. Or maybe it’s simply the hot-house melodramatics of the piece that make it all so flawed. 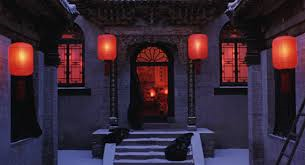 No one in this world it seems can behave even slightly decently: Master Chen (Ma Jingwu), raising the red lanterns like a giant cock crowing about his choice each night of his hen-like concubines, is so completely trapped in past traditions that he appears unable to do anything original; Yuru (Jin Shuyan), the first wife, has almost utterly abandoned living;  Zhuoyun (Cao Cuifen) is a liar determined to destroy all the other concubines; Meishan (He Caifei), the third wife is a spoiled manipulator who cheats on her husband with Doctor Gao; and even the innocent newcomer, Songlian (Gong Li), is soon enveloped in the survival ethics of this society, lying about her pregnancy, and, in her revelation of Meishan’s affair with Gao, causing her murder. She is also responsible for her servant, Yan’er’s punishment and death. So, in the end, it is difficult to even find a character to side with.


True, Songlian, who has been forced into this loveless world by poverty and her stepmother, at 19 is simply too young to properly deal with such situations. But she is even harsher with her servant than the others, and is too unimaginative, it appears, to find other ways to distract herself. At least Meishan has her music, Yuru her resolve, Zhuoyun her scorpion-like hatred. Even Yan’er has her dreams, secretly hoarding used red lanterns in her room to pretend she is also a concubine.
Perhaps only Master Chen’s son, Feipu, who plays the flute, has any integrity, but his role is too small to give any evidence of this, and we can only imagine that he has been trained to carry on the Chen family traditions.
Although Zhang has denied it, it is apparent that the small world  depicted here is very much like China’s government under Mao, which in its frozen relations of the individual, government and laws, made all actions meaningless; yet that fact, given the trajectory of the story, seems dramatically uninteresting after you perceive it. And it’s difficult, in the end, not to side with Hal Hinson’s observation in The Washington Post that “the story never amounts to much more than a rather tepid Chinese rendition of The Women.”—but without that movie’s humor, I’d add.
Dozens of other critics, however, highly lauded it, and the movie continues to be seen by many as one of the best films of the 1990s—which reveals, perhaps, that good sets (the film was shot on the Qiao Family Compound in northern China), beautiful costumes, and good actors often matter more in such epic-like storytelling than more complex and introspective narrative. It’s simply difficult for me to sit back and thoroughly enjoy a work, however, made up only of morally reprehensible figures. It’s said that this film alone caused a huge rise in tourist visits to China; but if this work is truly what China is like, I’ll stay home.