an unholy trio
by Douglas Messerli

Nagisa Oshima and Tamura Tsutoma (writers), Nagisa Oshima (director) 少年 Shōnen (Boy) / 1969
Nagisa Oshima’s 1969 film Boy was based on a real story from the newspapers about a family that used one of their young sons, called “boy” throughout the film, to scam unsuspecting drivers by pretending they have hit him; after threatening to go to the police, the father and mother generally receive “off the record” payments from these frightened individuals. 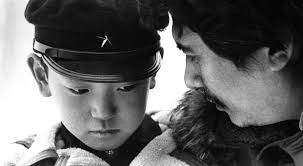 The father (Fumio Watanabe), a former Japanese veteran, claims that he cannot work, and, accordingly, needs to stage these scams in order to survive. But his second wife (Akiko Koyama), pregnant with what would be their third child, is determined not to get an abortion, and dreams of saving enough money to begin living a normal life.


The “boy” (Tetsuo Abe), moreover, because of his sudden falls into near accidents, is beginning to suffer real bone damage. At one point we observe his father putting a needle into his arm in order to create a convincing black bruise. He and his little brother are, he imagines, living in a world filled with dangerous aliens, which he is determined to vanquish, while both his health and innocence are simultaneously being taken away by the father’s cruelty and his mother’s passivity.
Fearful of being discovered, the family keeps on the move, with the father finally living separately, possibly having affairs with other women and returning only for further scams and abuse of his wife.
Several times the boy attempts to escape to their original home city, but doesn’t have enough money to make the entire trip, and each time returns to dysfunctional family unit.


After Oshima’s Brechtian films such as Death by Hanging and Violence at Noon, Boy seemed to some critics to be a tamer move into documentary territory. But the director’s use of red lenses to symbolize the boy’s connection with the mother, his switch back and forth from black-and-white to full color, and his almost dispassionate objectivity of the suffering family, actually transforms this work into a more experimental consideration of social conditions in Japanese society and, as in many of Oshima’s films, focuses on that culture’s effects of World War II.


Despite his seeming objectivity, moreover, Oshima helps us to sympathize with his young hero, by framing him at the edges of images, showing him wandering in lonely dreaminess, and in one case, observes him being attacked by other children, his new yellow hat being dragged into the mud. Only a couple of times do tears actually well up into his eyes.
And when the family is finally tracked down by the police and a doctor is called for the young boy’s wounds, who reports he may have to amputee the child, the boy fatalistically cries out “Go ahead, cut 'em off!” Clearly the aliens of his world have won the battle for his young life.