by the neck
by Douglas Messerli

Jean Renoir (writer, based on the novel by Georges de La Fouchardière), Jean Renoir (director) La Chienne (translates as “The Bitch,” but English title not used) / 1931, US 1976

Poor dimwitted Maurice Legrand (Michel Simon), who has worked many years as a bookkeeper in a hosiery company. Legrand is a slow thinker, who seldom gets a joke, is hen-pecked by his disagreeable wife, and is seen as an utter fool by his fellow employees. Instead of joining his male compatriots after dinner on a night on the town, Legrand obediently returns home—but still gets into trouble when comes across a streetwalker, Lulu Pelletier (Janie  Marèse) and her abusive pimp, Dédé Jauguin (Georges Flamant) who appears to be beating her as he passes. Rushing to her defense, Legrand strikes Dédé, accompies Lulu to her apartment, and falls madly in love. 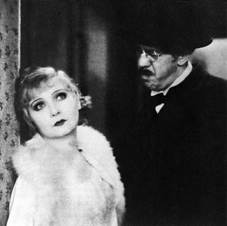 Returning home, he is again berated by his wife and ordered to “get rid” of his paintings, the only true joy he has left. What’s man to do? Believing that Lulu is a nice girl, he puts her up into a small apartment, buys furniture on the installment, and covers her walls with his fanciful art.
The worst of it is that Lulu still loves Dédé, and the two of them plot to get even more money out of Legrand, eventually selling Legrand’s paintings to a wealthy art dealer for vast sums of money.
Renoir’s beautifully filmed melodrama plays out somewhat like a romantic opera, with Legrand mooning over Lulu, as Lulu, refusing him even sex, tries to hold on to her despicable lover, Dédé, who pockets most of the cash while offering as little affection as possible to the woman behind his increasing wealth.


Fortunately, the director also adds in a great many comic moments (a scene in which Madame Legrand is seen reading the novel on which the movie is based in bed; the sudden  reappearance of her presumed-dead former husband, whose photographic image dominates the Legrand apartment; and Legrand’s taking advantage of the situation to get out of his loveless marriage, are just a few of the film’s comic high points).
Yet, we know this work must end with a tragic note, particularly when Legrand eventually discovers—as the narrative requires—the treachery of Lulu and Dédé. But even here Renoir is careful not to let the melodrama get out of hand, and shows us Lulu after her throat has been slit, with Legrand beside her, in shock over his act. A small group of street performers gather with a crowd outside her apartment building, obscuring Legrand’s departure.
Soon after, Dédé, loud and ostentatious as always, drives up in the new car he has bought with the sale of Legrand’s paintings, demanding that the crowd move out of his way, thus alerting them all to his presence. He rushes in to his Lulu without even speaking to the concierge, who intended to ask him to bring Lulu her mail. When she discovers the body, soon  after he leaves, the only presumption can be that Dédé is the murderer; and so the court declares, sending him to his death.
Again, poor Legrand, destroyed by his guilt and with nowhere else to go, becomes a tramp, accidentally meeting up again with his wife’s former husband, who has also moved to the streets. By the end of this film, Simon is already dressed for his very next role, Boudu Saved from Drowning.


La Chienne was only Renoir’s second sound feature, but already he demonstrates here the nuance and attention to detail that all of his great films demonstrate. Unlike other European directors, Renoir filmed the dialogue live, bringing with it all the ambient sounds of bells, whistles, nearby singing, and Parisian street life. In the very first scene where Legrand and his colleagues are dining out, we catch a glimpse out the window of the famed Moulin Rouge, telling us that we are in Montmartre. At another moment, while a young girl in a nearby apartment plays the piano, we watch Legrand shaving, as he takes a moment out to ogle the young player, hinting at the connection between desire and a stroke of the neck, reiterated in another early scene in which the actor has his long fingers draped Lulu’s shoulder, as if he were about to choke his would be lover.
A brief puppet show, using the stock figures of good and evil, begins the film, each of the three figures telling their own version of the tale we are about to see, a bit like Kurosawa’s later Roshoman, the Legrand puppet arguing that there is no moral to this tale. The film ends with another ironic image, the self-portrait which Legrand has painted being carted away by a wealthy collector as the artist reaches for a few coins tossed his way.
To get realistic performances out of his actors, Renoir reportedly encouraged an offscreen romance between Marèse and Flamant, which infuriated Simon, who himself had fallen in love with the actress. After the film was completed, Flamant was involved in a car accident that killed his passenger, the Lulu of this film.
Posted by greenintegerblog at 8:28 AM