what is love?
by Douglas Messerli

The hero of Pedro Almodóvar’s 1990 film Tie Me Up! Tie Me Down!, Ricky (Antonio Banderas) might be described—much like Alan Randolph’s Mikey (Keith Carradine) in his 1984 work, Choose Me—as a crazy Casanova. Both begin the films by being released from insane asylums, and both focus on beautiful but mentally unstable women as someone they immediately determine to bed and marry. Both of these films, moreover, border on edgy comedy and a genre close to a thriller, wherein the women are both put into danger at the very same moment that they are liberated. 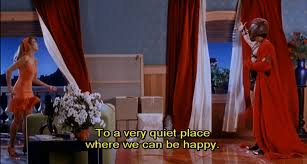 Aspiring actress Marina Osorio (Victoria Abril) is very much on the “verge of a nervous breakdown” (the title of another of Almodóvar films), trying hard to shed her previous life of porno acting and drug addiction by landing a role in a kind of third rate horror film being directed by has-been filmmaker Máximo Espejo (Francisco Rabal). Although now wheelchair-bound, Espejo has the hots for Marina, who was evidently introduced to him by her sister, Lola (Loles León). Planning for a celebration after the last shoot of the film, the two sisters are asked to perform a sexy dance routine.


What she doesn’t know is that she is already being stalked by Ricky, and within a few hours he will have entered her apartment, forced her into bed, and, soon after, tied her up with cord and put masking tape across her mouth, after striking her for screaming. So far, it certainly doesn’t sound like the makings of a comedy. That is, until we find that his real motive in abducting her is not rape but marriage and a future family. The contradictions between Ricky’s bourgeois intentions and his brutal behavior, however, is what makes us laugh.
And soon after, when he gently handcuffs her to accompany Marina on a visit to her doctor (Maria Barranco)—she has a toothache which has been exacerbated by Ricky’s slug—we perceive a sort of loving vulnerability to this predator that turns his violent actions against the woman to something else. Even the doctor approves of what appears to be Marina’s new “boyfriend,” particularly when he suggests that the doctor should not encourage Marina to take more drugs.
In the next few scenes, moreover, he carefully purchases a nicer brand of cord and masking tape that doesn’t hurt upon its removal. He is even willing to hook up with a street vendor in search of the drug prescribed by the doctor for Marina, putting his own life in danger and which later results in his being beaten up.
Like a gallant he offers his would-be lover an apartment across the hall which has been temporarily vacated by a film-making friend. And when the couple finally does have sex, he is apparently a wonderful life. That scene, in fact, originally received an X-rating in the US, occasioning a suit which ended that rating in the American film industry.


Some commentators have compared Marina’s growing love for her abductor as being similar to the Stockholm syndrome, wherein victims often end up siding with their predators. But I think to characterize Marina’s growing love for him in that way would be to miss the awful fact: despite the methods he has used to convince her of his worthiness, he does proffer the confused young woman a road to a better life. And by film’s end, we are convinced that he may actually reform, getting a better job and becoming a model husband.


Of course, what the director does not really admit is that Ricky will also probably be a jealous husband and determined to allow her any career ambitions. It’s even suggested, early on, that it is precisely those ambitions which have left her in the neurotic condition in which we first find her. But to be fair too Almodóvar, almost all of his characters, male and female, find themselves in sexual situations which delimit their possibilities and force them into compromise. And Marina’s sister, who works as Espejo’s assistant, seems to have managed quite nicely balancing her career and love-life. Perhaps the very fact that Marina can now credibly act will help the couple to maintain a financially successful life, besides Lola promises to help get him a job; it is clear that, even if he is crazy, Ricky is crazy about Marina. And marriage, as Rudolph suggests at the end of Choose Me, is always a gamble.
No, I would argue, Marina falls in love with Ricky not because she is a victim, but because her predator, himself, is the deluded victim of cupid’s arrow. Ricky is the truly helpless one, willing to battle for her love even if he must fight that out on her very skin. I imagine many wife-beaters justify their acts in that manner; but in Almodóvar’s world, love is always a strange and violent thing, filled with breakdowns, drugs, transformations, revenge, and, yes, even a kind of joyful madness. Certainly, it is never pure or simple.