let’s do it
by Douglas Messerli

Before Saturday Night Live’s “two wild and crazy guys,” the Czech emigrant Festrunk Brothers, Czech director Věra Chytilová wrote of two wild and crazy gals in her film Daisies. The “daisies,” in this case, who insist they are sisters, but may, in fact, be only close friends, are  both named Marie, who observing that the world has become “spoiled” and meaningless, with the Cole Porter logic of “Let’s Do It,” determine to become “spoiled” themselves. 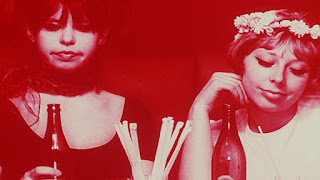 What follows is 70-some minutes of Dada-like events, wherein, in full color, sepia, and several other colors, the Maries deconstruct themselves and the patriarchal society which has attempted turn them into objects (early on, one of the Maries declares that she has become merely a “doll”).


Their first act is to frolic across a field with a single tree brimming with apples, which suggests that they have suddenly become Eve-like figures, tempting the men around them so that the entire society might fall. And, indeed, throughout this amazing mash-up of cinema technique they are seen dining with older, married men who must end up paying for the huge meals they together consume.


Gluttony, indeed, seems to be one major ways in this film they become “spoiled,” almost as if they attempting not just to trick their victims—leaving them generally in the lurch as the males with whom they dine run to catch their trains back to their wives—but to consume, to literally eat up the society itself. At one point, we see the feminist logic to these actions as they slice up various phallic-shaped food stuffs, including bananas, croissants, and sausages (grilled, a few moments earlier in a fire that nearly burned up their room).


But “spoiled,” in this case, also includes testing the limits of their own relationship—  cutting away each other’s body parts as if they were paper dolls and/or store window mannequins—and of close women friends such as an elderly bathroom attendant who attempts to keep them near her by serving coffee, and from whom they steal a few coins.
What is clear is that both the characters and director are testing the limits of their own transgressions, and together they inventively imagine ways to challenge the system in which they are trapped. While the woman are observed as constantly seeking new ways to “spoil” themselves, so does Chytilová endlessly attempt to breakdown the limitations of filmmaking, shifting not only dozens of different lenses and other cinematic devices, but ambitiously moving images from the realist to the abstract. And several moments the film looks more like an early silent film or even a cartoon reel rather than a film feature of the late 1960s.


Such willful destruction, obviously, can end only one way. The two Marys break into a Communist party banquet, playfully eating up nearly all the food before the, presumably,  mostly male diners have even entered the room, dancing across the long banquet table which ends in a farcical food fight before the two, swinging, from a glass chandelier fall to their deaths by, strangely enough, drowning.
A narrator suggests that, given a chance, the two might have wanted to make amends, but when we see the Maries attempting to clear up their mess and put the impossibly broken plates and silverware back in place, we know that they would never have been able to “fix it up.”
Chytilová’s work, in turn, was banned for “depicting the wanton” (the censors claimed that the director had used up too much food in the filming), and director herself was banned for several years from filmmaking.
Today, we recognize this droll movie not only as a brilliant feminist work, but as one of the most innovative works of the Czech New Wave.