the uninhabited garden
by Douglas Messerli

As World War II continued, Mussolini liked to call Italian Jews “his” Jews, and was not always pleased with Germany’s demand that they be sent to the camps; but early on, the Italian dictator very much emulated Hitler, sending thousands to camps and disenfranchising them from Italian society in general, as Vittorio de Sica’s film The Garden of the Finzi-Continis, based on the autobiographical work by Giorgio Bassani, reveals.
Yet de Sica’s work, which ends with the mass arrestment of Ferrara Jews, does not truly focus on the Holocaust as much as it does on the sad passivity of that Jewish community, symbolized by the proud aristocratic Finzi-Continis, who hide away in a walled Edenic castle as if still living in some 19th century fantasy world. 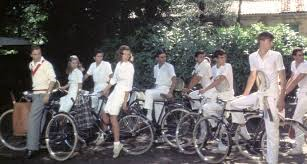 De Sica’s film begins with a kind of mass intrusion of this separate entity as a group of mostly Jewish youths, banned from the city’s tennis clubs, gather to  play in a kind of private tennis tournament, hosted by the young Finzi-Continis son, Alberto (Helmut Berger) and his sister, Micòl (Dominique Sanda). Most of the participants have never even been inside of the Finzi-Continis estate, and are in awe of the walled garden and home. But one, Giorgio (Lino Capollicchio) has for years regularly “jumped” that wall to join Micòl with whom he is in love.


Although it first appears that Micòl is also in love with him, gradually over the space of the film we sense her reserve and, finally, rejection, as de Sica makes  it clear that she is actually having an affair with Alberto’s friend Bruno Malnate (Fabio Testi). Bassani’s work does not make that relationship evident, and even the film director seems not quite what to make of her change of heart, suggesting early on that Malnate may be having a gay relationship with Alberto, and hinting that Micòl herself has a somewhat incestuous relationship with her brother.


Certainly that might explain her attraction to Malnate, but the visual evidence that she is having an affair with him seems to contradict the other elements of de Sica’s film and, if nothing else, takes away from the Finzi-Continis’ mysterious “otherness.”
The relationship between Giorgio and his middle class family oddly parallels the Finzi-Continis’ lack of awareness of the world around them, Giorgio arguing with his father, who believes the restrictions put upon them are livable and limited, without realizing how much his son has already lost his freedom. Even visiting the local library is forbidden, and Jews are no longer able to hire domestic help. Yet Giorgio’s father can hardly believe that in their hauteur, that the Finzi-Continis are actually Jews. In short, he too is blind to the truth of things.


I mention all of this because, despite the beauty of de Sica’s film, the story it tells seems tame and confused, as if not only the work’s characters were blind to reality, but the director does not clearly see the truth as well—or, at the very least, does not quite know where to take his narrative. And, ultimately, that alters the film from what might be seen as a kind of tragic vision to a merely “sad” one, transforming it into a kind of Jewish version of The Bicycle Thief, a pretty-to-look at, but slightly maudlin story.
As film critic David Thompson suggests de Sica is he is a man of impeccable taste, but he does not truly feel for his characters, almost painting them as figures for whom his audience should care for but that he cannot quite bring himself to.
It is that standing back and deep commitment to his artistry that helped, surely to kill Italian neorealism, and made de Sica’s most thoughtful films less interesting than simply lovely to look at.


In this and others of his films it is almost as if the figures in his landscapes cannot truly ever reach out to feel for one another. They are all linked to one another by a spiraling destructive force that does not quite allow them to truly interconnect. Alberto, it appears, is too frail to even have a true love relationship with Malnate, Micòl is destined, as she herself insists, to become a loveless old maid like the subject of her thesis, Emily Dickinson (who, in fact, was far more full of passion than almost anyone in the “garden” in which the Finzi-Continis live). Giorgio’s family can neither imagine the lives of the aristocrats nor the Fascists.
The lovely youths who enter the garden in the first scene never return, Malnate as well, who, inducted into the military, dies in war. Only Giorgio seems able to transverse these worlds, but even he seems to derive no joy from it and is misled. He is invited to use the great Finzi-Continis library, but finds hardly anyone willing to engage him, the father only vaguely promising him to show the original manuscripts on the very subject of his poetic thesis. And, after visiting his brother in Grenoble, France, Giorgio does not seem to comprehend that it is not safe to return to Ferrara. His youthful arguments with his father seem almost complacent. And his final escape—after his own parents and all the surviving Finzi-Continis are arrested—is mentioned almost as an afterthought.
De Sica’s film is truly a handsome thing to behold, and it justifiably won several awards including the Academy Award for Best Foreign Language Film and the Golden Bear at the Berlin International Film Festival. Its colors are splendiferous, its characters nearly all beautiful or picaresque. It’s themes, isolation and self-delusion, remind one at times of the faded world of the Belle Époque, almost like something out of Visconti’s The Leopard. But Visconti’s work is a far more solid one, while de Sica’s seems pallid and frail, a butterfly that cannot truly express the horror behind the story that’s truly being told. And, in the end, it’s almost as if its “garden” had never been inhabited.