city without borders
by Douglas Messerli

Although it might have made more sense to the English ear to title this film Why Alexandria? I believe you have to read the title of Egyptian director Youssef Chahine’s 1979 film not as a true question, but as a kind of lover’s plea, something like “Oh my dear beauty, why are you doing all of these things?” The film itself, in fact, seems to be a kind of search for answers to that very plea. 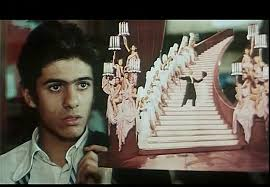 The New York Times Critic Vincent Canby attacked this film as “a daisy-chain of events,” and argued that “Mr. Chahine directs this material with all of the authority and humor of the driver of a runaway stagecoach,” suggesting that this reviewer’s mind was simply not quick enough to comprehend the various dozens of off-shoots of the central story concerning Yehia (clearly Chahine’s younger self) which are not intended to be complete or immersive stories, but rather serve as an emblematic kaleidoscope of Alexandrian life.
Indeed, the director does combine numerous kinds of filmmaking: historical documentary footage is conjoined with panoramic views of the port, Hollywood clips of everything from the MGM lion and Esther Williams to a tap-dancing Eleanor Powell finale, family home movies, scenes from a downstairs cabaret, clips of lovers on the run, etc—all of which do sometimes result in a kind of dizzying rush. But none of these are truly developed, serving rather as a kind of diorama of individual possibilities.
Just as that city is made up of Christians, Muslims, Jews, and people from various nationalities, so too is Chahine’s film representative of the inter-relationships of all aspects of the city’s life. A leftist Muslin, Ibrahim (Ahmed Zaki) is in love with the Jewish Sarah (Naglaa Fathy), underground figures conspire to murder Churchill while others cry out in support of the British soldier roaming their streets to protect them from the approaching Germans. Yet others predict the upcoming Palestinian catastrophe.
Yehia’s wealthy uncle attempts to buy the love of a New Zealand officer, but falls instead for a very young and confused British private about to go into battle. Yehia’s Victoria school colleagues are in a desperate search for women who they intend to fuck while crammed with their buddies inside a small car. And Yehia, very much at the center of all these different desires and identities, survives by imagining himself living in American films. The year, after all, is 1942, and entire world is whirling into a kind of mass hysteria, a vision which Chahine thoroughly captures through his mash-up of these various cinematic genres.
The fact that Alexandria…What? manages between all its pushes and pulls, the nightly bombings and the daily barrage of competing actions to show such deep affection for the city’s citizens and events is something of a marvel.
Yes, Yehia’s middle-class family shouts at one another through every game of cards, but his beautiful sister is still dressed for a ball, and Yehia himself, clearly the spoiled son, is educated in the city’s best English-language school. Despite the cost, by film’s end, Yehia is shuffled off the Pasadena Playhouse in California for acting courses.
It’s difficult to blame Yehia for his plea, which also is the sort of cry that many young and women make at his age: “Why me? Why was I born here and not somewhere else?”
In real life, after training as an actor at Pasadena, Chahine realized that there would be no room in Hollywood for someone like him, and returned to his now beloved home to become a film director, an extremely difficult task given the Egyptian cinema’s devotion to lavish musicals and historical films. The very fact that Alexandria…Why? in 1979 was viewed in Arab movie houses and won the Silver Bear-Special Jury Prize at the Berlin International Film Festival is miraculous. Even if the film was later banned in Egypt, it eventually went on to become one of the most popular of Arab-language films—this despite its themes of political chicanery and treachery, Jewish-Arab love, and homosexuality.
Although Chahine has long been loved in France, he is still little known in the US. Perhaps it’s time we reevaluate his important career, not just in the context of Western filmmaking procedures, as did Canby, but within an understanding of the more multi-narrative tales of Egyptian and other Mideastern literatures. Certainly, after seeing this film the other day, I am determined to watch Chahine’s several other films.