the desire to glitter


Any detailed summary of Jules Dassin’s The Naked City plot would sound like involuted nonsense, since the point of the story is to circle around itself so that the homicide police, Detective Lt. Dan Muldoon (Barry Fitzgerald) and rookie detective Jimmy Halloran (Dan Taylor), can slowing make impossible and sometimes illogical connections to get their man. Let’s just say that a beautiful model is found dead in her bath tub, clearly murdered. And the police spend days to chasing down clues, including another dead body and an attempted murder, finally linking up the murders with the heads of a jewel heist ring, headed by Frank Niles (Howard Duff) and the murdered woman, with whom he was having an affair, and carried out by two thugs, Willie Garzah (Ted de Corsia) and Pete Backalis (Walter Burke). Finally piecing together the facts, the police solve the case. Enough said. 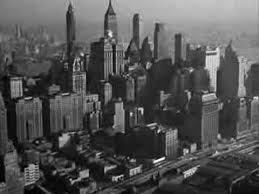 Besides what truly matters about The Naked City is not its somewhat hackneyed police story, but the city itself, a gritty, grimy and glowing Manhattan from another era, skillfully shot by New York photographer Weegee and William H. Daniels. The cinematographers and director determined to film most of their movie on location in a day where all but a few films had been shot in studios or in controlled environments. In a day before easily portable recording devices and in a time when live shooting, as Dassin relates, drew crowds of hundreds, they hid their camera in a delivery truck, created a portable florist stand, and played tricks such as detracting would-be audiences with a political shill, and using the crowds themselves in some scenes.


It is the towering skyscrapers, the vast array of small businesses (now mostly gone from the city landscape), the small corner vendors (one played by the great Yiddish actress Molly Picon), elevated trains, busses, subways, and numerous shots of children playing and fighting not only on the city sidewalks, but in the middle of streets, and even on the Williamsburg Bridge that make this film so very memorable. Because of the sound problems much of the outdoor camera scenes are mostly silent—some of them showing unheard conversations—or are narrated by the producer Mark Hellinger, who died, at a young age,  just before the film was released. His last line, "There are eight million stories in the naked city.  This has been one of them” has become famous for those of my generation who saw the TV series of this film in the 1950s.
The last 20 minutes of the film are the very best, as the murderer and the young detective race through the city, acrobatically jumping backyard fences, cutting in and through vast lower East-side crowds, and finally climbing to the towers of the Williamsburg Bridge.


And, although the script of The Naked City is often mundane and even sentimental, the acting is not half bad, particularly Fiztgerald’s Lieutenant, who he plays as a cleaver, witty, and cavalier Irishman with an accent as heavy as lead. Duff, the failed son of a privileged family, whips up amateur lies faster than the Trump administration, and Dorothy Hart as the murdered woman’s best friend, Ruth Morrison, like the young and handsome Dan Taylor are a treat for the eyes.
At one poignant moment, the dead girl’s mother, Paula Batory (Adelaide Klein) turns in a rather remarkable performance as she damns her daughter for her greedy desires at the very moment she expresses her sorrow and pain for her death. And then Molly Picon’s recognition of the villain suddenly turns to deep regret; she likes the harmonica playing ex-wrestler because he’s good to children.


Dassin reports that after seeing the final film in a movie house, he left early with tears in his eyes after seeing how much the studio had gutted his final cut after Hellinger’s death. Clearly his original version contained a much more nuanced balance between the Capraesque everyday scenes and visits to the homes and clubs of well-healed Manhattanites, presumably to show up just why the dead model and her family-disgraced boyfriend had turned into jewel thieves and to reiterate the differences in the “naked” city between the poor and the rich.


But if you look carefully enough, particularly in the scene where detectives return an expensive ring to the wealthy Mrs. Edgar Hylton (Enid Markey) and compare it with the sad and contradictory grieving of the Batorys, you’ll still see the traces of that important theme. A bit like the mad Mrs. Antony (Marion Lorne) in Hitchcock’s Strangers on a Train, Hylton, although delighted for the return of her daughter’s ring, is a bit incensed that the police have not found her “other” stolen jewels. As she puts it, “I like to glitter,” the very thing the simple gardener Batory and his wife hate, and the reason why the beautiful young lovers turned to thievery and lying.
Clearly Dassin, with his slightly socialist commentary, had hit a nerve with studio chiefs, which would be further played out soon after this film when he was visited at his home by Daryl F. Zanack and told to immediately get himself out of the country, and was soon after blacklisted by the McCarthy committee for his membership in the Communist Party (which he had quit in 1939). Dassin, however, says that underneath it all Zanack was his savior, allowing him to direct one final American studio film, Night and the City in England, before the director would be forced to turn to French and later Greek support. Although Dassin would later return to the USA and direct further US movies and plays, he had been irreparably altered, and his later American films could not match The Naked City, his later French Rififi, or his Greek-based Never on Sunday and Topkapi. A gentle caring man had been transformed into sort of pariah, another of the American Right’s sacrificial lambs.