Watching Luis Buñuel’s 1956 Mexican-produced film, Death in the Garden the other day, I was reminded again of John Farrow’s 1939 melodrama, Five Came Back. There are, of course, obvious differences. Farrow’s work might almost be described as a disaster film that almost saves the jungle escapees of Buñuel’s drama, since when the figures of Death in the Garden come upon a crashed airplane, they carefully pick through their luggage, including foodstuffs, clothing, and other baubles. Although Farrow’s airplane travelers all amazing survive their crash, very few survive their jungle experiences. And in both films, the denizens of the insufferable Eden in which they find themselves, reveal their psychological makeup and the beliefs and failures of believing which define their actions. 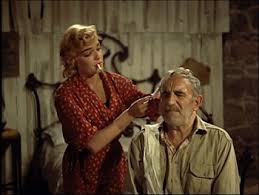 But, whereas, the characters in Five Came Back are basically all types, whose destinies are partially determined even before they crash into the desperate situation in which they suddenly find themselves, Buñuel’s figures seem much more unpredictable. We never might have imagined, for example, that the loving cook, Castin (Charles Vanel), a current diamond seeker who hopes one day to open a restaurant in Marseilles, would, under the punishment of the jungle leafage, go mad and kill half of his fellow travelers—just as we never might have imagined that his beloved mute daughter, María (Michèle Girardon) might have been strong enough to be one of two survivors. 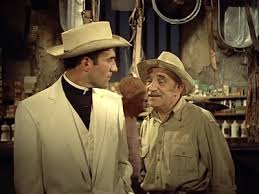 We can almost forget the cinematic reasons for their escape from a growing dictatorial South American country into an environment that they would be unlikely to come out of. It’s all too clear that the corrupt city that they all temporarily inhabit is a metaphor for Buñuel’s homeland, Spain—even given the fact of true dictatorships of Argentina, Venezuela, Columbia, Peru during that very same period. For Buñuel it was both personal and representative of current events.

The director, moreover, based his heroes on personal values as well. While one might have thought that the committed, caring, and handsome priest, Father Lizardi (Michel Piccoli) might  be allowed into the survivor club, as a man who particularly espouses the status quo—and given Buñuel’s own anti-religious perspectives—is not permitted to live, despite his attempts of saving his small band of disbelievers.

You might also have thought the young whorish Djin (Simone Signoret), who, after all, loves and is loved by most of the men of this little party, might be among those “who came back.” And certainly, she is the liveliest complainer of the entire group—and with good reason, since a bedroom existence and complete non-involvement with revolutionary values makes her the most unlikely member of the conspirators. Yet, far beyond everyone else’s obvious failures, she is certainly the most absolute traitor, a woman who might sell out anyone for profit and sexual gain. Her amazing late picture presence, as she dresses up in gowns and jewels stolen from the plane they find crashed into the jungle, reveals her absolutely amoral sensibility better than anyone else in this movie—the priest having already tried to bury the jewels the young María has previously discovered. Djin, above all others, almost deserves to die, despite whatever true love she may or may not feel within. If she has convinced Castin that she loves him, and is attracted the macho-hero Shark (Georges Marchal), and has even sexually compromised the priest who is seen by the community as visiting her—she must die, even for Castin’s sake. 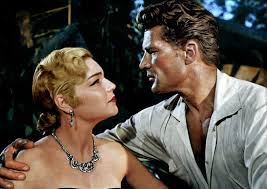 The rakish hero of this director’s tale is the handsome, usually bare-chested, Shark, whose motives are never quite clear, as is his morality, representing the vaguest of the all the figures gathered.  He comes out of nowhere and moves in a moral world where we can never quite be sure where he is standing. Yet, he seems more loyal to his small band of revolutionaries than any of the others, and, despite forays out into a world where he might easily have survived alone, he returns to them, even—when Castin goes mad—attempting to protect them. Clearly, he is a brutal adversary and has obviously survived through his ability to destroy others. But it is only through him that any of the others have the ability to survive, and it is he who takes away the beautiful young María to a new life in Brazil, wherever that may lead them. One suspects that their life together—even if it might not even be a shared one—will end, as it has for all the others, in tragedy. Certainly those who returned in Five Came Back might never have lead “normal” lives.

As critics and even the director himself might argue, Death in the Garden is not one of his films. But I might never forget these pilgrims’ greedy consumption of python flesh or, even more  notably, that python carcass coming to life again through its infestation of ants. And seldom has a jungle such as that Buñuel created ever before or again been so alive with the sense of often invisible life. Again and again, the characters regret that, despite all the noise and frightening possibilities of destruction, they can never actually see the world around them. The jungle knows them in a way that they can never imagine it.

Buñuel’s world in this film becomes an almost surrealist landscape in which survival is simply a matter one’s own inner emotional realities, and as disturbing as these character’s souls are, most of them live only in their imaginations, and, thus, their deaths are certain even before the tale’s curtain rises.

Posted by greenintegerblog at 3:01 PM