Marco Bellocchio | I pugni in tasca (Fists in the Pocket)

sound and fury
by Douglas Messerli

Marco Bellocchio (writer and director) I pugni in tasca (Fists in the Pocket) 1965, USA

Marco Bellocchio’s Fists in the Pocket of 1965, was one of a series of films by younger directors such as Pasolini that completely transformed Italian filmmaking. It had the loose and structure and visual energy of the French New Wave, but expressed its Italian connections with grand family fictions such as The Leopard, without any of the latter’s splendor.
This family was far closer to Jean-Pierre Melville’s—himself a precursor to the New Wave directions—Les enfants Terrible, with its characters” incestuous glances and pants, focusing on the weak-willed and spoiled boy who prefers death to life. There is even an element in this work that might remind one of the wealthy family in Fellini’s La Dolce Vita, of five years earlier, who near the end of the film are visited by the vulgar Italian superstars and the raggazi-hangers-on—only this Italian family of former wealth has now become simply a nest of loonies, who even the course-cut provincials realize are beyond salvation. 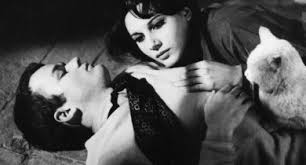 Of the four siblings living on in the decaying country villa, two of the brothers suffer from epilepsy, the brightest of them, Allesandro (Lou Castel) keeping his painful bouts mostly under control with medicine. His brother, Leone (Pier Luigi Troglio), however, although also under medication, still suffers deep bouts of epilepsy, and appears to be something close to a well-intentioned idiot. Their beautiful sister, Giulia (Paola Pitagora), if nothing else, is emotionally troubled, sending the girlfriends of the eldest child, Augusto (Marino Mase) threatening messages in the form of collage cut-ups of words. She and “Ale,” moreover, have something close to the relationship of the brother and sister in Les enfants terribles, he writing love letters and she responding with sexual poses and hugs, while at other times they fall bouts of sometimes quite violent arguments as they chase each other through the house.
Their middle-aged mother (Liliana Gerace), with the demeanor of a permanent saint, painfully suffers it all; but then she is both symbolically and literally blind; she not only cannot see the madness going on around her, she clearly wishes not to know what is happening. Their meals together might be described as something close to a ghoulish funeral gathering.
This family of horrors survives through the unnamed work of Augusto, the only seemingly stable one among them. Yet Bellocchio reveals him to be a brutal opportunist, a man who regularly visits the whores, while yet applying his charms to the local beauties such as the seemingly “normal” Lucia (Jenny MacNeil)—who is startled by the family’s seeming eccentricities.
Despite this “nest of ninnes,” the sensitive viewer does come to feel for each of them, particularly for the brightest and maddest of them all Allesandro, who, as critic Deborah Young, argues, takes on the collective family guilt, determined to allow the bread-earning Augusto the possibility of escaping his familial responsibilities and to live a somewhat normal life—despite the fact that each night, we discover, he and his friends demonstrate their madness by shooting at rats.


While this film has a close kinship with the New Wave and the other specific works I mentioned above, it might be best compared with the American writer William Faulkner’s fictional Compson family of The Sound and the Fury, with Leone cast as the idiot Benjy, Allesandro as the suicidal Quentin, in love with his elder sister Cassie, here played by Giulia, and with Jason cast as Augusto. Their mother, like the Southern belle retired permanently to her bed, has simply become something they have to trip around quietly so that they might awaken her from her descent into death.


Only Bellocchio also reveals this world as filled with young furious rebellious beings who are so angry that they hide their fists from the rest of the world, best represented by Allesandro who plots a kind family suicide, by driving all but August off a cliff. A moment of joyous exhilaration,  as he attempts to drag-race with another car, distracts him from accomplishing his task, and is later forced to “do-off” the family members one by one.
He first pushes his mother off the cliff to her death, then poisons Leone with extra dose of  his medicine, while putting him into a bath. Giulia almost does herself in by falling down the family staircase  in reaction to Leone’s death, perceiving that her beloved “Ale” has done him in; and, even in the throes of her recovery, Sandro (another of his family nicknames) is almost tempted to smother her to death. Is it any wonder that, now married to the local gentry, Lucia, Augusto wants to move out of the villa into an apartment in town?
As she recovers, Giulia reveals to Augusto that their little Sandro has been behind their mother’s and brother’s deaths. But who might believe him, if Augusto took up the matter with the police? And besides, we all know that this cold-hearted beast is not entirely unappreciative of his younger brother’s actions.
Throughout this film, one of the most fascinating aspects has been simply watching Lou Castel’s physical enactment of Allesandro’s demented behavior. Even climbing out of the bed,  the young man goes into a headstand and crawls nearly over the head of the bed. At his mother’s funeral, he desecrates her open coffin by putting his feet into it, as if it were a footstool. He is something like an absurd acrobatic, unable to move forward with any direct movement.
In the very last scene, having nearly achieved his goals of destroying those about him, he goes into what can only described as a kind of transcendent dance of celebration not unlike that of Electra, while listening, in this version, to Verdi’s La Traviata, spinning around the room while uttering a strange series of animal cries unknown to human language. Suddenly he is again struck down by the painful throbs that emanate from his head, and which only Guilia can calm.


In the next room, she realizes what is happening to her brother, as he screams out for help. But this time, a bit like Bette Davis in The Little Foxes, she ignores his cries for help, remaining in her bed, as we watch Allesandro physically “explode” from within, presumably finally finding peace in a literalized death rattle. Even if it is not quite the suicide Faulkner’s Quentin planned for himself, it is close enough that we recognize he is now free from the world that had so tortured him; and Guilia, somewhat like Cassie, can now explore her own endless trip through a tortured past, while Augusto, like Jason, can take his  meaningless drive into the future.
Throughout, composer Ennio Morricone, through an almost ethereal series of bells and gongs, has made aware, simultaneously, that we have been witnessing a kind final rites ceremony for this unhappy family, none of whom are truly capable of surviving in the real world.