the weak and the strong
by Douglas Messerli 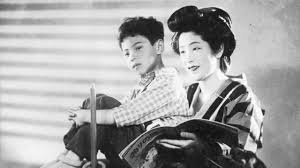 As the movie opens, she is returning from a trip of what was evidently several weeks. Although it is never explained where she has been, we clearly perceive that she has probably gone away with a client on a sexual tryst. In her absence Fumio has been cared for by the kind unnamed elderly couple (Jun Arai and Mitsuko Yoshikawa) who also rent her a room, and think of the child almost as a grandson.
Fumio is delighted by his mother’s return, and asks if she has brought him a present. She apologizes, but explains she will soon bring him another “toy” even though it is clear she has so little money that everything she makes goes for food and rent; she is forced to attempt to borrow on her “salary” from the mean-spirited proprietress of the bar where she works. A seedy denizen of that bar, a Captain (Takeshi Sakamoto) intercedes, providing her with money, but obviously expecting favors in return.
Like the hostess featured in Naruse’s wonderful film of three decades later, When a Woman Descends the Stairs, it is obvious that Omitsu is a skilled worker, who is popular with the men, but who would also prefer, were few. 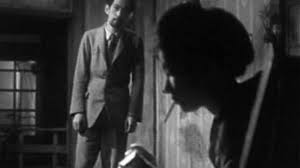 Suddenly into this stew of repressed desires and dreams comes Omitsu’s former husband, Mizuhara, a handsome but frail individual who regrets his previous choices, and is desperate to simply see his son.
At firs Omitsu, still hurt by his abandonment, absolutely rejects him. She argues that his behavior alone has helped her to be hard and strong; pleading and tears no longer affect her. Indeed, if there is any one “theme” of this film it is her inner strength and her determination that her young son grows up to be an equally “strong” man.
Yet when, accidentally, Fumio enters the room during their conversation, and she sees the immediate bond between the two, Omitsu displays her own weakness; she still loves the man who has failed her, who can find no new employment. As Mizuhara, himself, puts it, he has “no luck with work.” Most of the available jobs demand hard labor, and his thin, almost sickly frame, immediately disqualifies him from those jobs.
His wife allows him back into her life if for no other reason that he can play the doting father, and, with few illusions, even if he might wish to be able to free her from her nightly role as a kind of geisha—the only traditionally dressed woman in the jazz-and-dance loving bar. Naruse is particularly wonderful in conveying to us, through the language of the silent screen, just how bifurcated Omitsu’s life is between her precious day hours with her son and her free-wheeling night life. 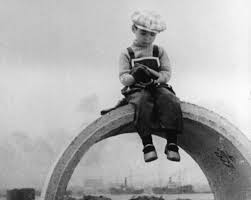 The director also begins to build up, through subtle directorial moments, the very precariousness of Fumio’s life, positioning the child, at one point, on a large concrete tube as he watches his father clumsily playing baseball with slightly older children. In this marvelous scene, we not only recognize that Mizuhara is still a child at heart, unable to even participate in the adult world wherein he might protect his son, but also observe, in the strange positing of the child, just how dangerous Fumio’s young life is; and, of necessity, we can foresee that he will suffer some sort of disaster.

Hit by a car, Fumio survives nonetheless, but he needed hospital care spirals his already poverty-stricken family into a situation from which they can never escape. Since Mizuhara has failed at finding a job, even though he vaguely attempts to find one, it is clear the Omitsu will have to give into the demands of the much-hated Captain.
Even worse, determining to take his share of the responsibility, Mizuhara commits a robbery, attempting to reward Omitsu with the money not only to live up to his patriarchal duties, but to protect the life of his beloved son.
If as an immoral woman, Omitsu is string, as a highly moral mother she is even stronger, and will not accept his stolen gains, insisting that he turn himself into police, and serve out whatever sentence they my invoke. Recognizing the he has failed yet again. Mizuhara determines to leave—if for no other reason than to allow Omitsu to support her son in a way that does not involve her in his criminal behavior.
He leaves her, this time forever, by drowning himself in the nearby ocean, and, even more horribly, with his punishing act of writing a desperate suicide note.
His wife returns of her suffering son to answer his questions about where his father has gone by angrily declaring him a coward, a weakling, and again instructing her son to grow up to be strong. She will certainly have to be, since she clearly will never find salvation from the life she hates.
Along with Ozu’s silent works, this Naruse film is perhaps one of the most-loved silent movies of Japanese cinematic history. And one can easily perceive why. Naruse reveals an unforgiving world, not only for women, but for men who cannot live up to how the society might determine to define them. No loving society can ever survive on a dichotomy of the weak and the strong; even the resilient Omitsu knows that, but has no choice but to reiterate the cultural lie. Surely, we realize, Fumio will also suffer for its absurd demands.