how to live life
by Douglas Messerli 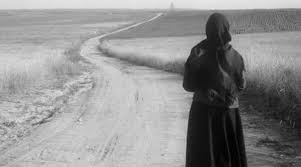 Certainly, the work begins as a kind of dark comedy, as Aloysha and his comrade are trapped in a battlefield as invading German tanks move toward them. The friend, frustrated with their lack of cover, attempts to escape and is immediately shot down. The more foolish—and throughout this film, Aloysha is presented as a kind of holy fool—escapes only after the tank has literally run over him; he has no possible hope of escape in the pock-marked earth in which these behemoths gather to destroy him. He can only jump from small dugout to another, finally, quite by accident, finding an automatic rifle which he takes up instinctively only to survive. Miraculously he destroys one tank, and then a second. And he, as Soviet forces fly in to destroy the others, suddenly becomes a hero.

The fool that he is, he rejects a ribbon or a commendation for a quick trip home to his poor mother so that he might repair her leaking roof. We now know he is truly an innocent and holy fool, and the general cannot refuse such a simple and meaningless request. He asks only for two days, but the general allows him nearly a week.


As we soon learn, he will need far more time, as he meets a depressed older soldier, certain, now with a missing leg, that he will be rejected by his wife, and later a young stowaway girl, determined to return to her husband, Shura (Zhanna Prokhorenko), a girl as innocent as he is, but far more terrified by her journey. He saves a disillusioned soldier’s life and promises to deliver up soap to his wife. He quickly demonstrates his protective nature to the young Shura, ultimately gaining her trust and amazement that a man like him might even exist. Along the way, he bribes a greedy trainmen, misses his connections, and time and again demonstrates his total belief in human goodness, winning friends wherever he goes—all despite the fact that we already know that this “ballad” to be a sad one, with a horrible ending (never actually detailed) for the truly brave and quite idiotic young soldier.
Chukhrai reveals his character in loving realist detail infused with sentimental shadings. But we never feel he is quite manipulating us in the process. The young actor, Ivashov, is so utterly convincing that we’d ourselves, if forced to enter this terrible terrain, would surely follow him to his destination. People are simply attracted to this highly moral figure, and he, recognizing their evils, accepts and also rejects them according to their worth, taking back the soap from the cheating wife and awarding it instead to her suffering father and mother.
Shura finally comes to trust him so fully that, when after a run for water during a station stop, he does not return, she waits for him; and she finally admits, in what we, if not our innocent hero, perceives is a complete embracement of his love, that she has no fiancée, presumably ready to accept his kisses. But he moves only forward for, finally, only a few moments time left to see his mother, and giving up all the love he has offered others.
It, finally, is that tragic fact, that this boy so full of joy and love can’t truly receive it from all the others he meets, that makes Chukhrai’s film so totally international. He’s not just a Russian soldier of World War II, he is everyone who believes and trusts, he is every young man so in love with life that he seems almost invincible. Unfortunately, the world does not allow such a being to easily survive.
Despite competition at the 1960 Cannes film festival between international giants such as Federico Fellini’s La Dolce Vita, and new works by Bergman, Antonioni, Buñuel, along with the American blockbuster, Ben Hur, Chukhrai’s small Russian film received great acclaim. As critic Vida Johnson has written: the Soviet filmmaker Sergei Gerassimov explained the film’s fresh appeal: “The pathos of Fellini in La Dolce Vita could be put this way: One should not live like this; the pathos of Chukhrai in Ballad of a Soldier could be summed up as: We should live like this.”