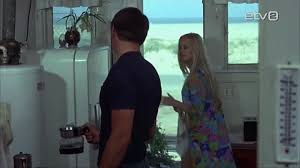 I have long loved Jacques Demy’s films, but I have to admit, from the start, that his first all-American production, Model Shop, is filled with extraordinarily bad acting by Alexandra Hay as Gloria, the girlfriend of our hero, George Matthews (an appealing, if also mediocre performer, Gary Lockwood), and the numerous minor characters, whose acting seems to be out of some grade C film. The only professional among them is Anouk Aimée, who played the original Lola in Demy’s 1961 film, and admits in this work that her real name is Cécile. I have to admit that she was far more charming and energetic as the Lola of the earlier film, but then she has since been completely abandoned by her husband, who came under the magnetic charms of the fellow gambler, Jackie Demaistre (played in the original by Jeanne Moreau in his Bay of Angels), and is here forced into the porn industry simply to survive and raise enough money to return to her young son in France.
In some senses, the bad acting of this film actually helps it, in that it makes it far more like a Hollywood soap opera, taking it out of any realistic context, and allowing for the impossible series of events in which the unhappy, former architect (totally impossible to believe), Matthews, suddenly falls in love with Lola, after seeing her for a few moments in a parking lot, where he has visited simply to see if he might get a loan from the lot attendant to help raise a $100 for his overdue car payment. Just as in soap operas, Lola so catches the attention of our lothario-hero that he follows her to a Hollywood Hills house, from where he catches a glimpse of the views of the city that so enchants any of us who love this city—as he describes it later, it has helped to make him realize that he truly does want to become an architect, presumably to build all the beautiful high-rises we are currently encountering, and which many citizen organizations today are determined to oppose; Matthews would even tear down the Empire State Building and rebuild it in a red copper.
Demy, in fact, in love with Los Angeles, takes us on a fabulous tour of the city of 1969, in which you could still find a parking place on nearly any street, and the entire city appeared to be in transition, a beautiful place that had not yet become developed. It is a lovely and quite delusional place, with tawdry bars and porno shops (including the Model Shop wherein Lola works), a kind of over-developed suburbia where, particularly when the lights come on, might make you imagine you are living in a vast urban world that had not yet bloomed into its true existence. Certainly Matthews’ own house, probably in the midst of the still active oil fields of Culver City or even further south, is not at all a paradise, but is a world of constant noise: oil rigs digging throughout day and night, airplanes flying overhead, and a general noisesome interference of what might otherwise be described as normal life.


Of course, normalcy, throughout this film, has to be seen through a strange lens, wherein Matthews’ girlfriend is determined to become the newest Hollywood couch baby, ready and willing to sleep with anyone to make her way up the ladder to an actual film role.
The diffident Matthews is her opposite, a man with a good education and a regular job at an architectural firm, and who gives it all up because of his impatience at having to spend perhaps 10-20 years designing water pipes before he might get a chance to really proffer up a design for a building. Besides, Matthews, like so many of his friends, lives in the terrible times, when the possibility of being drafted to Viet Nam is a daily horror—and before he can even quite talk about that possible disaster, he is called up to the draft board in his native San Francisco.
After Howard and I had met and begun our long term relationship, I too was called up, bussed off to Milwaukee and faced the with terrible possibility that I might be shipped off to the war. Like Matthews, who fights with his patriotic father, I fought with mine, who traveled from his home in Iowa to Madison, Wisconsin in order to counsel me, since I had bluffed that, if drafted, I would leave the country. All I had to do was convince the military psychologist that I truly was gay—and he, evidently, knew it the moment I met with him—and I was given a 4F, meaning I was incompetent for military duty. I fear for those young gay men who fear battle these days, particularly if the draft is restored.
But Matthews is clearly a heterosexual, and once he meets Lola and stalks her, discovering her, again, by “coincidence” (as always, my favorite word), in a small shop which allows its customers to take revealing pictures of their clients in tiny porn-like rooms, falls in love—who wouldn’t?
Eventually, after spending some the money he has finally been loaned to pay for his car, Matthews discovers her again, convincing her to share a one-night stand—although both, perceiving themselves at a kind of dead-end, wishing it might become something different. But she is off to France, and, quite gallantly, he gives her his remaining $75 for her journey, and she, a bit older and wiser, bolts on the first plane out.
Matthews is left with nothing—his car having been repossessed and his girlfriend leaving with the young man who will help her transit into soap-bubble commercials—finally having to face up to his own future and the real possibility of death.
Demy had already done all of this in his 1964 movie, Les Parapluies de Cherbourg (The Umbrellas of Cherbourg), which also ended with the wrong pairing of lovers.
But in Model Shop, it simply doesn’t seem to matter as much. First of all, Matthews and Lola are older, and realize where they stand, as he bravely reports in a telephone call to Lola’s roommate: "I just wanted to tell her that I love her. I wanted her to know that I was going to begin again. It sounds stupid, I know. But a person can always try." If nothing else, both have now attempted to start over.
And Demy, meanwhile, has found a new exciting love in the city which both these characters, he, and I so love, Los Angeles. Too bad Demy can’t revisit the wonderful city as it exists today; perhaps he wouldn’t love it half as much, but I love it even more in all its shimmering urban beauty.