Lonny Price | Best Worst Thing That Ever Could Have Happened

crushing and beautiful
by Douglas Messerli

How even more painful, after writing the above, was it to watch the absolutely charming documentary by Merrily We Roll Along original cast member, Lonny Price, based on TV tapes of the time collected by ABC News, Best Worst Thing That Ever Could Have Happened, which I watched yesterday afternoon.
It appears to be a story of how what might have been perceived as the best possible musical—directly after Sondheim’s greatest achievement to that date, Sweeney Todd—and codirected by his then favorite collaborator and multi-successful director, Harold Prince. How could anything go wrong? Particularly given the total commitments and beliefs of the young, very young cast, who were, after many, many tryouts and stressed re-appearances, were finally chosen for inclusion. They included, given their age, almost all unknowns, but now several of who have become quite famous, Lonny Price himself, the young curly-haired Charley Kringas (the sadly tortured writer who was punished most by Franklin Shepard’s neglect), the talented Jim Walton as Franklin Shepard, Ann Morrison (as the even more-neglected Mary), Jason Alexander (as Joe, the sleazy producer), and Terry Finn as Gussie—all young actors from 16 to 25. 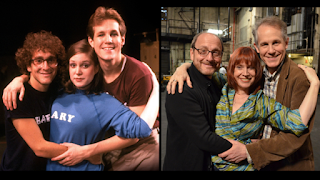 Sondheim and Prince had determined that they wanted to go back again in time, to relive their dreams and possibilities as young people, obviously, without saying it, betrayed by their own Broadway successes. The utterly dreaming young cast members—every one of them reminding me, so painfully, of my own total commitment to theater from an outsider’s perspective (they, as I have done with dozens of other composers years before, had brought all of Sondheim’s records and memorized them, in whatever American back town in which they existed)—and their excitement in even having been chosen to be part of this musical experiment is, even today, startlingly palpable. All true believers, and buoyed by their amazing commitment, so too where the musical’s creators. How could anyone imagine, particularly given the remarkable songs the great composer had created, that they wouldn’t naturally be applauded and successful?
Who might also have imagined that in a musical in which only young people were employed to perform quite elderly and wiser folk, who had now suffered the indignities of their mistakes, would also dress all the actors alike, with only their names emblazoned across their sweatshirts? Along with the plot moving backward to forward in time, given the youth and seeming conformity of the cast, how could it not totally confuse its audience? Yes, one might argue that Pinter (that very serious playwright) had also used the backwards-forwards plot. Others had certainly embraced younger actors in more elderly roles. A conformity of roles might have been used previously in the theatrical world (remember Brecht?) to make a broad statement. But surely not all in a single “popular” musical entertainment! Even after the grand guignol opera of Sweeney, audiences were simply unprepared for this series aberrations. Who are these people, what are they singing about, and where in what direction are we moving, the audiences of the day must have asked? The 1981 opening lasted just 16 nights, and the cast was, quite understandably, completely devastated, their careers quite clearly in duress.
This documentary is not simply a story of a failed musical, but a story of the hundreds and hundreds of Broadway watabees, who, after performing in even successful works, have had to move on, into other careers, other lives, in order to simply survive. No one promises any actor, young or old, an endless career of Broadway successes—and this, of course, was no success, these wonderful young figures having had no careers on which to base a future on Broadway.
Lonny Price went on to have a successful career as a director of Broadway works, including many other productions and revivals of Stephen Sondheim works. Iowa-born Ann Morrison went on to star in numerous regional productions of musicals, and eventually moved off to other career choices. Jim Walton also appeared in regional productions until he returned to Broadway in Guys and Dolls and a revival of Bye-bye Birdie. Jason Alexander, as most know, went on to have a very successful acting career as an actor in Neil Simon plays, and later a television regular in Sienfeld, as well as in films such as Pretty Woman and Love! Valour! Compassion! Others in the original cast simply turned to different careers. That’s what acting is all about, how to survive offstage, outside of temporarily so very bright lights.
I once met a singer from the musical Cabaret, who, with another performed the horrifying yet quite beautifully sung “Tomorrow Belongs to Me,” who had since lived his live as an advertising copywriter; he didn’t seem unhappy—well maybe a little. I think that was why, despite the encouragement I received and the desire I embraced, I never did try out for a Broadway musical. Even if I got a part, what, in the end, would it mean?
This cast of talented young actors got the chance again in 2002, thanks to Price, to do it all over again, even for just one night. They were now all adults, of the ages which the characters were to have originally been, and they attracted a huge crowd to what now had become a cult musical, performed by hundreds of major Broadway actors, including Patti Lapone and Mandy Patinkin, who was too old for the first production
What is a Broadway star? These young people all saw that great possibility whisked away from them. Unlike Fanny Brice, there was no Flo Ziegfeld for them, not even the great Stephen Sondheim could do the magic that audiences stole from their premieres. Frank Rich, then critic of The New York Times, bemoans but does not deny his review of the day, even though it plainly pained him to write the news:

As we all should probably have learned by now, to be a Stephen Sondheim fan is to have one's heart broken at regular intervals. Usually the heartbreak comes from Mr. Sondheim's songs -for his music can tear through us with an emotional force as moving as Gershwin's. And sometimes the pain is compounded by another factor - for some of Mr. Sondheim's most powerful work turns up in shows (''Anyone Can Whistle , Pacific Overtures) that fail. Suffice it to say that both kinds of pain are abundant in ''Merrily We Roll Along,'' the new Sondheim-Harold Prince-George Furth musical that opened at the Alvin last night. Mr. Sondheim has given this evening a half-dozen songs that are crushing and beautiful—that soar and linger and hurt. But the show that contains them is a shambles.

Perhaps giving the not so high quality of so many of the musicals since, “crushing and beautifuly” songs should have been enough.