waiting for the cowboy
by Douglas Messerli

Jack Gelber (script), Shirley Clarke (director) The Connection / 1961
Yesterday afternoon I finally got an opportunity to watch Shirley Clarke’s 1961 film, The Connection. Milestone re-released this UCLA restoration back in 2012, but their price was somewhat prohibitive, and Netflix never picked up for their library. I finally found it on Filmstruck. 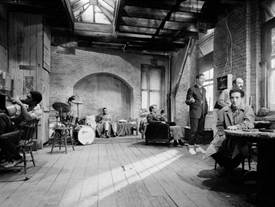 Based on the 1959 play by brilliant off-Broadway writer, Jack Gelber (see my piece in My Year 2003), Clarke’s film uses the characters who are supposedly filming  the men waiting in a run-down apartment for their next fix, to create a sense of watching a documentary about a documentary, particularly when the unseen cameraman (with the voice of Roscoe Lee Brown) refuses to turn off his camera while the director (William Redfield) coaxes the addicts to “just be themselves” and adjusts the various lights and microphones strategically laced through the room.


The apartment, belonging to Leach (Warren Finnerty), is filled with Ernie (Garry Goodrow), a former saxophonist who has sold his instrument to purchase drugs, Solly (Jerome Raphel), Harry (Henry Proach), and members of a jazz quartet, Freddie Redd, Jackie McLean, Michael Mattos, and Larry Ritchie, who perform throughout the long wait.
The angriest of these is Ernie, who challenges and taunts the director, Dunn, and, along with others, insists that if he is going to watch them shoot up, then he also—pretend hipster that he is—should take a dose of heroin. And later, Dunn does just that, immediately growing sick even as he continues “capturing” the events.


Perhaps the oddest of this group is Solly, who is highly educated, speaks two languages, we are told, and, apparently, since we see him leafing through the pages of a male magazine, is gay. Leach is described as a closet queer.
Each of these figures gets a chance to talk, just as the jazz musicians all get an opportunity to show off their musical talents before Cowboy (Carl Lee) arrives, surprisingly along with an elderly woman called Sister Salvation, who might, we first might imagine, be hooked as well, but whom, we soon perceive, is completely unable to even grasp what is going on—which merely emphasizes the strangeness of a group of men all gathered together in a small room, pacing in anticipation. Dunn, evidently, has paid for this fix.


The amazing thing about Gelber’s play and Clarke’s brilliant filming of it, is that none of these social outcasts is chastised or punished for their drug habit; even though Leach, who obviously has been on drugs for years, almost dies when he demands more heroin, Cowboy temporarily saving his life. But none of them truly regret their habit nor are they expected to. The police never show up—although at one point, Redd played a joke on his cast members by asking a real policeman to knock on the door of the set. Their only anger comes from having to suffer one another’s company and spend their day waiting, a bit like Beckett’s characters, for their version of Godot.
It is hard to imagine in 1961 (and even earlier at The Living Theatre in 1959) that such a no-nonsense approach to drugs would be even possible. Clarke’s gritty film however was banned after just two performances, not because of its subject but by of the use (about 12 times) of the word “shit,” referencing the drug not its bodily meaning. Yet, of course, it is in the bathroom where each of them gets their shot by Cowboy, and their degradation in that act is apparent.
Clarke appealed the court decision, and eventually won, but by that time the film has lost its underground appeal. And it was reviewed badly in The New York Times, despite having garnered acclaim in its original showing at Cannes.
Today, we might almost be witnessing an historical encounter that thousands of middle-class people now enact in cars, shopping center and restaurant bathrooms, and at home, apparently, every day. But in 1961 most Americans had never before even imagined such a scenario, let alone seen it played out in a film or on a stage.
A strange note: in the original production, which included some audience involvement, actor Martin Sheen played “the man in the audience.”
I’d love to have seen that play, and I wish I might have included it in Mac Wellman and my anthology, A New American Drama: 1960-1995; Mac had wanted to include The Connection, but I stubbornly held to our arbitrary 1960 date. Today I cannot imagine a better production than Clarke’s, whose black-and-white rendering parallels Sidney Lumet’s film of Long Day’s Journey into Night of the very next year.