house of actors
by Douglas Messerli


After the production of O’Neill’s play Long Day’s Journey into Night at the Geffen Playhouse, I determined to revisit the 1962 film version, directed by Sidney Lumet.
I have often stated that I think this is one of the great interpretations of the O’Neill drama, given the high standards of performance by Katharine Hepburn, Sir Ralph Richardson, long-time O’Neill performer Jason Robards, and the young, but quite capable, Dean Stockwell, whose performance seemed to have been much stronger in this viewing than I originally recalled it to be.
First of all, what immediately struck me is that this film, coming in just under three hours, includes so many scenes that were simply cut from the performance I saw the other night, which, perhaps, at times ineffectually literalizes the information we receive about the Tyrone family, but also truly enhances our outstanding of their lives. 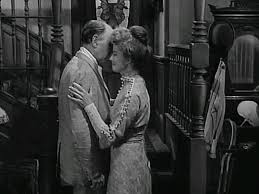 Far more importantly, in this review, I realized just how truly theatrical—and I mean that quite literally—O’Neill’s play is. Many critics have compared the great American playwright’s work to Anton Chekov, and those comparisons, often bear fruit. After all, Chekov’s The Seagull, for example, is also about a young would-be playwright, actresses, and a noted writer. But what most struck me this time through—and how could it not be with the acting credits of its cast—was just how much about theater this play was concerned. Of course, James Tyrone, Sr, is an actor, a fact of which he will never let anyone in his family forget, citing Shakespeare and his numerous other roles endlessly, even though we know him to be currently a ham actor, a role which he brings to all of his encounters with life, including, we perceive, the offstage encounters with numerous of his friends, who stiff him, while listening to his almost endless monologues, with bad property deals. Tyrone Sr. is so infatuated with his own voice, and has so memorized the lines/lies of his life that he can call them up by rote whenever he needs them. We may even doubt the greatness of his acting ability which he proves again and again through perhaps a non-existent sentences of praise by Edwin Booth—which he has saved, just as his wife Mary has saved her wedding gown, in an old forgotten trunk—but we cannot deny, given Richardson’s grand performance, his powerful gift of rhetoric. Tyrone can spin every sentence he utters upon a whim of emotional shift. One second he is spitting out venom, mostly for the behavior of his elder son, Jaime, but often lashing out equally against Edmund and Mary, while the very next second his whole voice and body rejects his comments with terrible regret. James Tyrone is a shifting phantom out of control, like the nightly fog-horn his wife hates, a bellicose beast (like the fog-horn he snores throughout the night) that is, at the same time, sorry about each moment of speech he bellows out.
As the play continues, he comes more and more to regret his ugly, if elegant utterances. And by the end of the film he has no longer choice but to remain silent.


I had forgotten—and I think the play’s numerous all references to it—that James, Jr., Jaime, not the great actor his father is, also made his living on bit parts in plays on Broadway, mostly through his paternal connections. He too is a remarkable performer, a pretend-cynic dedicated to destroy his pompous father, and, as we discover in the last act, even his beloved “more-than-brother.” That scene alone, in which he admits his love-hate relationship with the precocious family heir, demonstrates his acting talents, and shows up Robards’ acting chops. How can one love another so much to admit his terrible actions which might lead the other to hate him for the rest of his life? Robards hugs his brother to his chest at the very moment when he warns his sibling against himself, admits to his own selfish hate, and his attempt throughout Edmund’s life to bring him down to his own failed and hopeless state. Both father and brother remind Edmund that he mustn’t drink at the very same moment that they constantly offer up yet another glass of whisky. They know it will surely kill him given his consumptive state, but cannot resist helping to kill him in order to alleviate their own sense of worthlessness.
Jaime too, switches masks from moment to moment, best friend and companion—even a brotherly lover—to self-loathing hater, a man who would easily, like Jacob imagine killing his younger brother, Esau. After all, Edmund has, so to speak, already gone to the heathens, traveling over the globe; while Jaime, despite his hatred of his father and mother, has stayed on to tend them.
Just like his father, Jaime switches from his cynicism to a sentimental maudlin emotional response that comes from a career of acting, hating himself so desperately that his is willing to save fat Violet from being fired by joining her in a night a painful sexual release. In the end, Jaime is a ham actor in his father’s tradition.
But Mary is the surprising one, and the way Hepburn portrays her, we recognize that she is the best actor of them all; even from the very first scenes of the work, teasing her husband for his endless snoring, and her portraying her own night wanderings as an omission of worry for her younger son’s health, we perceive her immense capabilities of portrayal, of lies and deceit. Yes, she is “watching” them “watching her,” the way any great lead knows she is being watched even as she is watching her audience admiring her. And we grow quickly to perceive that Mary has shifted her role from being the now recovered addict to a highly tragic heroine even before the curtain has been raised.
Hepburn, in this film, is at her very finest: embracing her family members at the very moment she slits their throats, offering up her saintly presence while coquettishly playing a bitter whore. I now realize why Hepburn’s performance has never left my mind. At every moment she mercurially shifts from one person into another, loving and hating in the very same breath, blaming and forgiving, imagining and forgetting. No one cannot fall in love with her and no one with, even a little bit of sanity, cannot detest her. She is constantly on fire, a beautiful flame not to be entrusted to mankind. She has made up a person so costumed and perfect—her constant fear of her hair having fallen down betraying her own highly artificed demeanor—that she is a kind of living monster, all mask with, ultimately, no life within.
Even her maid, Cathleen, cannot imagine why her mistress has not gone “into acting.” Who might not imagine that Mary is the greatest actor in her family? But Mary pretends shock, no, she would never have even thought to cross the stage; she is a saint—a woman she claims who once thought of becoming a nun and imagined a career as a concert pianist—the delusions that any great actress must have in order to convince the world of her performative wonders.


And Mary’s world, particularly as Hepburn portrays it, is entirely one of delusion. She literally lives in a past that never existed and plays out that false reality, particularly when she attains the drugged state—O’Neill’s literal metaphor for the mental state of a grand actress—the way Sarah Bernhardt or Eleanora Duse presumably performed their plays. Even Jaime recognizes her as Ophelia.


There is no better actress in the world than Mary Tyrone, and her family knows it. When she plays a role she is lost to the living, she is no longer a mother, a wife. Hepburn has never had a better role.


And then there is Edmund, the observer, the poet, the would-be playwright. Don’t get me wrong: we would love to be one of those spectacular actors around him, but he’s just not the type. And for that reason, Dean Stockwell, a good solid amateur is just perfect for the role. He tries, attempting to describe in great detail how, in a few moments in his life, he has felt at one with nature, alive on the bow of a boat with the sea spewing up around him. But he sounds only like a bad poet, which his father recognizes him to be, praising him for his “touch of the poet” capabilities. But Edmund is consumptive, a man losing his breath—an impossible condition for a great actor or singer, a condition that forces one to leave the stage of life in order to recover. In a house of actors, he has no place and can only exit stage left or right—probably stage left given his father’s operatic penuriousness.
The only way Edmund can regain control is with the death of his dramatic personae, which, in just a few years, he lost, enabling him to create his own very different casts. His second beloved wife and one of his sons themselves became addicts—clearly his was in a family tradition. And wasn’t O’Neill himself a kind of addict of and to the theater, disavowing his own daughter, Oona for marrying another actor, Charlie Chaplin, and herself becoming an actor?
The Tyrone (O’Neill) house was a house of actors, and I believe Eugene, although obviously depending up their kind for the rest of his life, never really forgave their breed for their “false” portrayals of the world. Perhaps that’s why he is so very specific in his dramatic instructions.