pie in the sky
by Douglas Messerli

Wallace Shawn (writer, based on the play The Master Builder by Henrik Ibsen), Jonathan Demme (director; after the unstaged direction by Andre Gregory), A Master Builder / 2013
Adapted from Ibsen’s late play by Wallace Shawn, directed for years in workshop productions by his often time collaborator, Andre Gregory, and directed for film by Jonathan Demme, A Master Builder, as critics have noted, demonstrates the influences of not only these three  creators, but of the brilliant acting throughout, particularly by Shawn as Halvard Solness, Julie Hagerty as his long-suffering wife, Gregory as the elder architect whose career Solness has destroyed, and, most notably, Lisa Joyce as Hilde Wangel, the young woman who expressly remembers Solness’ promises from 10 years previous, when she was just 12 years of age. 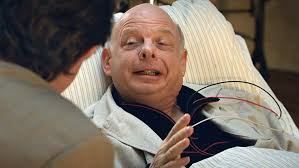 Ibsen is one of my very favorite of 19th-early 20th century playwrights, but his plays, if not carefully directed, are often talkative and stagey, with their realist conventions not always making a perfect fit with their often shockingly didactic explorations into everything from inherited syphilis, rising feminism, and, in this play, a series of egotistical and manipulative actions, including what today we would simply describe as child abuse, by the play’s presumed “hero,” Solness.
Like many plays, however, Ibsen’s hero is a terribly failed man, even a scoundrel who has made himself wealthy not necessarily through his great architectural achievements, but for his


careful recreation of towering “castles” for upper class families. These often fantastical museums to nostalgia might today be compared to the projects of mansionization that are crumbling many well-to-do neighborhoods from New York, Chicago, to San Francisco and, particularly, Los Angeles. The goal is to destroy perfecting charming, “ordinary” homes—the kind of “box” in which Solness’ wife grew up—and turn it into a kind of fairy-tale villa (which even the “master builder” mocks) where the residents can live out lives of fantasy wealth, wealth alone, apparently, not being enough.
Yes, the beautiful 19th century mansions of Nyack which the movie presents as stand-ins for the Norwegian turn-of-the-century creations, do look, today, quite impressive. But even at the time of their building, they were already privately-built museums dedicated to the past.
As Shawn’s version begins, we see the “great” Solness suffering what we might think as a heart attack, hooked up, in a grand but purposeful anachronism to a modern heart monitor. Nurses, dressed of the period, move in and out of what appears to be part bedroom and part of his architectural offices. Evidently, the suffering builder will survive, so suggests Dr. Herdal (Larry Pine), also a regular confidant to Solness’ wife.