out of the kitchen, into the past
by Douglas Messerli

Alf Sjöberg (screenplay, based on the play by August Strindberg, and director) Fröken Julie (Miss Julie) / 1951

When I first read August Strindberg’s Miss Julie, I tried to imagine how this play might be staged. To me it still seems more like a stilted dialogue between figures  standing for opposite levels of class standing than a believable interchange and affair between two individuals who happen to come from the opposite ends of the social strata of 19th century Swedish culture. 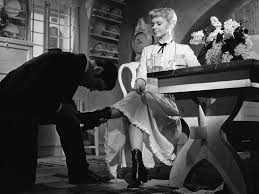 I would have loved to have seen Sjöberg’s original stage production, which obviously kept closer to Strindberg’s original, just to see how he achieved credibility. But his choices in the cinema version make it clear that he, too, must have seen the limitations of the original. For in his film he opens up the previously claustrophobic space of the kitchen, adds large swaths of additional dialogue, and plays out the celebrations of estate peasants on Midsummer’s Eve.
I know that Strindberg surely meant his play to be claustrophobic; that is why the “crazy” Julie wants out. But by confining the play to one room, the author merely accentuates his heavy-handed thematic. We do need to see Julie in her natural element, and in Sjöberg’s evocation of her among her natural surroundings, she (Anita Björk) is a beautiful woman to behold. Without a horse and carriage to drive, her father’s valet, Jean (Ulf Palme) has no real identity; as he admits near the end of their brief affair, he is, after all, still a servant, despite his clever talk and grand ideas of opening up a hotel in Switzerland.


Moreover, Sjöberg gifts these characters with rich if difficult pasts, and, in so doing, transforms Strindberg’s seemingly naturalistic play (one of the earliest of  kitchen-sink dramas) into one that resembles the playwright’s “memory” or “dream” plays, permitting characters from present and past to intermingle within the same frame, and introducing a slightly surrealist air to original.
I’m not sure we need to be told the whole history of Countess Berta, Julie's mother (Lissi Alandh), but in doing so, Sjöberg both questions and reifies Strindberg’s famed misogyny by presenting her as an early feminist who even goes so far as to force all the males of the estate to work at tasks usually assigned to women, and demanding that the women take over the male roles. As the narration makes clear, however, this leads to disaster. That does help to explain, moreover, Julie’s toying with men like Jean and her temporary ecstasy in her one-night stand. It is clearly apparent in Sjöberg’s version that despite her control over men, that Julie has managed to remain a virgin.
If nothing else, her detailed upbringing completely explains her suicide after any dreams she and Jean might have had for escaping this bleak paradise when the count returns and Jean goes back into his reliable servant mode.
Given her upbringing, we realize, at work’s end, that Miss Julie was destined to either be a bitter old maid or to destroy herself. Certainly she might never have served as a companion for a man like her accountant-fiancé (Kurt-Olof Sundström).
Perhaps, if Jean had not caved in, they might have lived out their lives as a  kind of early version of Edward Albee’s George and Martha, torturing each other unto death; Julie’s mother, after all, was a kind of ur-Rebecca, burning down her own house instead of willing the deed to her obedient servant, Mrs. Danvers, as in the Hitchcock telling.
One has to think of Sjöberg’s filmed Miss Julie as a kind of re-interpretation of Strindberg’s play, a work that ultimately questions not only the original construction but its logic. If nothing else, the director, who clearly loved Strindberg, challenges the playwright’s didacticism, opening up at least other possibilities that the stage-bound characters have no room to explore. The beautiful scenes of love and lust on the day in which the sun never sets, remind one, more than anything else, of Bergman’s magnificent Smiles of a Summer Night, made only four years later. That’s good enough for me! (When I wrote this, I had not yet read Peter Matthews essay for the Criterion film version, which points out this same possibility of influence upon Bergman).
And the judges at the Cannes Film Festival voted (with a tie for De Sica’s Miracle in Milan) as the best film of 1951.