Ingmar Bergman (screenplay), Alf Sjöberg (director) Hets (Torment) / 1944
Alf Sjöberg’s memorable movie, Torment, begins with an incident wherein a young boy arrives late for school, missing early morning prayers. As he enters the towering staircases, trying to  escape detection, he is watched over by teacher who, when the boy tries to escape into a classroom, is followed. Together the two play what almost might be described as a kind of hide-and-seek as the determined elder hunts down his smaller prey, evidently so that he can identify and punish him. In this slightly perverted game, we recognize the terror of the tardy child, who does everything he can to maneuver himself out of harm’s way. 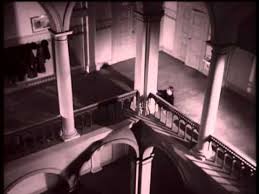 In the very next scene, we see that things are not much different for the seniors of this school, particularly in the classroom of their Latin teacher, who they have nicknamed, with good reason, “Caligula” (Stig Järrel), who torments them during their attempts to translate Latin passages into Swedish, threatening and demeaning them upon even slight infractions, and demanding immediate rote memory of Latin endings. Like the teacher in the first scene, Caligula seems to delight in their petty errors and his gratified by serious failures, awarding demerits.


Although all these young men are terrorized by and hate him, one handsome student, Jan-Erik Widgren (Alf Kjellin) is clearly Caligula’s favorite target, continually putting the diligent Jan-Erik to the test, and threatening him, pointing stick in hand, for even the most minor of mistranslations and for his use even of the Swedish language.
Although neither the director nor the screenwriter, Ingmar Bergman, openly suggest any sexual reasons behind Caligula’s torture of the boy, it is apparent that, as in the film’s first scene, there is something perverse in the teacher’s obvious focus on Jan-Erik, certainly the best-looking boy in the classroom; if his behavior isn’t a manifestation of a sublimated sexual attraction, it is, nonetheless, possible that the ugly older man is envious of young charge, and determined, for that very reason, to do him in.
Throughout the film, moreover, Caligula admits to others and the headmaster that he has recently been “sick,” implying that his intolerance of his students has something to do with a recent illness from which he has apparently not yet completely recovered. He never makes clear what this illness might have been, but surely it must have a relationship to his treatment of Jan-Erik.
When, soon after, we discover that the sleazy teacher also has his eye on a young worker in the local tobacconist shop, Bertha, we perceive that this “sickness” is even deeper that we might have imagined. If he, at least, pushes Jan-Erik away from him or, more simply, wishes to control him, his attempts to woe Bertha are far more nefarious and disgusting.
Caligula, we soon discover, has been following and, possibly, threatening Bertha for some time, leading her to drink. When Jan-Erik, after a night out with his classmate, discovers her  stumbling down a staircase, utterly drunk, he kindly attempts to help her, discovering her address, and leading her to her home.
Terrified that her mysterious stalker will try to enter her apartment—even though she has changed the lock on her door—she begs her underage savior to stay with her, not only depriving him of his needed study time, but ultimately seducing him—in an act that today we would brand as child-abuse—into her bed.
At least her “abuse” is of the pleasant kind, and this young Werther—Jan-Erik imagines falling in love with one woman for whom he will play his violin—quickly falls madly in love with her, abandoning his studies to be in her presence.
If Caligula has long stalked her, with Jan-Erik’s interest in Bertha he becomes even more compelled to torment the woman—and, in his own version of child-abuse—his young male charge.
One night Jan-Erik arrives to find his lover dead, with Caligula hiding in her clothes closet. Many have compared the scene which reveals Jan-Erik’s discovery of the presumed murderer as resembling scenes from Murnau’s Nosferatu, but I think the images more closely resemble the depiction of another child-murderer, Peter Lorre’s Hans Beckert, in Fritz Lang’s M. Like Beckert, Caligula seems to know no sexual bounds in his destruction of the young and beautiful.
Although Jan-Erik calls the police, accusing Caligula as having murdered Bertha, like all the adult beings in this film, the police dismiss the boy’s assertions, finding that Bertha died of unknown causes, freeing Caligula to not only slap Jan-Erik in front of the far gentler headmaster (Olof Winnerstrand) but to demand the boy’s expulsion.
Evidently the original film ended darkly, with few possibilities for the now societally ostracized Jan-Erik. Given the criticisms of this first version, Sjöberg and Bergman added a final scene when, after all the other students have graduated, the headmaster visits Jan-Erik, now inhabiting Bertha’s old apartment, telling him that he will help him to get back on track and find a new life.
Caligula arrives to seek forgiveness for his behavior, but his former student turns from him, walking into the light, now free from all the “educational” abuse that even the family doctor has described as something closer to living in a concentration camp (a theme which is underscored by a scene showing Caligula reading Dagposten, the Swedish Nazi newspaper).
For that last scene, Sjöberg was absent, having other commitments, enabling the young Bergman—the man who would eventually rise to take over Sjöberg’s position as the most noted of Swedish directors—to direct his very first scene.
But this picture is still very much Sjöberg’s film, with its intense use of deep blacks and luminescent whites, along with the director’s fascination with winding and treacherous staircases—clearly representing the terrifying paths these young students have daily to  undertake in order to become adults—and the many mirrored images which the children (and audience) perceive but seemingly have little effect on the frozen-minded and visually blind adults. As in most of this director’s film, Torment’s theatricality is quite thrilling, reminding us that, if he was a great cinema director (this film and his later Miss Julie winning awards at Cannes), he had an even more notable career as a stage director, producing throughout the 1930s-1960s some of the best of Swedish and world theater.