from being to have been
by Douglas Messerli

Donald Cammell (writer), Donald Cammell and Nicolas Roeg (directors) Performance / 1970
If you can say nothing else about the films of Nicolas Roeg—and, obviously, there is a great many things to be said—he is the only director I know of who cast films with two of the greatest music performers of the century, David Bowie in The Man Who Fell to Earth (1976) (see My Year 2016) and Mick Jagger in the movie under review, Performance (1970). He also worked with singer Art Garfunkel in his Bad Timing of 1980. Clearly, he was able to draw in these larger-than-life figures through his sexually-obsessed, gender-bending scripts, as well as the visual excessiveness of his images. 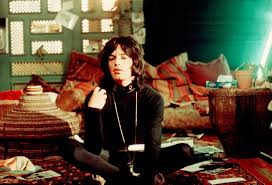 Certainly, one might be able to describe his Performance, which I first saw the year of its creation, as narratively experimental. Co-director and script-writer Donald Cammell was highly influenced, so he claimed, by the writings of Jorge Luis Borges—although watching this movie the other day, it took a great leap of imagination to perceive any possible relationships between this rather seedy look at a down-and-out British rock star, Turner (Jagger) and the master of linguistic conundrums.
I don’t actually remember my original reaction to this film, although it probably was closer to the confusion of critics of the day which saw it as a messy, but somewhat profound exploration into identity, than I’d like to admit. So shocking did it seem in 1969 and 1970 that, purportedly, one wife of the Warner executive vomited upon seeing a preview of the film.


Today, the rather campy vampings of Turner, his dominate female lover, Pherber (Anita Pallenberg), and their mutual girl-boy surrogate, Lucy (Michèle Breton), seem, in their hippie- l ike couplings, nearly as innocent as the creatures in orgy scenes of Jack Smith’s Flaming Creatures (1963)—although later outtakes of the sex between Jagger and Pallenberg, then Keith Richards’ lover, where turned into a semi-porn-film. In the end, I’d compare the whole of Performance as having closer ties to Jim Sharman’s The Rocky Horror Picture Show than any other film of the time.
Except for a very crucial difference: the object of Turner-Pherber-Lucy’s clearly perverse desires, Chas/Johnny Dean (James Fox) is anything but innocent. As a virulent intimidator of a gang headed by Harry Flowers (Johnny Shannon), Chas musses up the lives and bodies of nearly anyone who crosses Flowers, and is willing even to do the same for his former friend (and subtly implied former lover), Joey Maddocks (Anthony Valentine)—except that Flowers, a wise monster who believes that it is necessary to keep the personal separate from business, denies his hit-man the pleasure. When Chas, nonetheless, tries his methods of intimidation on his former friend/possible lover, Maddocks and his new friends retaliate, pouring red paint over the walls of Chas’ apartment and threatening him. Chas’ responds by shooting and killing Maddocks, and, as we all perceive as now necessary, rubbing the red paint into his hair, goes on the run.


Overhearing a pub conversation, he picks up the rent for a departing black jazz musician and finds himself in the basement apartment of Turner’s drug-and-sex obsessed den. Although Chas, now Johnny Dean, claims he is a performer, a juggler by profession, he has no defense against the sexual and mind-shifting machinations of his new landlords, who, through the help of halogenic mushrooms, break down Chas’ macho personae, gradually transferring him from a failed sexual encounter with Pherber, to one with Lucy, and, ultimately—although it’s never visually presented—with Turner. Chas’ quickly goes down the rabbit hole to turn into a kind of mirror image of the male-in-drag Jagger, until he is no longer clear about who he really is.
There are some very clever lines along the way, one in which Chas’ challenges the rock-singer to imagine what he might look like when he is 50 (an vision of which challenges us all as Jagger has turned 74! (He was 47, almost 50 at the time of the film’s making). And the handsome James Fox, who had portrayed a character similar to that of Turner in Pinter’s sexually-laced The Servant (1963), is the nearly perfect figure for Chas.
Nonetheless, the plot gets lost along the way, as Chas stupidly (and amazingly innocently, particularly given his line of work) reveals his location, and Flower’s men come for him, Chas, in the ruckus being compelled to kill the man, Turner, who has clearly shorn his locks by giving him a female wig, which he now seems determined to wear even unto his death.
By the end of Performance it is hard to know what the movie’s intentions truly are: perhaps to reveal that we all daily “perform” our identities, that there is little difference between the violence of men with fists and guns and between men and women with intelligently shifting values? It’s hard to tell. And, by film’s end, it doesn’t seem to truly matter, since nearly everyone is living in another reality or are now or soon to be dead.
Surely, there is something fascinating here about various notions of “power” and their influence upon who we perceive ourselves to be. But then all of these folks can, by the last credit, only be perceived to have “been”—perhaps.