As some film writers have noted, Harold Lloyd’s 1920 film, An Eastern Westerner, directed by Hal Roach, is not his funniest, and, at moments, entirely loses its comic edge. But for me, that is just what makes this short so very interesting.
The film does have some extremely funny sets, including a long scene where, forced into a poker game, Lloyd, with a perfect hand, leaves the table briefly, using his time to create a mustache as he gets drinks for his fellow players, checking out their hands and he serves them, and, confident in his winning, puts in all his chips—only to discover that the crooked player next to him has switched hands. 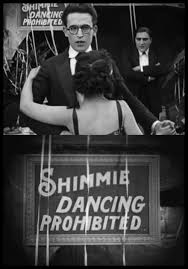 An early scene in New York, show Lloyd at a large dancing hall whose patrons are celebrating “700 cocktails before the probation hour.” The only thing that seems to be actually prohibited in this hall is “The Shimmie,” a dance with its close bodily contact was thought by many to be obscene, and was banned in many dance halls.  Warned several times for dancing “The Shimmie,” Lloyd seemingly cannot resist repeating the dance’s movements, often with the unintentional help of other patrons.
Some of this film’s Western chase scenes are as good as anything in Chaplin’s early films.
But some of the best humor comes from intertitle cards, written Frank Terry and H. M. Walker. Late to arrive home, Lloyd’s parents sit up waiting for him, the mother suggesting “Don’t be harsh on him dear. I’m sure he’s just at the Y-M-C-A”; the card provides her husband’s reply: “He may have started to the Y-M-C-A but they moved the building.”
When the evil cowboy bully, Tiger Lip Tompkins (Noah Young) is introduced, the intertitle describes his as having broken 8 of the 10 Commandments, and as having “twisted” the other two—which, obviously, forces us to reimagine those commandments to wonder which two he might wanted to “twist.”
But in this film there are even darker elements. First of all, our “hero,” such as he is, is not the middle-class achiever, who Lloyd plays in many of his roles, but a snobby rich boy who tries to get away with whatever he can—the very reason why his frustrated wealthy parents pack him off to his uncle’s ranch in the west.
We never meet the uncle nor have the opportunity to see the ranch. What we do encounter is a small Western village where “you’re not allowed to shoot a man twice on the very same day.” Not only does Tiger Lip Tompkins pile up the bodies in his free-wheeling bar, that appears more like a Berlin cabaret than a Western saloon; but he lusts after his newest employee, The Girl (Mildred Davis), who has only taken the job to help her dying father and her to survive. Tompkins locks away the old man until he will agree to give his daughter permission for him to deflower.


Of course, upon his arrival into this den of sin, The Boy (Lloyd) immediately falls in love with her as well; but he’s hardly a capable foil—at least at first—to Tompkins’ violent and gun-toting crowd. Throughout the film, Lloyd wears a suit and tie which, despite the dust, seems unfazed.
But even worse, when he finally does succeed in procuring the key to release The Girl’s father, Tompkins calls out what is described as “the Masked Angels,” a posse dressed in Klu Klux Klan-like masks that seems to include all Tompkins evil coven.
After escaping the evil “Angels” again and again, sometimes by using them as his own shield and, at other times, by diving into barrels, covering himself with sheets, etc., Lloyd manages to outwit the entire band, rushing after a train which he seeming catches. The Girl who has also chased after him, cannot get aboard, and, sadly, watches her only salvation speed off to his own survival.
But the final scene reveals that he has excited from the train from the other side and his awaiting her arrival. A bit like Chaplin’s tramp, The Boy and The Girl walk wearily, but deeply in love, down the railroad tracks.
Of course, we know that, when he and she finally find their way back East, they will be greeted with open arms and allowed a large inheritance. This time Lloyd’s extravagant antics have not been able to save him from himself.
And the myth of the two Americas, one a civilized, if slightly naughty world of wealth of privilege, the other of a wild, brutal and violent force that constantly needs to be contained, was repeated and extended even to comedy.