betting on laughter
by Douglas Messerli


With the end of the Ringling Brothers, Barnum and Bailey Circus, which recently gave its last performance, we might also report the end of the great clowns. Yes, the circus was very much about its animal acts—the tortured elephants, abused tigers and lions, and misused camels and llamas—but, as I remember it as a child,  it was also very centered on skits with clowns. I saw Emmett Kelly in the circus in the 1950s in Cedar Rapids, Iowa, and never forgot him, nor the numerous other silly beings who stuffed themselves into the little spaces of automobiles and other impossible containments. These beings were at the heart of the circus as much as the large parades of pachyderms and other bestial beings. James Stewart, if you recall, played just such a figure in the movie The Greatest Show on Earth.
Now, if we believe the news reports and other media items, clowns are dangerous beings who threaten women and young boys. Gone are the days, surely, of mimes (I might add, “thank heaven”) who crafted their art on the basis of clown figures. 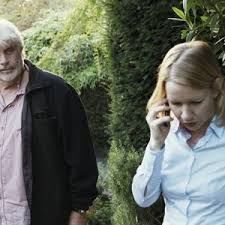 Ines Conradi’s (Sandra Hüller) father, in Maren Ade’s significant film of  2016, is a leftover clown named Winfried Conradi (Peter Simonischek), whose corny shenanigans, although tolerated by family members, are now very much out of favor. Clearly his clowning, his silly make-up and costumes that he has, for  years, used to help entertain his music students, has cost him his marriage and the love of his very serious businesswoman daughter, working as a consultant for an consultant firm in, of all places, Bucharest, in contemporary Romania.
More specifically, he is a kind of foolish Lear, still loving his Cordelia, but also determined to destroy her ordered life.
During a short visit to her mother back in Germany, in which Ines spends most of her time communicating by cell phone, Winfried leaves the birthday party early, returning to his beloved dog Willi, an aging friend who, soon after, dies. The beautiful scene in which the deaf dog cannot even be encouraged to return into the house, and in which Winfried sleeps outside with his lifetime friend, demonstrates something about love and commitment that his daughter will never quite comprehend.
Trickster, fool that he is, Winfried suddenly shows up in Bucharest, patiently waiting for his daughter in the lobby of her sleek office building for hours before she finally shows up, almost refusing to recognize him as he appears, monster-like gag teeth in place, on her periphery as she attempts to steer an entire corporation board to her office whom she is attempting to convince to allow her company to make a deal to restructure and outsource most of its employees.
Monster that Ines is, she nonetheless, has spotted her father and immediately dispenses her secretary to find him a hotel room and get him out of her way. Even then, she does not entirely succeed, and, somewhat explicably, invites him along to a party that evening at the British Embassy, where we hear the remnants of a speech about how the West intends to convert the leftover former Communist acolyte into a modernist industrialist paradise. If Ines simply sees the same task as part of her job and duty, the wiser Winfried sees it for what it is, and also, soon after, begins to see the destruction of his daughter’s well-being in the process.
If, superficially, Ines seems in control of nearly all situations, she, in fact, is extremely vulnerable on several fronts. Not only has she been kept on as a mere consultant, trapped in the outpost of Bucharest, but she faces sexist attitudes at all levels, and is expected even to keep the Romanian contingent at bay by continuing an affair with her “team” member Tim (Trystan Pütter). Moreover, despite her important negotiating role, she is also expected to take the would-be client’s wife, Tatjana (Hadewych Minis) on a shopping trip, even though she herself seldom “shops,” wearing a uniform of white blouses and black pants and waist-coats.


To add to her distress, she describes her own role to the executive’s possible competitors as “outsourcing”—a dangerous word in the market-sensitive environment; and her father, joking that he has purchased an alternative daughter, gaining some sympathy with her would-be client Henneberg (Michael Wittenborn). For Ines, things are clearly not going well.
When she finally completely dismisses her father, after having herself overslept an appointment with Henneberg, he apparently sloughs off to the airport, presumably to never be seen again.
But then, of course, Winfried is a fool, and returns, at a party she is having with her few women friends, as a new being with a ridiciulous wig and trick teeth, as “stranger,” Toni Erdmann, a man who seems to various contradictory beings. For her friends, he is a consultant, a coach. For others he becomes the German Ambassador. For still others he is a close acquaintance of Henneberg and, even more dangerously, a friend of the company executive which Henneberg represents, Ileiscu (Vlad Ivanov).
Strangely, no matter how perverse his looks and obvious lies, he seems to make friends of everyone who Ines rubs wrong. Although many of this film’s  scenes are set in the wealthy enclaves of contemporary Romania, a trip to  Iliescu’s actual oil fields, reveals just how devastated is both the land and the workers. But even here, the absurd Erdmann makes friends, despite getting one man fired with a joke. When he has to urinate, however, another worker gently leads him to his poor home, making a friendship that shows us just how aloof his daughter has been from all living beings.
Attending a party to which he has been invited by a woman Erdmann has met at one of his evenings out, he demands his daughter sing, to his piano accompaniment, Whitney Houston's "Greatest Love of All,” a celebratory song for the guests. Ines, who obviously has sung the song as a child in his own household, sings with great aplomb—if not in perfect key. The performance reminds me a bit of the father and son duo in the Dardenne Brothers’ La Promesse, where the singing is a true horror, but so beautiful that you want to cry. I did cry.


Ines runs away in terror, realizing that she has committed to hold a party in her own apartment to “reunite” the Romanians with the German-American “team.” In what only can be described as a kind of mental breakdown, Ines, unable, given the tightness of new dress, to even put on her unmatched shoes, strips off everything, appearing at the door naked to tell her guests, one by one, that the party is to be a naked one: if they do not want to strip, they simply must leave. The first several guests turn away, disgusted. But some arrive nude, after they have been telephoned about the new requirements, and others return, all quite embarrassed about the circumstances. Soon, all have, at least, put on simple garments, even Ines finally appearing in a bathrobe. One guest, however, dressed fully in a Bulgarian kukeri costume, looking like a large furry bear who, if petted, is seen as a sign of good luck, arrives—obviously Ines’ trickster father, playing one last awful joke.
Even though he leaves soon after, Ines follows, observing that, once again, his very presence draws people, particularly children, to him. And in further evidence of her breakdown, hugs him close to her, finally accepting his ridiculousness.


The final scene, where Ines arrives for Winfried’s mother’s death, hints at major changes in her life. She has left her for company and gone to work for  another company in Singapore. And in a beautiful kind of semi-reconciliation, she puts on his terrible teeth and wears one of her grandmother’s ridiculous hats, looking for a moment as silly as her father has throughout. Winfried runs to get the camera, but the moment is lost, as Ines takes out the teeth and tosses the hat away; the gesture is everything. Finally, she has recognized the importance of his “foolishness.”
Many critics describe this film as a “comedy,” but even the director could not quite comprehend what they meant. “It isn't a comedy – I'm not really sure why people think it is."
I’d argue that if you can comprehend A Streetcar Named Desire or Who’s Afraid of Virginia Woolf? as strange comic works (Williams is rumored to have laughed throughout his play’s premier performance, mostly at the exaggerations of his character Stella and Stanley’s proclamations),  you might be able to see Toni Erdmann through the same lens.
I’d argue that all of these are odd kinds of comedies, exaggerated views of family life that reveal the absurdities of that institution. But maybe we’re safer simply describing this nearly 3-hour film as a fascinating investigation into what it really means to live a life with laughter and joy. Winfried/Erdmann is, indeed, often quite humorous, but he is also a desperate man trying to redeem his seriously lost daughter. Both he and his daughter represent extremes, and he has little choice but to play out his absurd visions against his daughter’s own lost sense of humor about living. I’m not sure Ines can ever truly regain her sense of balance, but, at least, by film’s end, she momentarily takes up the costume and tries becoming a momentary clown.