the lost christians
by Douglas Messerli

In hindsight, it seems to me that the Academy Awards should be highly embarrassed for not including Martin Scorsese’s Silence in its nominations for best film and director. If La-La Land was an enjoyable lark, Manchester-by-the-Sea a dark signature piece for its actor, and the winner, Moonlight, an impressive indie work that deserved to be lauded, Silence—despite its length and often too languorous pacing—is the better of those movies, and certainly the most profound, given its broader issues of faith and doubt. While the three nominees I mentioned dealt primarily with individual issues, Silence is concerned with broader cultural and even universal concerns. Despite the often heavy-handedness of Scorsese’s script—something that might also be said about Moonlight—the film was simply better, particularly in its cinematography by Rodrigo Prieto. 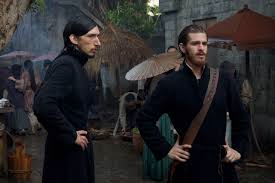 The story is a fairly simple one. After a Dutch trader delivers a message to a Jesuit mission in Macau that their founder and mentor, Father Cristóvão Ferreira (Liam Neeson), has become an apostate in Japan, two of his students, Sebastião Rodrigues (Andrew Garfield) and  Francisco Garupe (Adam Driver), determine to go on search for him, refusing to believe the accusation. Given permission for the journey by Father Alessandro Valignano (Ciarán Hinds) and with an alcoholic Japanese guide, Kichijiro (Yōsuke Kubozuka), they set to sea.


After a long and difficult voyage, the three arrive at the island village of Tomogi, where they discover an ardent group of Christians, struggling simply to survive, gathered u nderground, much as the earliest Christians were forced into hiding. When their very presence threatens the small community, Rodrigues moves on to another village, on Gotō Island, and returns to Tomogi to tell Garupe. To protect the villagers from certain destruction by the shogunate, they travel in different directions, Rodrigues returning to Gotō to find it totally destroyed.
There he again encounters Kichijiro, who admits that is an apostate Christian and demands confession from the priest. Rodrigues hears his confession, but soon after finds that his “friend” has betrayed him to the authorities for 300 silver pieces, obviously calling up the betrayal of Christ by Judas.
Now in jail, Rodrigues ponders God’s immense silence while the priest is forced to observe various methods of death imposed upon those who refuse to step on a small carving of Christ, fumi-e, representing their abandonment of their beliefs.
Those who refuse are put upon crosses set into the beach, which, when the tide returns, forces them to drown. Others are burned alive. Many do step onto fumi-e, but even some of these apostates are threatened by further torture unless Rodrigues, himself, becomes an apostate.


Finally demanding to see Governor Inoue Masashige (Issey Ogata), he discovers that the old man to who he been speaking throughout his ordeal is the “the inquisitor” himself.
To further break him down, Masashige requires him to watch the arrival of a boat with apostates and Father Garupe. As the apostates are, one by one, drowned, Garupe tries to swim out to save them, only to be drowned himself.


Finally, Cristóvão Ferreira pays a visit to the imprisoned Rodrigues, admitting not only that he is, in fact, an apostate, but that he married and has become a Japanese scholar, believing that Christianity is a lost cause in Japan and that finding god may be better served by giving up the cause to convert its citizens.
We have already perceived in many of the notions of the Japanese Christians that not all of them have truly assimilated the Western-based ideas of Christianity; one believes that the very baptism of her child puts her already in “paradise.” Others have difficulty in even saying the word “Jesus,” and many have blended Buddhist and Christian ideas. Rodrigues, it is clear, must come to terms with just what conversion truly means. Is it worth all these individual’s lives, no matter how determined they have become to maintain their religious viewpoints? Is religion a matter of rigidity to its doctrines, or can God forgive even denial if it is done for the good and survival of others?


These are towering questions which have long been at the center of religious exploration. Surely this Japanese inquisition might be compared with the Spanish Inquisition. Wasn’t this same intolerance behind the Holocaust? Today’s ISIS soldiers demand a rigid view of Islam that is, often, at odds with general Islamic beliefs. And most of us can easily name numerous modern countries: Turkey, Iraq, Egypt, Myanmar, and, yes, even the US, among them, where minority believers are outlawed, threatened, or simply in danger for their survival.
Forced to make a decision, Rodrigues steps onto the fumi-e with what he imagines is God’s approval, joining Ferreira to become a student of Japan rather than an intruder determined to change it.  If these men might be described, along with all others killed and apostate, as “lost Christians,” perhaps by living they can find in themselves a belief that is more inclusive.


The wonderful thing about Scorsese’s film is that it provides no easy answers, but simply asks all the right questions. And it in largest philosophical ramifications, Silence even explores what it means to be “found” and “lost.”
As I have made quite clear in the pages of this volume, I am no longer a believer in any religion. But this film moved me to question the issues of belief itself fully. In a year devoted to just that question, and during a time in which shouting would-authoritarians demand belief under their terms only, Scorsese has chosen to return to a work that simply asks us to think and to imagine, to believe only what we can.