illusion and reality
by Douglas Messerli

Orson Welles’ very last feature film, F for Fake, is a highly puzzling movie, or, as some critics have described it, “cinematic essay.”
In this work the great white and food connoisseur, Welles, turns his focus first on the art world, filming, for producer François Reichenbach, a story about the noted art forger Elmyr de  Hory, a Hungarian-born painter, who started out in the US forging works by Matisse, Modigliani, Picasso and others just to make a living, but over the years forged hundreds of such works, selling them to noted gallerists and passing them off as the real thing to numerous art “experts.” 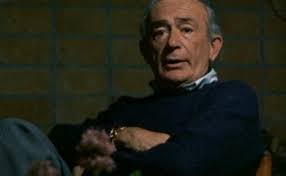 Welles and his crew seemingly present the now-open forger in his villa on the island of  Ibiza, where he seems to be hosting a large party with a dazzling contingent of “the beautiful people” of the 1970s, including Welles himself and Welles sexy woman friend, Oja Kodar.
At this party, we are also introduced to de Hory’s biographer, who has recently “revealed” his subject’s forgeries, Clifford Irving. Of course, Irving, we now know—which gradually comes to light as the movie proceeds—has accomplished his own notable forgery, a so-called “autobiography” by Howard Hughes, in which he and his co-writer Richard Suskind, along with Irving’s then-wife, Edith, had  forged Hughes’ handwriting in numerous letters and his signature on the contract with McGraw-Hill publishers.
Welles even admits to his own “forgeries,” his lies, early in career, that he had done notable acting, and his own “public hoax,” broadcast over the radio waves of War of the Worlds, which caused general panic throughout the US. As if to add to his theory of forgeries, the director creates a poorly filmed version of the production which, of course, never previously existed. And throughout, F for Fake presents the unknowing audience with images of his two central figures, often appearing to be conversation at the same moment, but actually filmed at different events.
As if to further establish a series of amazing coincidences, Welles offers up the story that his great Citizen Kane began as the story that was originally to have been a history of Hughes. And he ends his film with another totally “fake” story (but after the promised deadline of one hour of complete honesty) in which he describes Kodar as traveling for vacation to Picasso’s Spanish home. Intrigued by the beauty of Kodar, the great artist finally meets her and paints several paintings, which he gives her outright as a present.
But when he hears of Kodar’s intent to show and sell them in France, the artist flies to the gallery, whereupon he discovers them all to be forgeries, painted by Kodar’s grandfather. This story, Welles admits, is another forgery, a made up tale, but admits that this tale (made up by Kodar herself) proves his point: art is always a kind of grand lie.
Throughout the work, Welles punches at the supposed art authorities and at art gallerists  willing to turn a blind eye in their search for money. Although de Hory’s “fakes” made millions, he himself saw little of those monies, and even his Ibiza villa, is owned, so we discover, by an art dealer. De Hory claims he has never posted a single name to his hoaxes, although he quickly proves he might have been capable of it by penning Welles’ own signature to a piece of art.
In the end, however, Welles grand pronouncements seem hallow, since he seems, himself, involved in a grand conspiracy of sorts, however charming it might be. And he fails to make clear that there are punishments for de Hory’s and Iving’s behaviors: just prior to this film de Hory had spent two years in prison (for homosexuality, however, not because of his forgeries), and after the filming of Welles’ work committed suicide when it appeared he might be extradited to France. Irving and his co-conspirators all spent time in prison. And in his last years—despite the obvious gifts of this “illusionist”—Welles could no longer find funding for any of his projects, producers simply not trusting his abilities to finish his projects or demanding outrageous amounts of money.
We can only wonder whether Welles is speaking for or against authenticity,  however tenuous that concept may always be. His false analogy that the magnificent cathedral at Chartres was created by men whose names we never knew, seems pointless given Welles’ own grand ego, performing many of his scenes is a full cape and hat, as if even a simple coat might diminish his significance.

It’s true that these topics are quite fascinating, particularly given our current sense of living in a time without “truth,” and the fact that many New York galleries have recently been accused of selling just such forgeries. But I’m not sure, other that its cursory criticism of the art world, that Welles’ essay actually offers answers for the problem, or that Welles is even recognizing the “hoax” as being a problem.