Although beautifully filmed and lovingly acted, Julieta is a strange film for the often transgressive, gay Spanish director, Pedro Almodóvar. I suppose its subtle lesbian themes might have attracted him, by the three Alice Munro stories upon which this film is based, are intense realist investigations into personal guilt and religious angst that seem at odds with Almodóvar’s aesthetic, and turn his film into a personal psychological melodrama that, frankly, drag his movie into a series of ruminations that not only freeze his central character, Julieta Acros (played by Emma Suárez, as the older incarnation, and by Adriana Ugate as the younger version) into a repetitious and, often, inexplicable, angst-ridden positions. 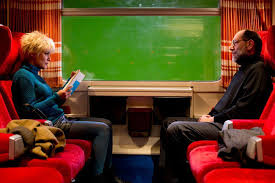 While it is true that many of Almodóvar’s characters live, so to speak, “on the edge” (how about the numerous figures of Women on the Verge of a Nervous Breakdown, or the terrorized imprisoned and even tortured characters of Tie Me Up! Tie Me Down! and The Skin I Live In, the highly threatened women of Volver and All About My Mother, or the terrified male children (who have never grown up) of Bad Education and I’m So Excited. But in each of these films, the characters either embraced their own kind of insanities or marvelously played out their delightful lunacies to the world, re-making the planet we know it and invoking the films’ audiences to join in their madness.
Julieta is not mad. She is not even delightful, despite Ugate’s youthful appeal. She is simply depressed, downed, all too predictably, by the years of her husband’s extramarital  affairs with her best friend Ava (Inma Cuesta)—something that might never have troubled any of Almodóvar’s previous figures—and her own sense of not having acted responsibly responding to a train-ride intruder, who, it appears, in deep depression, simply wanted to talk. If she were even a Hitchcock woman, so the play seems to suggest, she might have invited him into her train carriage for the night and given him comfort—as she later does to the far cuter Xoan (Daniel Grao), the fisherman who becomes her husband.


So what if that stranger soon after exits the train to allow himself to be run over and killed? Julieta, it appears, unlike any other Almodóvar character, is doomed by guilt from the start. This isn’t the Spanish director, obviously, but the dour Canadian realist, Munro speaking.
And why, one has to ask—since the director never does—does this intelligent teacher of the classics, who can make Homer attractive to even high school level students, let herself get  swept off her feet (yes, these are the clichés that cling to Almodóvar’s “weepy”) by a simple fisherman, seemingly living way beyond his means in a coastal Spanish town in a house, run, incidentally, by a mean-spirited, gossipy local woman who seems a cousin to Hitchcock’s Rebecca’s nasty Mrs. Danvers? If nothing else, this perversely guilty character has made some very bad decisions.


Even if things appear to go well, particularly with the birth of their child, Antía (also a duo role, shared by Priscilla Delgado and Blanca Parés), the beloved girl seems closer to her father, just as Julieta sinks further into her guilt-ridden world after visiting her mother, suffering apparently in the last stages of Alzheimer’s Disease, who discovers that her father has taken up a not so secret affair with their maid. Never before has a Almodóvar character been so completely swept into moral outrage of sexual peccadilloes. Even her father warns her to accept the realities of life.
And that, in sum, is the real problem with poor Julieta. She is a bourgeois moralist in a world which simply doesn’t subscribe to her own sense of Puritan (read Munro) values. Even when she has finally established a lovely elderly relationship with the ever-patient—if slightly  intrusive Lorenzo Gentile (Darío Grandinetti)—after Julieta meets, quite by accident, her daughter’s childhood friend, Beatriz (Michelle Jenner)—she cuts him off, destroying any possible happiness left to her, all because her daughter has now refused to communicate with her for over 12 years.
I suppose one might think of this film as a kind of mystery, forcing us to wonder why has her daughter behaved in such an egregious manner. Is there something—as Gentile himself asks—so terrible that we dare not talk about it?
After more than hour and 20 minutes, we finally come to realize that, no, there is nothing more. Only the nasty insinuations by their former servant of Ava’s and Julieta’s relationships to  Xoan, and Xoan’s own stubborn and stupid determination, after Julieta confronts him about his continued sexual relationship with Ava, to go out fishing on a day of terrible storms, during which he was killed.


The problem is not that of Julieta or Xoan, nor even the stupid, gossipy servant, but the daughter, who, even more guilt-ridden (read distressed denier of truth) daughter, who, after seeking help in a “spiritual retreat” in the Pyrenes, simply retreats from the world, later marrying a man we never meet with whom she births three children. We can only wonder what her life might be with the unknown husband who keeps her so “plentifully” pregnant. She now apparently lives, so her friend Beatriz discovers, near the wealthy Italian-Swiss city of Como.
Late in the movie, through another revelation of Beatriz, we discover that her and Antía’s relationship had been a lesbian one, and that she, too, had been completely dismissed from her former lover’s life. What Munro’s / now Almodóvar’s story seems to suggest is that the so-called “spiritual retreat” hints of at a kind of “conversion therapy,” which led the young girl to not only deny any relationship with her mother but to closet herself off from her own previous sexual life.
In a kind of “deus ex machina” ending, Julieta receives a letter from her long lost daughter, and, since she has provided a return address for the first time, the mother travels with Gentile, with whom she has now reestablished a relationship (thank heaven, of course), to Switzerland to see Antía, without knowing what might happen, determined, yet again, to not bring up the so silent past. We’re never given a clue, and we can never know what might happen. But, frankly, do we care? The daughter, after all, even though she has suffered her own son’s death (so we are told), has denied her very existence. So what can that outcome really be? This daughter is not a character I admire, nor, I would argue, does Almodóvar. But then, I don’t have a daughter, nor does he. Maybe I’m just being unjustly skeptical of a perfectly happy ending.
O Pedro, please come home. Straight shtick is not really, I feel, what you were meant to do. The absolutely closeted daughter, Antía, I’d argue, is not really worthy of our attention. How I longed that you might track down Beatriz in her role as a reporter for Vogue, with all of her gay and transgender friends.
Did I mention that this movie is very sweet--something I might have never said of any previous Almodóvar movie?