Claude Chabrol and Pierre Leccia (screenplay, based on the novel by Ruth Rendell), Claude Chabrol (director) La Demoiselle d'honneur (The Bridesmaid) / 2004, USA 2006
Although many critics have argued for a significant difference between Claude Chabrol’s early and later films, arguing that his later works seem far more commercial than his earlier, more loosely structured, works, generally perceived as being linked to the French “new wave,” I’d  argue, along with others, that the continuity of his films is quite obvious. His later works retain the dark vision and quirky plot shifts (Chabrol films seldom follow the usual notions of cinematic narrative, relying on psychological motivation rather than organized storytelling) of his earliest films. 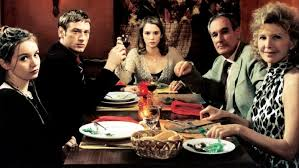 There is no doubt, clearly, that a late work such as his 2004 The Bridesmaid, is perhaps a bit less ghoulish than his 1970 masterwork Le Boucher, and he is obviously more forgiving of the inexperienced mother’s boy, Philippe Tardieu (Benoît Magimel) than he might have been of some of his former unintentional villains; but Tardieu is no less a dark victim than the central figure, for example, of Adrian Lyne’s 1987 film, Fatal Attraction. Except Philippe is not cheating on another woman, other than, perhaps, for his over-attentive mother, Christine (Aurore Clément), who herself has just been jilted by a suave liar—who might be perceived as another kind of “fatal attraction”—Gérard Courtois (Bernard Le Coq).


Philippe is not as much a mother’s boy—he is attracted to women and has had various relationships—than he is an overachieving caretaker for his entire family, which also includes  his two sisters, Sophie (Solène Bouton), soon to be married, and the troubled, drug-involved Patrica (Anna Mihalcea). Philippe has a good job, and is soon to become a partner to his current boss in a company that sells plumbing rehabs, mostly to elderly women—a job to which Philippe, given his gentle ministrations to his mother, seems perfectly suited, smoothing over the curmudgeonly complaints of his company’s elderly clients. Indeed, Philippe is what most mothers might describe as a nearly “perfect son,” allowing her and her girls to live a far better life than they might have been able to on her hairdresser’s income.


As some film historians have stressed, it is a seemingly well-adjusted family, behind whose smiles they keep dark secrets that we gradually perceive, in Chabrol’s usual investigation into family relationships, as a series of deep problems that never truly come to the surface except at film’s end.


We suspect, for example, that although Sophie may find temporary happiness with her seemingly simple-minded groom, she will not be able to transform it into the happy marriage she seeks; Patricia, as I have already mentioned, is a troubled adolescent, and near the end of the film is arrested for a robbery to help her maintain her drug habit.


Philippe’s psychological downfall is far more complex. What begins as a quick obsession of Sophie’s husband’s cousin, Stéphanie “Senta” Bellange (Laura Smet), after the two meet, fall in  love, and consummate their relationship on the very day of Sophie’s wedding, quickly becomes a passion that cannot be quelled. Philippe, spending longer and longer periods in Senta’s inherited mansion, where she lives in the basement with an impossible and comically realized tango-crazed step-mother inhabiting the upper rooms, as he checks in with his employer in brief cell-phone conversations. He no longer shows up for family dinners, and  can hardly be expected to help with his younger sister’s increasing problems.


Senta, the name this clearly crazed woman has given to herself, seems to perceive Philippe as the man of her dreams, the one for who she has been waiting for all of her life. And to prove his love she begins to demand outrageously absurd actions, which, at first, he simply shakes off as a joke—particularly since so many of her stories about her career as an actor (not “actress” designation for her!), which seems to constantly be shifting, as she disappears for long periods to Paris, evidently auditioning for further parts.


Philippe, clearly, is out of his league, having never before encountered such a complex figure. At moments, the innocent boy-man does not know whether to laugh at her narratives or simply slough them off her over-active imagination. Yet, without his really knowing it, he has become obsessed with her, and as he gradually begins to perceive that her demand that they each kill another being in order prove their love, is a real demand, and not simply a absurd metaphor, he pretends he has murdered a tramp who has been camping on her lawn, particularly after reading in the newspapers that just such a figure has recently been found dead.


Senta, believing his act is real, plots her own “murder,” reporting back that she has found Courtois, the man who has disappeared from her lover’s mother’s life, and stabbed him to death while he was out jogging.


If, at first he again doubts her veracity, he is still determined to check the facts, visiting Courtois’ new estate, to find the man well and alive, a dog barking outside his home (despite the fact that his mother has long ago suggested Courtois does not like dogs).


It is a clue, of course, that most of the audience easily misses. As we discover from the police, after Patricia is arrested, and during the same events Philippe is questioned about why he has visited Courtois the very day he has found a guest’s body nearby, stabbed to death, Senta has indeed accomplished her murder, only delivering death to the wrong man.


Despite all he now knows, Philippe still returns to Senta’s basement hovel, reassuring her that he will never leave her even as the police are now peeking into her basement windows, obviously having now traced the murder to her through Philippe.


What also perceive in Philippe’s gentle strokes of her forehead is that she has become a kind of stone figure, the same kind of figure that his mother (who is said to look like the statue) has given Courtois early in the film, and which Philippe has later stolen back and hidden away in his closet. Throughout Chabrol’s somewhat macabre film, the handsome boy takes it out, stroking it, and even sleeping beside it. Now that Senta has become that stone sculpture he is strangely at peace, offering her a protection that he obviously cannot ever provide, an Orpheus to an Eurydice who has just turned to look back.