a wilde beating
by Douglas Messerli

I generally have enjoyed Alexander Korda’s stylish comedies, and I’ve always enjoyed the plays of Oscar Wilde, so it was with expected pleasure that I determined yesterday to watch Korda’s version of Wilde’s An Ideal Husband. In the first few moments, I was enchanted by Glynis Johns’ (playing Mabel Chiltern) witty rejoinders about what she wanted in a husband and life (“But, I love London society. I think it immensely improved. It is now entirely composed of beautiful idiots and brilliant lunatics. Just what society should be!”); but I soon began to think that perhaps I had clicked on the wrong Filmstruck movie, as things quickly turned more serious and ponderous than I had imagined a Wilde play to have been. 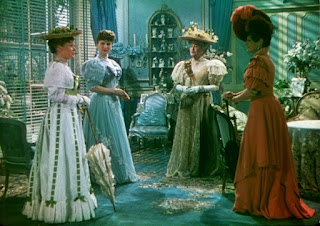 Well, things are somewhat serious for Sir Robert Chiltern (Hugh Williams), who as a young man, evidently, had passed on secret government information to his one-time mentor, resulting in a large profit for his friend and significant payment for himself, which established his now quite polished and pristine career as well as the mansion in which he and his “saintly” wife, Lady Chiltern (Diana Wynyarad), now live and in which they are currently celebrating a large dinner party.


To that party, unexpectedly, Mrs. Cheveley (Paulette Goddard) arrives, being reminded by the hostess that they attended school together; Lady Chiltern has bitter memories about her beautifully dressed attendee, recalling that Cheveley had been dismissed from school, something that the pious Ladyship can ever forget. Cheveley is there for one purpose only: to blackmail Sir Robert into changing his mind about a vague—and evidently corrupt—proposal to create a canal in Argentina.


The very idea that anyone might imagine the need for a major canal so far south in Western Hemisphere and which, presumably would have to also slice through Chile, is worthy of the best of Wildean wit. But in Korda’s version everything is taken so utterly seriously that any possible humor has been drained, and even the ludicrous project is represented as something worthy of further study.


Sir Robert is not presented simply a youthful sinner (he was only 22 at the time of the letter i n Mrs. Cheveley’s possession)—in short, a not so “ideal" husband—but as a smug adult determined to maintain his unblemished position at all cost. His wife is just the kind of saintly prig that women of the world like Mrs. Cheveley love to hate; but even the vixen of Wilde’s play comes off as a sinister whore instead of the worldly “do-badder” than I am sure he intended her to have been. Other than she has invested in the project, we can perceive absolutely no reason, other than revenge, for her blackmail; certainly, as she proclaims, she has all the money she might possibly need for life.


In Wilde’s original, I presume, she was a kind of—as Hitchcock describes it—“macguffin,” a person or object that keeps the plot going. But here, everything turns quite serious and dark—wit, evidently, having been by Korda banned on the set.


Even Wilde’s usually “gay” bachelor, Lord Goring (Michael Wilding) takes his role so seriously that you might actually suspect that he is truly in love with Lady Chiltern, instead of her empty-minded sister-in-law. And when Lady Chiltern determines to seek out his help in her husband’s crisis, we, a bit like Mrs. Cheveley actually do suspect that “something’s up,” particularly when she cancels her visit for little apparent reason than it may have been intemperate.


The trouble is with this leaden version of a comic mix-up of character and events is that nothing is up. And poor Mabel is left to spout her comic lines of lovers and husbands all alone, with no one left in the room to even wink. I was sure that, at any moment, both the elder Chiltern’s might break into tears.


In the end, Korda’s Wilde is so unmemorable that I was startled to see that I had checked off the title in my Time Out Film Guide, an indication that I have seen a movie at least once. I had totally forgotten it. And I had to write this piece early the next morning before I might succeed in forgetting it once again.


Cecil Beaton’s costumes are stunningly beautiful, appropriately draping the evil blackmailer in emerald green, while embalming the Chilterns in black and blue as if they have both been just beaten up. Vincent Korda’s sets are very well done. If only the human beings might have come alive on the set, everything would have been just swell. As it is, Wilde plays here more like John Galsworthy.