room to room
by Douglas Messerli

William A. Drake and Edmund Golding [uncredited] (based on Drake’s play, adapted, in turn on the novel by Vicki Baum) (writers), Edmund Goulding (director) Grand Hotel / 1932

Although directed by the stolid Hollywood craftsman, Edmund Goulding, who from 1925 to 1958 worked with many of the most notable actresses and actors of the time (Greta Garbo, Bette Davis, Tyrone Power, and even the Marx Brothers in A Night at the Opera), the portmanteau drama, Grand Hotel, was truly the work of Irving Thalberg, who not only brought up the rights but whose MGM backed the play on stage before determining to film it. Shot on a budget of $700,000, the film was one of the most successful works of the period and his been beloved for generations after, despite the fact that the puzzle box of often conflicting stories reveals it to be actually little more than a thread on which to hang a series of star-leaden monologues. 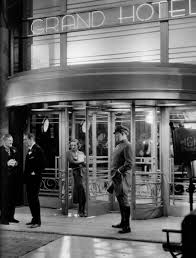 But then this film did have stars, and used them to great advantage. As a jewel-thief, Baron Felix von Geigern (John Barrymore) gets the opportunity to actually have conversation with most of the films’ characters; and stenographer, Flaemmchen (Joan Crawford) also meets at least three of them. The dying accountant, Otto Krigelein (Lionel Barrymore), who plans to use up his entire savings just to stay in the luxury of Berlin’s Grand Hotel, has worked most of his life for self-centered General Director Preysing (Wallace Beery), and becomes friends with both the Baron and Flaemmchen, with whom this meek man walks away to new life in Paris. Poor, suffering Grusinskaya (Greta Garbo) an aging ballerina who famously wants to be alone (“I want to be alone”) gets that opportunity by encountering only one of the major players, her would-be lover/and might-have-been robber, the Baron.
In between is a cast of hundreds who, as Dr. Otternschlag (Lewis Stone) notes “come and go” without anything happening.


Of course, between these others a great deal does happen. Preysing fails to make a deal that might save his failing company, attempts to buy a relationship with Flaemmchen, and, finally, kills off the work’s “hero,” if a hotel theif—even as nicely mannered and basically principled as the baron is—might be described as a hero.
While apparently in the past the Baron has been very successful in his hotel heists, this time he is thwarted—by love—in stealing Grusinskaya’s pearls and is not allowed to pocket—by friendship and conscience—Kringelein’s fully stuffed billfold. Without money, he cannot pay off the thugs for whom he works and, accordingly, cannot run away to a better life with the Russian dancer. It short he is doomed everywhere he tries to turn, so it is not surprising that the writers killed him off.


The poverty-stricken Flaemmchen falls in love with the Baron, takes up Presysing’s offer for a more intimate relationship, and runs away with Krigelein.
The dying Krigelein, meanwhile, comes to life, learning how to dance, gamble, drink, and love for the first time in his life.
Even the hotel porter, Senf (Jean Hersholt) finally becomes a father to a new-born son, his wife in labor throughout all the events recounted above.
Only to the disfigured doctor does “nothing” happen, an irony that surely delighted, as it still does, the film’s admirers.
Looking back at this grand war horse now, it’s hard not to be an admirer of the truly remarkable set, particularly when the cameras flit across the bustling hotel lobby, or when they peer down upon the cascade of circular staircases that take us down into that lobby once again. The rooms, shot almost as if the film were a noir, are not elegant places but rather cramped spaces with dark-goings on: drunken sleep, shady and ecstatic sex, robbery, intended suicide, and murder. Outside, the grand hotel is precisely that, “quite grand.” but inside it is a pretty dreary place for those “who want to be alone.” And the movie, despite its veneer of glamour, is, given the hours it spends inside each of these different character’s trajectories, often simply depresses one. In the end, we perceive Grand Hotel not so much as a coherent movie, than as a series of extended vignettes, each tuned to the various actors’ talents, none of them quite cohering.


We’d later see this style of filmmaking soon after in Dinner at Eight and in the dozens of star-leaden but mediocre hotel, airport, and disaster films of the 1960s and 1970s (Airport, The Towering Inferno, etc.), as well as the satires of the same genre such as Airplane!


But then Grand Hotel was one of the first and finest. It won as Oscar for the Best Film of 1932 (without garnering a single other nomination), and has been enshrined in The National Registry. So why complain?
As the TV broadcaster of Billy Wilder’s The Apartment puts it, “sit back and relax as we now present Grand Hotel.” The only trouble, Jack Lemmon finds, is that the movie, given all the ads surrounding it, will not be broadcast during the meal he hopes to eat while watching it. Somewhere, there’s a kind of metaphor in that fact: the grand banquet the movie seems to offer up doesn’t quite ever delivered, and we’re left—despite our expectations—still a bit hungry.