softening the leather
by Douglas Messerli


A longtime favorite among movie-going audiences, David Lean’s Hobson’s Choice has not particularly aged well. This 1954 film seems a bit like it was made in the 1930s and even, had film been available, in the 19th century, with its picaresque views of Lancashire. 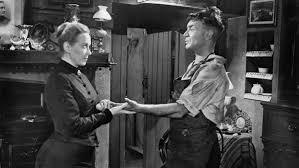 As usual Charles Laughton chews the furniture in his booming harangues against his three daughters and his drunken muggings—with apologies to both the moon and door revealing his sentimentality beneath his gruff exterior. And, although Brenda De Banzie plays his spinster-deemed daughter, Maggie, quite authoritatively, and John Mills handsomely mopes around in his role as her self-determined groom, each of the actors can’t quite escape the types which she and he have been assigned; De Banzie is bit shriller, equally head-strung Deborah Kerr, and Mills (as Will Mossop) only at the very end is allowed to escape his hound-dog, “aw-shucks” characterization. 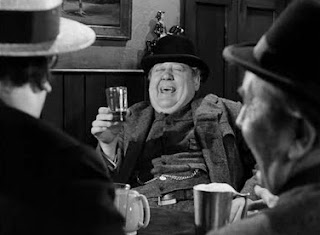 After many years of thinking of Maggie’s actions as a restorative, almost feminist-like act, which, furthermore, permits her other two sister to marry as well, I felt this time around that her and Will’s creation of a competitive boot shop just around the corner from her father’s as issuing as much from revenge as an attempt to temporarily convince him of his own misogynist ways. In fact, despite his assertion of male domination, it is clear that his daughters have always ruled his shop; the only superiority that he has ever had exists only in the Moonracker bar where he brags to his friends. Just like the moon which he chases through the puddles, his dreams of patriarchal rule are permitted only when, in his drunken stupors, he climbs to the top of the imaginary mast, the moonracker of ships.


Yet the real problem of this film, I perceived this time through, is that none of the film’s characters is really likeable. Hobson is, after all, simply a drunk with imaginary claims; we seem him in a constant motion between the bar and bed. Without his daughters, it is hard to even imagine how the shop might still survive. And it is difficult to even figure out how he got into the business in the first place.


Alice and Vicky (Daphne Anderson and Prunella Scales), his younger daughters, seem selfish and as indolent—if it were to be allowed—as their father. And the young men to whom they have attached themselves, Freddy Beenstock and Albert Prosser, are as foolish as their names suggest, men will quickly grow into boring businessmen who someday will also sneak off to the Moonracker, or in Freddy’s case, watch those who do sneak off with prurient dis-ease.


The strong-willed and fairly likeable elder daughter, Maggie is, as her father proclaims, a bit like the leather her would-be lover crafts into beautiful boots and shoes. Even after she determines to marry, she remains so stiff-necked that we can hardly believe that upon her wedding night she has successfully given up her virginity to the evidently-pleased Will. If we’re all happy that she “gets her way,” it appears her way is as harsh as a missionary lecturing the local natives. Even when she defers to her new “master,” we know that it is simply a ruse to keep her husband on his leash.


The most likeable figure in the film, Will, is truly a dolt. He seems perfectly willing to give away his life to a woman who lives with her mother more like an uneducated whore than the beauty he imagines her to be. Moreover, although he appears to be meek and modest, it is clear that he is also as vain as any of us, a quality that Maggie plays to in praising his boot-making skills so that she might charm him into marriage. And what, one wonders, other than their collective leather and management talents they bring to the world, might the two ever do in their off hours? Certainly Maggie will never let Will sneak off to the local pub, nor allow herself much but the hard work she already committed to for 30 years; perhaps a Sunday walk in the park—of course, after church. Will, after she has taught him better how to read, will pick up the newspaper and learn about the life he has never had. The best we can say of their relationship is that perhaps Will may work to soften and shape her leather as well.


I will always think of British director David Lean as a kind of smarter, but just as corny and sentimental director as the American Frank Capra. Is it any wonder that this film’s hero, Hobson, winds up deep crib of corn?


If Capra knew a good story when he saw it, Lean had an equally keen eye for images and a marvelous skill to edit them. The joy of this film is not so much in its characters as it is in Lean’s ability to whip up atmosphere: the wailing storm of the first scene (as in his Dickens films) as the camera sweeps in upon a creaking boot advertising what lies within the shop and then roves across the rows of boots, slippers, and clogs for sale which lay at the center of his tale. As Laughton waddles down the street on his way to his favorite bar, you could swear you were in Salford one early morning in the 1880s.


Yet Lean’s tales, at heart, are as quintessentially stock British as Capra’s are stereotypically American. And there is always in Lean’s films a sense that the story (new or old) is being told by a tired Oxford lecturer reciting British history. Heterosexual love in Lean’s films (particularly in his supposed love story, Brief Encounter) is always a kind of transaction, and in his later, epic works he almost abandoned the subject, except through the pop-like refrains of Doctor Zhivago’s “Somewhere My Love.”