Justin Kelly | I Am Michael; and Benjie Nycum and Daniel Wilner | Michael Lost and Found

Justin Kelly and Stacey Miller (screenplay, based on the essay by Benoit Denizet-Lewis) Justin Kelly (director) I Am Michael / 2015
Benjie Nycum and Daniel Wilner (directors) Michael Lost and Found / 2017

After watching, quite by accident, Ben Nycum’s short documentary, Michael Lost and Found (2017), I read the essay, first published in 2011 by The New York Times Magazine, “My Ex-Gay Friend” by Benoit Denizet-Lewis, following that up with the Justin Kelly-directed film  based on the essay, I Am Michael, that appeared in 2015. Although the reviews of the longer film were often negative, and Nycum’s documentary was filmed, in part, to counteract its vision of his lover, Michael Glatze’s, transformation from gay activist to conservative Christian minister, I think that, perhaps, my order of viewing and reading these works allowed me a more tolerant view of all three, and certainly gave me a more nuanced understanding of its still, often-puzzling focus, Glatze (played in the longer movie by James Franco). 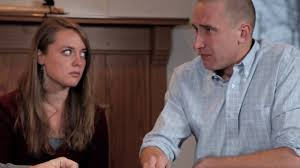 Even today it remains a kind of shocking event, particularly within the gay world, to watch such a committed being as Glatze—who seemingly arrived in San Francisco well-read in theories of gay and gender theory, who would join the staff of the San Francisco-based national  magazine for young gay men, XY, demanding that people not just “accept” but “celebrate” they gay sexuality, and who dedicated many years to helping young gay boys, many of whom had been thrown out of their homes and were still having difficulty with their sexuality, to find their way into that joyful community—gradually pull away from the gay world and, ultimately, insist the same kind of gay youths he had previously helped must return to the closet and accept Christ in order to save themselves, arguing that “homosexuality prevents us from finding our true self within.”


What had brought about such a radical transition? And how could an individual who had expressed so much love, not only to his partner, Bennett (Zachary Quinto in the movie) and his live-in third lover Tyler (Charlie Carver), but to so many young gay and lesbian women, suddenly turn his back on them to seek out the love of a fellow Christian fundamentalist woman? The hypocrisy seems so apparent to outsiders that it wounds those of us who remain  proud gays. 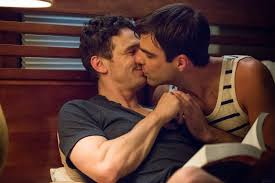 Certainly Kelly’s film, at times, does make out Glatze to be an impenetrable villain, but for many in its audience it almost seems justified. Moreover, the movie does attempt to show the slow drift away of Glatze from the causes to which he was so committed. Nycum argues that the changes were part of a larger breakdown exacerbated by Glatze’s sudden panic attacks  when he begin to fear that he had inherited a heart disease that killed his father; the film does attempt to convey this shift, although Franco in his brooding inarticulateness seems unable to explain what is actually happening within Glatze’s head. Stares into space and an obsession with reading and cataloging the Bible simply don’t add up to his sudden turnabout. Quinto and Carver are left, in many scenes, with nothing to do but look shocked.


Even Denizet-Lewis’s original essay on his friend, Glatze, puts those radical changes into the context of such a short period that we can only rub our heads with wonderment:

A lot had happened in the decade since we last saw each
other: he and Ben started a new gay magazine (Young Gay
America, or Y.G.A.); they traveled the country for a docu-
mentary about gay teenagers; and Michael was fast
becoming the leading voice for gay youth until the day,
in July 2007, when he announced that he was no longer gay.

To be fair, Glatze had long argued that sexuality was not simply a “this or that” issue, that is was not like a suit one put on to never take off, sexuality being a shifting thing, ideas which have become increasingly popular in the years since with our rising understanding about transgender individuals who have taken years to recognize their true identities.


In Nycum’s film we meet a Glatze that is still loving and caring, his wife and him having turned against the more fundamentalist Christian teachings to create a sort of non-denominational church that accepts anyone who wishes spiritual guidance. And a bit oddly, he seems to explain all the most fundamentalist notions of religion to be based upon greed.


Glatze’s wife, moreover, does appear to be a loving and kind soul which nearly anyone might seek out. Nycum, himself, praises her:

Well for starters I adore his wife, I think she's an
amazing woman, she's someone I would love to
hang out with, I could see myself being attracted to her.
So from that perspective I was so relieved that
Michael had this person in his life.

The film also gives nod to this idea, as we watch Glatze’s girlfriend discovering on the internet what several of her fellow women students already knew, that Michael had previously been an outspoken gay man.


What the film also makes clear is that Glatze was seeking all sorts of spiritual possibilities, including the meditation he might find in Buddhism. Although we do sense in that search a kind a manic confusion, since he seems attracted to idea as much by an attractive young Buddhist, Nico (Avan Jogia), whom he quickly beds, as for its spiritual concerns. Indeed, because of his constant Christian quotings, he was asked to leave the retreat.


Standing back, after reading and seeing all three of these recountings of Glatze’s internal shifts, one recognizes, first of all just how powerful were those who love him—Nycum, Denizet-Lewis, and Michael’s wife—and, secondly, that perhaps, as his fellow XY colleague, Peter  Ian Cummings, once queried: was Michael ever really gay?

At a very young age, he had all these very well thought
out theories about identity and sexuality. Maybe this gay
or queer identity that fascinated him, and that he had taken
on, wasn’t really true for him. It doesn’t explain why
he says such ridiculous things about gay people now,
but maybe, just maybe, he’s not in denial about his
own sexuality.

I, personally, have known at least two straight men who suddenly went through a kind of gay transition, acting out sexual activities and what they thought was gay behavior before later abandoning them; and I have one openly gay friend who seems to behave far more like a straight man in his sexual attractions.


In retrospect, it seems that what Michael Glatze was seeking all along was a kind of spiritual identity, something which could bring order and meaningfulness to his life. Surely the rave parties he and Nycum attended in the Castro or even their seemingly joyful ménage a trois relationship with Tyler might have made the peaceful sense of spiritual well-being that Michael was seeking difficult. Despite his denials, perhaps the gay world was, for Michael, something like a suit he put on and couldn’t easily take off. It took a radical awakening (a familiar refrain in the American spiritual tradition) to permit him to seek elsewhere for his religious meanings, and it appears in Nycum’s documentary that he has not quite yet found.


In the gay world, “cruising” is a term generally used to describe a search for someone to have sex with in a bar or on the street; hopefully, a search for someone to love. Michael uses the same process to search for spiritual meaning without recognizing the immense sacrifices such a search entails. Perhaps he has finally found peace in his small Wyoming church. One can only hope so, and none of those who loved him wish him to suffer. But then, surely, he already has, and caused others to suffer as well.