Pier Paolo Pasolini (screenplay, based on the plays of Sophocles, and director) Edipo re (Oedipus Rex) / 1967, USA 1984


There are several directorial intrusions and flourishes in Pier Paolo Pasolini’s film version of the Oedipus Rex story, but the most essential difference is that, somewhat inexplicably, he begins the story in the 20th century, with the birth of a young boy to a handsome father who is a member of Mussolini’s militia. The loving mother, Jocasta (Silvana Mangano) attempts to placate her husband’s immediate hatred of the child he feels is stealing the attentions of his wife, but without success. Perhaps these are, so the director suggests, the emotional responses of many fathers to their sons’ births—Pasolini is said to have “hated” his own father—and Pasolini is simply demonstrating his personal mythological link to the actual Sophocles dramas. 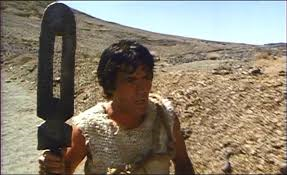 In any event, the film suddenly shifts to a Northern African landscape wherein, in ancient times, a child is being taken into the wild by a servant to be slaughtered. As in the Greek story, the servant cannot bring himself to kill they child, and leaves it to survive in the wilderness, with another passerby almost immediately coming to the baby’s salvation.


The rest of Pasolini’s version is plotted very much like the original. But it is the Moroccan landscape and the amazing costumes by Danilo Donati that make all the difference, along with the strange almost ritualistic actions that the director imposes. This Oedipus (Franco Citti), growing up in the loving home of Merope (Alida Valli) and Polybus (Ahmed Belhachmi) is almost a spoiled young man, who, after hearing the terrible warning of the oracle,  determines that he must leave Corinth.


It is, of course, on the pilgrimage that he encounters the arrogant Laius (Luciano Bartoli), his real father. But unlike the original where it seems like Oedipus’ murder of Laius is the result of a sudden misunderstanding of the right of way, Pasolini presents it as a determined act of rage, as the young Oedipus must battle and kill at least three other guards before attacking Laius.


By the time Oedipus reaches the huge palace at Thebes, accordingly, the handsome young man is already a kind of legend, and able to quickly do away with the Sphinx before marrying Laius’ widow.


Pasolini, casting one of his favorite young “toughs,” Citti,  as Edipo shows the young man almost as a child a play in his role of King, donning a preposterously imitation beard that seems to mock the Babylonian emperor Nebuchadnezzar, while obviously sexually satisfying the still-beautiful queen, who just happens to be his own mother. As The New York Times critic Vincent Canby observed when Pasolini’s film was first shown in the US in 1984, the actor “has the rough good looks of a boxer, but the performance is so stolid that when the camera comes in for a tight close-up of his eyes—as it frequently does—one sees only a pair of disembodied eyes.


The rudimentary stone palace set against a hostile desert landscape seems to reiterate the same message that someday this whole edifice, a prop of the greatest proportions, may suddenly collapse back into the sands from which it has sprung. All it takes, of course, is the appearance of Tiresias (Julian Beck) to begin Corinth’s downfall, ending in death and a blindness that is, perhaps, not so very different from the arrogant young man’s insistent innocence of his own destiny.


If Pasolini’s telling of the great drama, at times, is utterly cold, so too are the rituals which its heroes are asked to play out. Despite the director’s general delight in his films of demonstrating the carnality of life, here the characters never truly strike fire, despite the innocent perversity of their acts.