survival of the unfit
by Douglas Messerli

Superficially, the third film of Roberto Rossellini’s “war series,” Germany, Year Zero, seems to the most loosely episodic and open-ended of these works. But actually, the seemingly formless street ramblings of the film’s young hero, 12-year-old Edmund Kohler (Edmund Moeschke), are tightly interwoven with events that come to symbolize both the moral corruption of the German people and their inabilities to come to terms for their recent Nazi past.
It is the fact that Rossellini puts nearly the entire weight of these events on the shoulders of his young lead (a boy he felt looked very much like his own son, Romano, who had recently died at age 9 an appendicitis attack, and to whom the film is dedicated) is perhaps what made many critics of the day find his movie to be sentimental and melodramatic. Certainly the determined symbolic heft of the events that occur in Edmund’s wanderings suggest that the filmmaker was clearly moving away from his neo-realist roots. This is a picture with a pre-determined statement, not a depiction of real, everyday events. 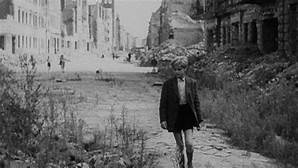 Yes, this is a street movie, filled with young boys and girls, peddlers and pimps, thieves and gang-members; yet their various encounters with the young boy are not accidental, but representative of the fragility of post-War German culture, if you can even define the free-for-all struggle for survival in the bomb-pocked landscape as representing any culture at all.
Edmund is forced onto the streets because his other family members have all become unable to cope. His father (Ernst Pittschau) is sickly and gradually starving to death; the only good days for his family is when he gets temporarily moved into a hospital, where he is well-fed and they have a bit more of whatever they can daily scare together to share with one another.
The boy’s brother, Karl-Heinz (Franz-Otto Krüger), dare not even go out, since, having fought “up to the last moment” in the same neighborhood, he has determined not even register and is fearful of being arrested. Had he registered, at least, the family might have been allowed another ration card.
The family’s sister, Eva (Ingetraud Hinze) spends most of her nights, with another woman living in the same building, at bars, where she pawns free cigarettes, drinks, and whatever else she might come across—although she refuses to engage in prostitution, which at least might have put more food into their mouths. 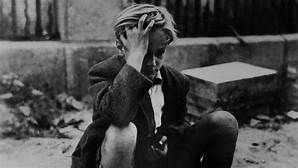 So it is up to Edmund to forage for a few potatoes, a couple cans of processed meat, and whatever else he might get for selling a neighbor’s scale or a former teacher’s record of an Adolph Hitler speech—played loudly on a record player to the very citizens who have been destroyed by its propaganda—to British or American soldiers.
While children of the same age are seen playing soccer and other games, Edmund, unwelcome to join in their games, carries around his satchel as if he were wearing the weight of the earth on his shoulders, which, symbolically, he is. For him, and dozens like him, there is no childhood to be had. A former teacher, Henning, clearly a pedophile, living in a house of like-minded men, fondles him while demanding he sell the Hitler record, another of residents hovering nearby if Edmund might escape Henning’s clutches. The sexually innocent escapes the ordeal with ten marks for his sale, but another girl, Christl, hardly older than he, seems to have sexually hooked up with a gang-leader who offers subway customers perfumes with nothing inside, grabbing the money from the hands of any girl who might be tempted to buy. 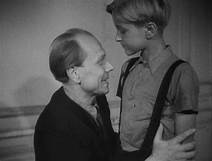 If Henning cannot get into his shorts, he does get into Edmund’s head, with his message of the survival of the fittest; in a world which is literally playing out this concept, is it any wonder that Edmund determines to act, stealing a bottle of poison and offering it up to his dying father with his tea. In doing this, of course, Edmund, himself, stands in for the millions of regular German citizens who willingly went along with Nazi dogma; yet Rossellini is perhaps also suggesting that it is necessary that the young should quickly do away with the old if a new Germany is to survive. In the war-torn Berlin of this film there is no room for niceties, and Edmund’s schoolteacher’s lessons have relevance for such an exhausted child.
Yet, Edmund also does represent a cultural shift, if only in the guilt for having accomplished the act. He attempts to find Christl to confess his action; but she, having now moved on to others, has no time for an innocent child. And when he returns to Henning, we see the pedophile with an even younger boy in tow, about to commit his dreadful act, who has no time for Edmund. When he momentarily turns to talk to Edmund, the elderly pedophile neighbor quickly scoops up the chick. When Edmund confesses to Henning, the dreadful monster pretends shock, reminding one a bit like the James Stewart character in Hitchcock’s Rope, when confronted by his former students’ murder of a peer. But Henning seemingly relents if only Edmund might let him grasp him in perverse forgiveness. The boy, understandably, runs off in horror, without even comprehending, surely, the nature of his schoolteacher’s pretended succor.
The child who is no longer a child watches others at play, but unable to join it, kicks a rock down the street as if playing kick-the-can, wandering up into the bombed-out ruins of his own apartment building. Below he watches as a truck takes away his father’s coffin, along with many others it has collected en masse. For a moment the boy covers his eyes as if he has seen too much.  And before the viewer can even imagine what is going through his mind, he jumps to his death.
Even the future, so Rossellini suggests, is in utter jeopardy. It is perhaps only those who no longer even attempt to change their future who can survive, a kind of zombie culture that lives by just hanging on.
If this film is sentimental, then I don’t comprehend the meaning of that word. Melodramatic? Perhaps; it is an exaggerated time that I feel Rossellini has so credulously captured on film.
Having seen Peter Brook’s play Battlefield, another post-holocaust examination, just a few days earlier, I was reminded yet again of Beckett’s words at the end of The Unnameable: “I can’t go on. I’ll go on.” Perhaps, in the case of Germany, Year Zero it is only the most unfit who survive.


Posted by greenintegerblog at 8:54 AM