Suri Krishnamma | A Man of No Importance


by Douglas Messerli
Barry Devlin (screenplay), Suri Krishnamma (director) A Man of No Importance / 1994
The title of Suri Krishnamma’s 1994 film A Man of No Importance, despite its bow to Wilde’s A Woman of No Importance, is almost a judgment of the film’s intentions; writer Barry Devlin along with the competent director, take a man of very great presence and importance, the wonderful Albert Finney, and turn him in to a slightly suffering man of the 1960s for whom love has come far too late—transforming him from a real human being into an unimportant one who will surely be forgotten upon death. 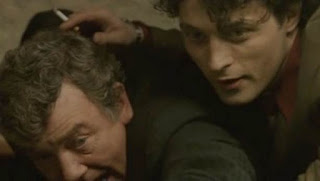 The Dublin of the early 1960s cannot even recognize the well-spoken, self-educated bus conductor, Alfred Byrne (Finney) for what he is—despite the fact that he goes about spouting lines from books of poetry, produces Oscar Wilde drama in his spare time, and is an expert chef serving up home-cooked specialties for his courser and completely uneducated sister, Lily (Brenda Fricker), who stubbornly refuses to eat even the simply spaghetti and sauce he whipped up, arguing something to the effect that she doesn’t like to eat food from such a dirty country.


No one in 1963 Dublin seems to be even slightly aware of what homosexuality is—except that it’s the second worse crimes against the human body, presumably losing out, just by a little, to murder. Shocked by the news of the recent Profumo scandal, in which the doctor to high society members, including those in the governmental cabinet, was accused of providing call girls, the Irish of this film mix up his doctoring practices with a the imaginary sin of “homo-a-pathy.”


One might almost describe Alfie as sharing, like Ralph Ellison’s hero, the condition of being an “invisible man.” After all, he has lived some 60 years without behaving like any of those around him, his locked room filled, so his sister gossips, “with books.” The mostly elderly regulars of his bus, who all love his recitations of poetry and drama every day, don’t see him at all as “unimportant,” but just somewhat eccentric, a kind of gifted, special bonus for the otherwise boring bus commutes. And even the handsome young bus driver, Robbie Fay, who is not at all “fey,” does not recognize that in calling him Bosie, Alfie is claiming, like Oscar Wilde, his love for the young man. No one, it seems, has ever heard of “the love that cannot speak its name,” at least not the beautiful Adele Rice (Tara FitzGerald), who, without recognizing the meaning of the play, is perfectly happy evidently to play Salome in Alfie’s amateur production in a local church.


And, of course, it is that upcoming production which lands Alfie, apparently for the first time in his life, in hot water. The local butcher Ivor J. Carney (Michael Gambon), over whose shop the Byrne’s live, and who annually has performed in Alfie’s productions of Wilde’s The Importance of Being Earnest actually bothers to read his friend’s newly proposed play, and finds it utterly “salacious,” an offensive work with dire moral consequences. For anyone who’s seen the opera, one can hardly blame him—particularly given the bourgeois morality of the Dublin citizens of the day.


With Alfie’s sister, Carney plots Alfie’s downfall, at first by attempting to hook him up with a woman—in this case the newly pregnant Adele to whom Alfie has so suddenly taken an interest—and, finally, by protesting the play to the church board, particularly to the slightly confused Father Ignatius Kenny (Mick Lally).
But even then, given the fierce support of his bus passengers who act in most of his productions, Alfie might have gotten away with it were it not for his sudden late-life temptations, aroused most certainly by the young lover of Adele and his long-smoldering attraction to his Bosie. Convinced that “the only way to get rid of temptation, is to yield to it,” Alfie attends a local bar where gay boys are apparently openly for sale.


Dressed up as Wilde himself, he asks the cutest of these boys, Kitty (Paudge Behan) for a “cuddle.” The cuddle ends up in a nearby alley, with Alfie laid flat with a slug to his eye, his billfold emptied, and a policeman standing over him.


By the next morning, the entire community has heard of the event. Adele is on her way to England to have her baby, and Bosie/Robbie has been scared away from his bus companion by the ever malevolent Inspector Carson (Patrick Malahide). His sister speaks in disgust: “When I think of where your hands have been!” The play is over, the commedia è finita, or, at least, the great work of art that Alfie imagined his staging to be will not be possible.


The saddest thing, as Alfie moans, is that his hands “have never been anywhere! I’ve never been close enough to anyone to so much as rub up against them, let alone put a hand on them. Me hands are innocent of affection.” By film’s end, Alfie’s bus-riding customers continue to stand by him, and his Bosie returns, open and ready to continue his friendship with the man. But Alfie, nonetheless, is now just an empty old man who has never had the opportunity to truly experience love. Had only Krishnamma’s film allowed him that opportunity! If Alfie remains a survivor, he remains a man without anything to really survive for except perhaps the memory of his beloved works of literature, like his life, things of a long ago past.
Los Angeles, June 14, 2017
Posted by greenintegerblog at 9:31 AM